The Words of Angels

Nothing Is Impossible with God

Or something so long awaited that everyone has given up hope. If the memory of that hope lingers at all, it lingers as a sore that hurts to be touched.

Just think of Abraham and Sarah, wandering around in the wilderness for ever-so-long and then some. They’d left everything, to wander around with a God they could sense but not see, try to obey but never understand, a God who did not do things for them, but expected them to do things that made them afraid.

They’d been promised a child, and many heirs. You will be a great people, God has whispered to Abraham. Or had Abraham wished it, so much he thought he heard God say it? Because, you see, no child had come to them. It had been years since Abraham had made himself a son with Sarah’s maid, Hagar.

Then one day, along came three angelic visitors. No fancy robes. No noticeable wings. But Abraham could tell they were special. And he knocked himself out entertaining them – he made Sarah cook her best meat and cakes. And then the angels said, they’d come for Sarah, to tell her she would conceive, right then, in her old age.

Lot had an angelic visitor, a fellow without wings whom the villagers  in Sodom took to be a stranger with evil intentions. And they threatened him, the stranger. If he’d looked like a Christmas card angel, the villagers wouldn’t have done that. They were mean cusses, but not stupid, after all.

And the angel, who brought destruction down on the town because of their cussedness and lack of hospitality (not because of homosexuality, that old canard!), told Lot to take his wife and family away – and never to look back.  You remember the rest of the story, how Lot’s wife was turned to a pillar of salt because she looked back. It may be the hardest thing in the world, not looking back.

Think of Jonah. He took a ship in the opposite direction, then jumped overboard, in order to get away from want the angel wanted him to do.

And Gideon. He was in his winepress, treading out the grapes, when the angel came and told him he was going to be in charge of a war, and he groaned No about a thousand times, and set out quite a number of tests to make the angel prove he was a real angel.  And then he had to do it, and he waged and won a war without killing, a war without bloodshed. It’s the only war in the Bible ordained by God, and the only one in which no one died.

So Gideon ended up a hero, sort of, and also a damn fool, which had been his reputation before the angel came.

The trouble with all these soul enchanting medieval paintings is that the angels are so very beautiful, and mesmerizing in their presence. But the Bible doesn’t describe them that way. 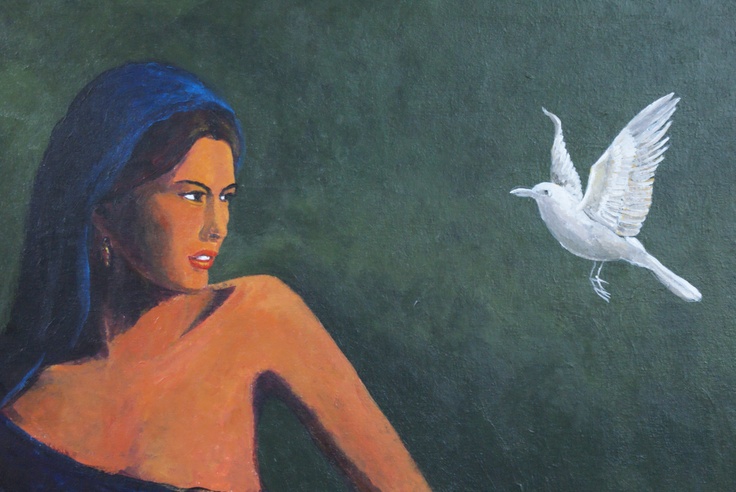 In fact, the details we get are few. The angel who announced Sampson’s birth to his mother rose up from a fire and was made of flames. Isaiah said he saw seraphim robed in black, with six wings. With two they covered their faces, he said, and with two their feet, and with the other two, they flew.

Jewish folklore, which is about as biblical as are medieval paintings, says somewhere that the Archangel Gabriel has one hundred and forty pairs of wings. How he could lift off and fly boggle the mind, and how anyone could hear him over all that flapping beats me.

The poet Sylvia Plath likens  Gabriel to a black rook in rainy weather, saying of the Advent season we are in:

I only know that a rook
Ordering its black feathers can so shine
As to seize my senses, haul
My eyelids up, and grant

A brief respite from fear
Of total neutrality. With luck,
Trekking stubborn through this season
Of fatigue, I shall
Patch together a content

Of sorts. Miracles occur,
If you care to call those spasmodic
Tricks of radiance miracles. The wait’s begun again,
The long wait for the angel.
For that rare, random descent.

And here we are, arriving at that rare, random descent, when the Archangel, whatever his guise, whatever his mien, suddenly, and quite unexpectedly, appears to Mary and greets her, saying, Hail, Mary, full of grace, you have found favor with God.

When the angel tells her that her cousin Elizabeth is also bearing a miracle child, she accepts, and sets out on her own on a journey of about forty miles, to see Elizabeth.

On her way and in her heart, and from her heritage of faith, she composes her song, which has come to be known as the Magnificat.

In it, she declares in the strongest possible way that the Child she is gestating has a destiny to scatter the proud in the imagination of their hearts, to pull down the mighty from their thrones, to exalt the lowly, to fill the hungry with good things and to send the rich empty away.

Meanwhile, the Angel Gabriel is wrestling with Joseph in his dreams, persuading him to accept this boggling reality – and to marry Mary. And the angel will be back, according to Matthew, after the birth, to get them out of Bethlehem before the massacre Herod is planning begins.

I dream of angels who will help me, enfold me. Ah, but the ones who come to people come to challenge, not to comfort.

Thank God for Mary, who was up to the challenge. Who did not submit, as much as she took command. Mary, who did not diminish herself, but, astonishingly, magnified God. Mary, who welcomed kings and some rather scruffy shepherds, and then ran away to Egypt to save her child, using, we presume, the gifts given to her to buy food and lodging for her little family.