Over the past several years, the Pew Center on Religion and Public Life has become the go-to place for solid descriptive statistics about all religions, including Christianity.  They just realized a report on Global Christianity.

The report highlights how Christianity has become a worldwide religion.  Here’s the executive summary:

A comprehensive demographic study of more than 200 countries finds that there are 2.18 billion Christians of all ages around the world, representing nearly a third of the estimated 2010 global population of 6.9 billion. Christians are also geographically widespread – so far-flung, in fact, that no single continent or region can indisputably claim to be the center of global Christianity.

A century ago, this was not the case. In 1910, about two-thirds of the world’s Christians lived in Europe, where the bulk of Christians had been for a millennium, according to historical estimates by the Center for the Study of Global Christianity. Today, only about a quarter of all Christians live in Europe (26%). A plurality – more than a third – now are in the Americas (37%). About one in every four Christians lives in sub-Saharan Africa (24%), and about one-in-eight is found in Asia and the Pacific (13%)

That’s a remarkable amount of change, and something that is great news. Here’s one of their many maps that illustrates just how spread out Christianity is. 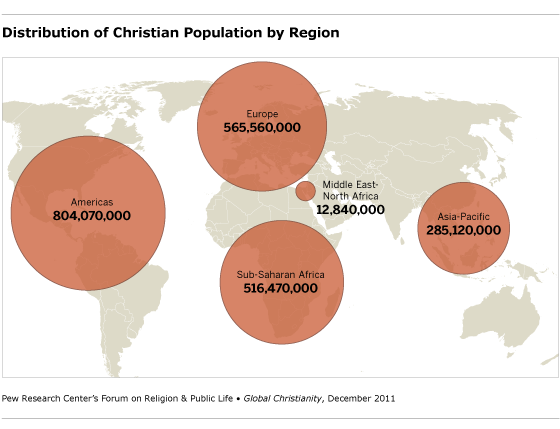 December 21, 2011
Leisure and Worship: A Christmas Message
Next Post