Let’s start with an admission: I’m a fan of new urbanism. And old urbanism, for that matter. It sort of makes sense as a sociologist and someone who is invested in long-term strategies for growing families and cities while retaining permeable cover for farmland, etc. I’m always impressed with old stories about big families in small houses. Ergo, I live in an overpriced townhouse in a high-density neighborhood not far from the middle of Austin. And I generally like it, if mostly for lazy reasons: no yard to mow; low maintenance; feeding off my neighbors’ energy usage—via shared walls—to reduce the cost of my own. (Some) decent kids nearby for the young’uns to play with. Good stuff.

But the green movement which thrives in this new urbanist community is, from my angle, not just another interest group. It bears characteristics of what sociologists of religion would call a “new religious movement,” a subject of longstanding interest to scholars I used to hang out with. To be sure, the green movement is not a religion in the way we typically understand the term, and doesn’t have worship services per se. But that doesn’t mean there isn’t worship going on.

Borrowing from Christian Smith and others whom I cannot immediately recall, think about the ways in which the environmental movement fits this definition of religion: it’s a group phenomenon; concerned with the sacred; has a body of beliefs; has a set of practices; and it includes moral prescriptions. We do things for the things we worship, which technically is a term that means to “affirm the worth of.” We pay them a lot of attention. We offer up time and talents to them.

So when my neighbors hold an annual “hug the lake” event, outdo each other to (ironically drive long distances in order to) buy up the available Chevy Volts, serve as ground zero for Earth Day in Austin, and exhibit sustained one-upmanship about their personal environmental efforts, I start to feel like I’m a bad environmentalist and that I need to confess my sins–a full trash can, no bicycle, two cars, no solar panels–and return to affirming the beliefs and practicing the rituals, no matter the cost. (But I draw the line well short of a compost toilet.) Can’t I just be a new urbanist? Not really, because that is settled simply by living there (that is, by being in the same “congregation” of sorts). To be truly devout, I would need to set myself apart from my fellow congregants by exhibiting greater sacrifices. I need to be part of the 20 percent of the congregation that does 80 percent of the work. Free riding, after all, is a classic problem in religious organizations.

It all sounds like religion to me. Which is not surprising, given the claim I just made about what religion is and does. It need not be about the supernatural. It’s about the super-empirical: humans treat many things in life as sacred that are immanent, that have nothing to do with unseen beings.

We all worship something. It’s in the design. 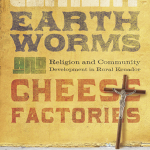