This summer, I have the opportunity to travel to Brazil with Calvin College’s Nagel Institute, for a seminar focused on understanding how Pentecostals are interacting with and shaping globalization forces.  This question of how religious actors around the world understand and conceive of economic life—and in particular, aspects of increasing economic liberalization—is a central focus of my research.

I’ve recently finished Jill DeTemple’s 2012 book, Cement, Earthworms, and Cheese Factories: Religion and Community Development in Rural Ecuador (University of Notre Dame Press).  It’s one of the most recent books to look at a question that is growing in importance to a number of development scholars: How religion and development are intertwined and interconnected. 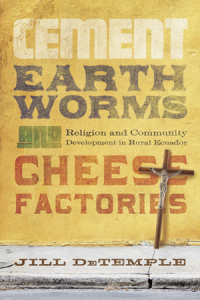 In discussing  historical trajectory of development, she makes a convincing argument that many of the colonizing impulses behind ‘economic development’ and Christian proselytization in the West are similar.

I’ve written on this question of the aims of development before. DeTemple’s work focuses more on the ways that religious and development goals get intertwined in specific places and contexts, and the lack of distinct boundaries between the two. But in telling the stories of communities, she shows that many times the goals and assumptions of development workers and ‘those being developed’ are not the same. The ends of development are re imagined.

One of the foundational aspects of development for many in the industry is economic growth (which I recently addressed).  So how are religious actors engaging with this largely uncontested belief?  In my book manuscript, I focus on how religious actors discuss and frame free trade and economic globalization.  What’s fascinating to me is the way that across a number of Christian traditions, religious voices continue to raise questions about the real goals of development and growth, almost universally critiquing our emphasis on economic individualism and a lack of concern about responsibility and relationship with neighbor.  And just as fascinating to me is that even as there seems to be much agreement among religious leaders, these voices are largely muted in public economic debates.

In understanding how Pentecostals in Brazil are engaging with globalization, I look forward to seeing the ways that actors on the ground—those engaging with poverty reduction and interacting with development programs—are part of a larger religious conversation about the value of growth and development.  As I continue to engage further in dialogues on religion and development, I’d love to hear other examples you may have of how religious actors are challenging global values and structures of current globalization paradigms in their micro-level efforts.

March 13, 2013 Conversations with Robert Bellah
Recent Comments
2 Comments | Leave a Comment
Browse Our Archives
get the latest from
Evangelical
Sign up for our newsletter
POPULAR AT PATHEOS Evangelical
1