Religious Affiliation and the Frequency of Orgasms

A apropos of nothing, here are some data about religion and sex. They come from the National Health and Social Life Survey (NHSLS). This study, was conducted by Edward Laumann, of the University of Chicago, in 1994, so it’s getting a bit old, but it remains a great study on the topic. It collected data from 3,400+ people nationwide on just about every aspect of sexual behavior. Fortunately, for my purposes, it also collected data on religious affiliation.

From the NHSLS, here are the percentage of respondents who report “always having an orgasm” when they have sex with their primary partner.

May 23, 2012
Three Things I Love about Teaching Sociology of Religion Online
Next Post 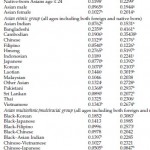 May 25, 2012 Poverty and the "Model Minority"
Recent Comments
8 Comments | Leave a Comment
Browse Our Archives
Related posts from Black, White and Gray