This is the last entry of my series based on my latest book entitled What Motivates Cultural Progressives. My basic argument is that cultural progressive activists shaped a social movement that meets the needs of the people in that movement, who tend to be white, male, wealthy and highly educated. Over the past three entries I identified church/state separation,, rationality and progressive politics as the basic values within this movement.  Those values are not exclusive to each other and in many ways support a basic ideology promoting the social and cultural interest of cultural progressive activists.

How social movements frame their actions tells us a great deal about how individuals in those movements justify their participation in it. We know that people in social movements find ways to “frame” their movement that justify their participation in the movement.  In this entry I will look at the collective action frames driven by this movement. Specifically, I will focus on their diagnostic action frame, whereby movement participants argue what has gone wrong, and motivational action frame that illustrates why movement participants take the actions that they do.
The values discussed in the first three entries provided insight into what cultural progressive activists see as major problems in our society. The intrusion of “irrational” conservative Christians are seen as a threat to the benefits of progressive, and in their minds rational, politics. This is the major problem many of the respondents discussed.

They are anti-choice, pro-death penalty, largely pro-gun, against social programs, anti-science, in favor of tax breaks and other political favors for the rich, and seek to allow their religious views to dominate American government. (female, aged 26-35, high school diploma).

I’m opposed to the idea that the government should regulate morality.  I object to their lack of appeal to reason. I object to the selective weeding out and subjective interpretation of portions of the bible that are used to support their views. I disagree with their political stances – all the ones I’m aware of. (female, over 75, some graduate training).

These, and other quotes I can produce indicate that these respondents perceive a wide variety of social and political problems connected to conservative political and religious influences being imposed on our society. These respondents clearly perceive political progressive reforms as desired outcomes. Religion being practiced at home is not a threat to those reforms and was not often conceptualized as a social problem. However, conservative religion outside of the church and home can influence society in ways that hamper efforts towards a progressive society and is seen as a problem cultural progressive activists seek to address.
Understanding what cultural progressive activists see as the major source of problems in society puts us in a better position to understand what motivates them. Their motivations build on why they perceive the Christian right as a social problem. For many of them the irrationality of religion is not only a barrier to progressive society, but also poses a dire threat to our freedoms.

Christian fanatics have not yet reached the stage of active persecution but it is only a matter of time to where they become as bad as the Islamic fundamentalists. (male, aged 56-65, Master’s Degree).

Some of this group wants to establish a theocracy and to have all laws and rules confirm to Biblical law.  They will use any means to accomplish their goal to undermine democracy, so that their theology can dominate. (male, over 75, some graduate training).

Fear is a powerful motivational tool that social movements can use to maintain loyalty and commitmentIt is often difficult to persuade individuals to provide resources to a social movement based purely on the vision of a better society. It is useful to play upon the concerns and fears of those individuals to assure that they support the movement. Thus, it is not surprising that primary literature from some of the organizations run by cultural progressive activists paints Christian conservatives as a powerful enemy that must be defeated at all costs.

The United States is home to dozens of Religious Right groups. Many have small budgets and focus on state and local issues; the most powerful organizations conduct nationwide operations, command multi-million-dollar bank accounts and attract millions of followers. They have disproportionate clout in the halls of Congress, the White House and the courts, and they wield enormous influence within the political system.

Ultimately what motivates cultural progressive activists is their perception of themselves as providers of a rational, progressive political society and protectors from the imposition of an irrational Christian theocracy that resembles the Taliban. This perception fits the identity of such activists as being more rational and intelligent than their political and religious opponents. Given their socially advantageous position in society it is easy to see why they perceive themselves in this way. This identity meets a critical need for individuals  with such societal advantages and this social movement, like other social movements, not only forms to achieve the explicit goals stated for the movement but also to provide social benefits for the members of the movement.
Once we understand this motivational source we are in a better position to comprehend our ongoing culture war. Both sides of the war have a vision of society they perceive as ideal. For both sides the alternatives to that ideal is unthinkable. For conservative Christians the unthinkable may be a society that has lost the blessing of God while for cultural progressive activists to lose the culture war means the imposition of a repressive Christian theocracy. Given the stakes perceived by individuals on both sides of the culture war, there is no reason to think that this war is going away anytime soon. Furthermore, while the Christian right has the advantages of reaching many people through thousands of religious institutions, cultural progressive activists have advantages with their majority group status on many fronts. Given the strong power base of both social movements, we should not expect either the Christian right movement or cultural progressive activist movement to soon disappear. 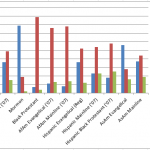 October 22, 2012 Why "Fact Checking" Falls Short
Recent Comments
7 Comments | Leave a Comment
"Is "proof" something that scientists engage in? Isn't proof a term more applicable to brewing ..."
Beau Quilter Bill Nye, the “not-so-science” Guy
"I'm going to say I disagree with you: I also have concerns about the misuse ..."
IamGrimalkin Bill Nye, the “not-so-science” Guy
"George is right, Sam. Republicans and others only ask for the right to practice their ..."
True Why I am Supporting the American ..."
"If the "right to worship as you wish" means following scripture like Genesis 2:24, they ..."
True Why I am Supporting the American ..."
Browse Our Archives
Follow Us!