“War on Christmas” and Symbolic Hostility

Recently much has been made at this time of year of what has been called the “War on Christmas.” Given the relevance of this topic, allow me to share some of my research published in 2010 that provides insight about this potential war. I cannot find the article online but you can look it up [Review of Religious Research 52(2):159-171] at a local university library.

My original purpose was to argue that possession of religious animosity is not limited to certain groups. Previous research indicated that political conservatives, the highly religious, and the uneducated tend to have religious animosity. But that research generally looked at animosity towards Muslims, Jews or the unreligious. I asked whether those with animosity towards conservative Protestants would come from a different social and demographic group.

I used data from the American National Election Study. They had a series of “thermometer” questions whereby individuals indicated on a scale of 0 to 100 the degree of affection they had with different social groups. Higher numbers indicated more affection for a group. I picked out the seven religious designations (atheist, fundamentalist, Muslim, Hindu, Jewish, Catholic and Christian) and looked at the thermometer scores for all seven groups. (I know that some will dispute using atheists as a religious designation but clearly it is useful to assess attitudes toward them if we are looking at religious tolerance.) I found what I expected to find. Political conservatives and the highly religious as well as those with lower levels of education possess lower thermometer scores towards atheists. Political conservatives were more likely to have low thermometer scores towards Muslims. However the reverse was true when it came to fundamentalists. It was political progressives, the highly educated and the irreligious that had lower thermometer scores toward fundamentalists. These results held up even after applying regression controls for sex, age, race, and region of country.

By the way, some may argue that attitudes towards fundamentalist do not adequately measure attitudes towards Christians. Technically it does. Fundamentalism is a Protestant movement which emerged in the early 20th century. Yet, it is a term that has been misused by some as they talk about other religious groups as some people have used the fundamentalist term when discussing Muslims or Jews. However, in the context of asking the question in the United States, most individuals think of Christians when they hear the term “fundamentalists”. In our country, fundamentalist has clearly become a pejorative term representing conservative Christians.

Knowing who tends to have animosity towards certain religious groups provides insight into the “War on Christmas.” But it is also important to comprehend the degree of animosity that exists towards religious groups. To assess this, I averaged the seven thermometer scores and then noted  if any of the scores were at least a standard deviation below the average. If it did then I decided that this was a group to which that individual possesses a significant level of animosity. So if a person gave 100 to all of the groups except Muslims but gave Muslims 70, which is a relatively high score, that person still has animosity towards Muslims since generally that person provides high scores for different religious groups. This way I can assess animosity in those who rank all groups very high as well as those who rank all groups relatively low.

Clearly the group that faced the most animosity was the atheists. Using this measure, about 27 percent of the respondents indicated a lack of affection towards them. This comports with previous research showing that atheists are the least trusted religious group in the United States. The second “least liked” group is fundamentalists. A little more than 11 percent of the respondents indicated such dislike. But close behind were the Muslims. A little less than 8 percent of the respondents fell into the category of rejecting them. The difference is not enough so that I have confidence that fundamentalists are rejected more than Muslims, but clearly they are not rejected less than Muslims. None of the other groups registered much with this measure and thus these are the three most rejected religious groups in the United States.

That fundamentalists are rejected at least as much as any other group other than atheists is significant. Some may argue that 11 percent is too low of a percentage to be concerned about. There is concern among many people, myself included, about the problems of Islamophobia in our society. But my research indicates animosity that is at least as intense toward Christians as it is toward Muslims. If we are to be concerned about Islamophobia then does this not suggest that we should be concerned with Christianophobia? Such a concern also provides insight about a “War on Christmas.” Furthermore, those with Christianophobia potentially have a more powerful social position than those potentially with Islamophobia. Remember that those with animosity towards conservative Christians are more likely to be white and well-educated. Those are qualities that provide social status and power.

Nonetheless, it can be argued that we should not be concerned about Christianophobia since it is not Christians that experience violence in the United States. Some contend that it is mosques, and not churches, that are physically attacked. (Although there is information here, and here  that disputes this notion). They may argue that Christians do not experience violence. I tend to agree that Christians are less likely to be the victims of violence because of their religious beliefs than Muslims, although I do not have any research that supports that inclination.

But just pointing this out misses the real question which is how do political progressives, the irreligious, and the highly educated exhibit religious animosity. They may not do it with violence, but it is naïve to believe that such individuals do not show hostility towards their religious out-groups. To get a clue as to how they do so, I look towards the research and theorizing around what is known as symbolic racism. Symbolic racism is built on the notion that whites with animosity towards minority groups do not want to show that animosity with issues obviously tied to racism. But on issues that have racial and non-racial components they can exhibit this animosity. Few people would openly state that they hate Hispanics. But those that do may support a highly restrictive immigration policy since there are non-racist reasons for supporting this policy. This gives them “cover” against accusations of racism while allowing them to symbolically support their animosity towards Hispanics.

Given the propensity of the highly educated and political progressives to avoid being labeled as intolerant, symbolic racism is a good way to understand how animosity towards Christian conservatives may be expressed. Individuals with this animosity are likely hesitant to openly express it but that animosity can come out on issues where a different reason can hide a hostile expression. Resisting expressions of Christmas is a way to accomplish this.. Individuals can make a religiously neutral argument of protecting church/state separation even as they oppose expressions tied to conservative Christians. Actions that lead to complaints of a “War on Christmas”, such as opposing nativity scenes, refusing to call a Christmas tree by its proper name, or even protesting a Charlie Brown play are likely to come from mixed motivations. It seems likely that some individuals are motivated by the principles of church/state separation while others are motivated by their antipathy towards Christian fundamentalists. While I cannot confirm that speculation, I find it hard to believe that the significant percentage of highly educated individuals with anti-fundamentalist animosity fail to express it. Issues allowing them to combine that animosity with a principle tied to religious neutrality allow them to express their hostility.

What does this tell us about the possible “War on Christmas?” I have no reason to believe that there is some organizational attempt to fight against expressions of Christmas. In a real world situation a war is usually formally declared but there is no such declaration of a war against Christmas. However, my research suggests that there is a strong sentiment within individuals with social status to oppose who they define as Christian fundamentalists. Given such sentiments it is naïve to believe that some of the actions taken by activists to limit Christmas expressions are unrelated to an attitude of hostility toward conservative Christians. In this way there is informal support of measures that can fairly be seen as hostile to a Christian expression of this holiday but can be justified with arguments of religious neutrality. The informal nature of this opposition may make it more difficult to adjudicate the complicated issues surrounding holiday expressions since it is not always clear how much of the disagreement is driven by valid principles and how much is driven by religious animosity.

It is illogical to either exaggerate or ignore social elements that can lead the perception of a “War on Christmas.” Educated progressives who tend to initiate those elements are ultimately not different in their propensity to have religious bias than those who engage in cruder expressions of religious bigotry. A healthy approach is to recognize that expressions of religious animosity will vary according to who possesses that hostility. This approach provides a sound skepticism of the actions of educated progressives, but with a compassion that all of us must be careful to monitor ourselves as it concerns those who are in our religious out-groups. 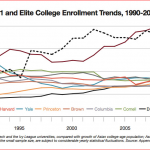 December 22, 2012 Still Retreating from Race: Asian Americans in the Ivy League
Recent Comments
18 Comments | Leave a Comment
Browse Our Archives
get the latest from
Evangelical
Sign up for our newsletter
POPULAR AT PATHEOS Evangelical
1