It’s a festive time of year for Asian Americans. As many readers know, the Lunar New Year celebration kicked off last week, and I hear that in China, the celebration lasts a good deal more than 1 day due to the mass migrations that occur for work-related reasons. For example, last year a PBS documentary called “Last Train Home” focused on the journeys of Chinese workers who often leave their rural villages to travel hundreds of miles for work and return on holidays with their earnings.

And of course this past Thursday was Valentine’s Day. On my Facebook newsfeed, the Pew research Center re-published a news piece from 2009, where they reported on religiously mixed marriages using their massive Religious Landscape Survey (RLS) conducted in 2007. Here’s the main graph: 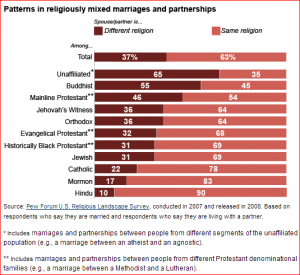 he notes that the most often stated strategy for dealing with religious difference between spouses was not to talk things out and compromise. Rather it was to not talk about it at all. Couples who have the most direct access to the worldview and practices of another faith often fail to connect on the spiritual. Indeed author Naomi Schaefer Riley’s new book discusses this in greater detail in her interviews with married and divorced interfaith men and women.

As I noted before, advanced survey techniques allowed Pew to conduct a national survey of Asian Americans in 2012 in several major Asian languages plus English. This was a significant improvement over the RLS since that one was only conducted in English and Spanish. So among the 2,536 respondents who reported some Asian heritage in the RLS, one commonality is that the sample consists primarily of English-preferred speakers. This excludes those Asian American households described as “limited English proficient” (LEP). The Asian Pacific American Legal Center used Census data to show that 32% of Asian Americans 5 and older are LEP. The range is quite dramatic by ethnic group: 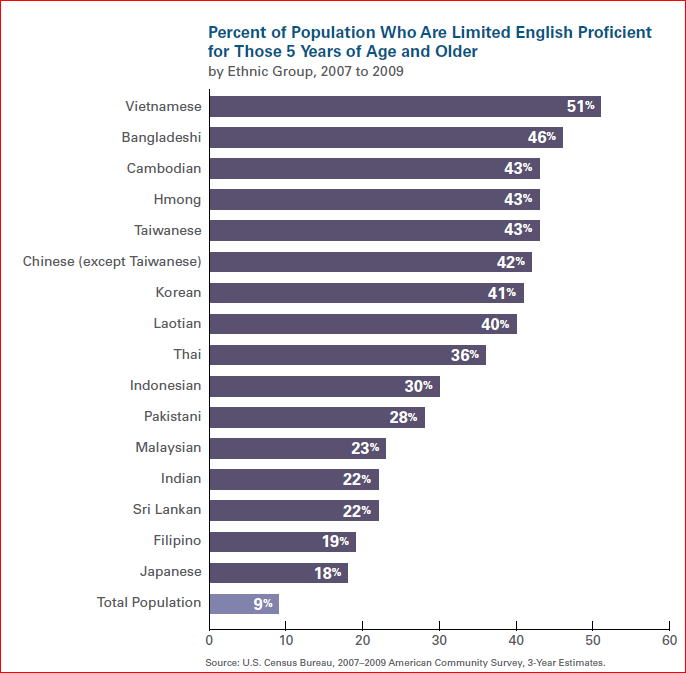 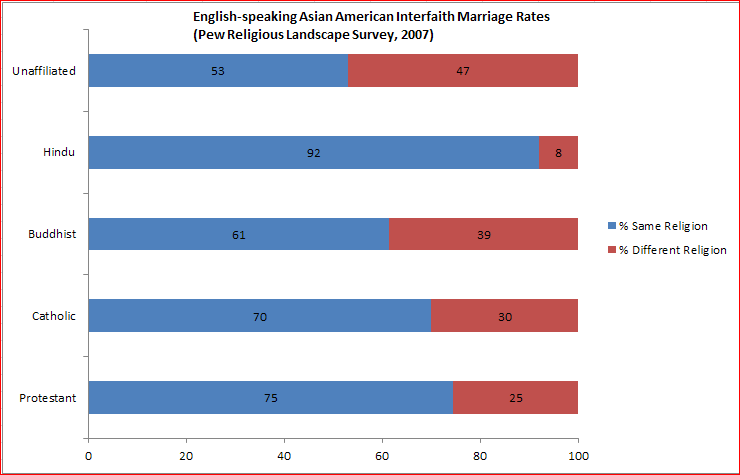 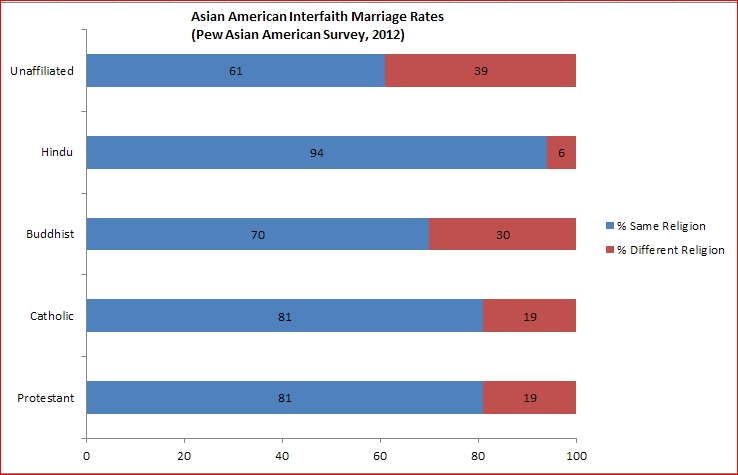 This pattern of greater interfaith marriage among EP Asian Americans makes sense when we apply sociological theories of assimilation to explain the difference between the two surveys. For Asian Americans, perhaps with the exception of Asian Indians, English ability is a function of length of residence (if one is an immigrant, like 59% of Asian Americans ) or simply growing up in the US. If one is more acculturated, religious fidelity likely weakens in the aggregate. So we would expect that a survey of English-proficient Asian Americans will usually show a higher rate of interfaith marriage compared to a sample that includes LEP respondents.

The one remaining curiosity left unexplained is Catholic EP Asian Americans. While 22% of American Catholics are in an interfaith relationship, 30% of Catholic EP Asian Americans are. Using the assimilation framework we would expect the rate to be a good deal higher for non-Asian Catholics. Latinos do make up a substantial minority but I don’t think they are big enough to sway the figures we see. So I ask: why are assimilated Asian American Catholics in interfaith relationships more so than their American peers overall? Send your speculations!

In short, this season has ushered in some time to reflect on relationships, mixed-religious marriage being one form of it. In the American context, these marriages theoretically hold much promise, but often fall short of realizing those ideals of mutual understanding and growth. Asian Americans play a big part in the interfaith marriage world given the large presence of non-Christian religions among them (which we can verify with better survey tools). Figuring out how to make interfaith marriages work is perhaps a more noticeable issue among Asian Americans than other groups; perhaps the stories of thriving relationships will emerge from them in the years to come.

Happy (belated) Year of the Snake!