In a recent post I shared some of the recent statistics reported by the New York Times regarding the change in the Catholic population around the world. Through the friendly comments I received from Dr. Conrad Hackett of the Pew Research Center and a couple other sociologists, I learned that Pew has their own statistics on the global Catholic population. This got to me as I discovered that the numbers I used to create my graphs were largely taken from the New York Times article, which I learned do not rely on the Pew numbers. So how different are they and what does that tell us? 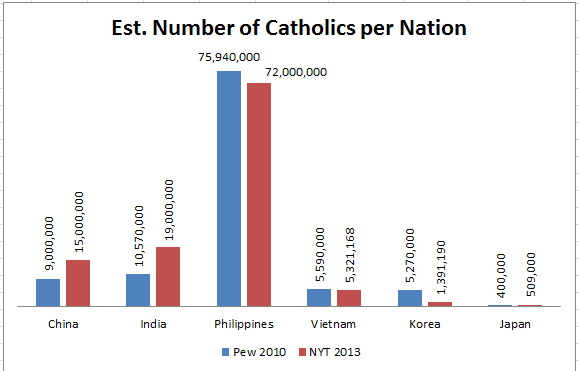 By sheer population size Filipinos dominate, and the NYT and Pew numbers confirm this even though they vary by up to 4 million. The rates for Japanese and Vietnamese Catholics is also fairly similar. The big differences where the NYT shows the higher estimate are China (15 million vs. 9 million from the Pew data), and India (19 million vs. 10.6 million). Pew estimates a higher percentage of Korean Catholics (5 million vs. 1.4 million from the NYT data). What this suggests then is that using the Pew data, Korean and Vietnamese Catholic populations are essentially equal in size whereas the NYT data suggests that Korean Catholics are the smaller sibling to their Vietnamese brethren. And if the nationality of an Asian Pope were chosen based on population, the Pew data suggests that (besides the Philippines of course) it would be a toss-up between China and India, followed by a toss-up between Korea and Vietnam. Based on the NYT data, the Asian Pope would likely originate from the Philippines, followed by India, then China, Vietnam, Korea and Japan. 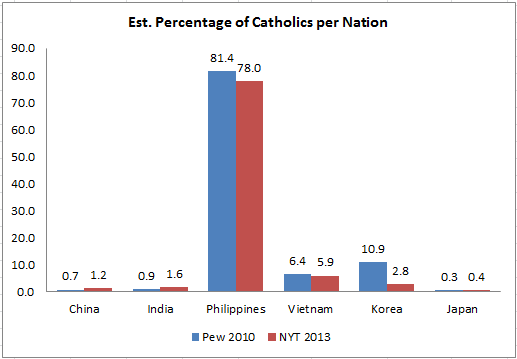 While knowing the raw estimates is interesting, the reference point for those estimates illuminates different impressions. What do we learn when we take the estimates of the Catholic population in each nation relative to that nation’s overall population. In other words, how Catholic are some of these countries in Asian? As a percentage of Catholics per nation, clearly Filipinos dominate as usual, no surprises there. The big difference is between Vietnam and South Korea: based on the NYT data, Vietnam has the higher percentage of its population Catholic at 6%. This is slightly lower than the Pew estimate. But Pew’s figure for Korean Catholics is way higher than the NYT figures (11% vs. 3% of the population) and thus takes the (distant) second place position. To learn more about the proportion of Catholics in different Asian countries, go to this link to a cool interactive map of Christianity in Asia.

Finally, rather than calculating the percentage of Catholics in a nation, the raw estimate of the population of Catholics can be used to compare it with all Catholics in the Asia Pacific region. I illustrated this using the NYT data in the previous post, and I now show it side-by-side with the Pew version. I thought this was interesting to observe because the number of Catholics per nation tells us different things based on our reference point. The 76 million Filipino Catholics (according to the Pew data) make up 81% of all Filipinos, but only 58% of all Asian Catholics. It’s still clearly the lion’s share and it’s particularly notable given that when we’re talking about all Catholics in Asia, we’re including millions of believers from China and India. Despite being a much less populous nation than these two giants, Filipino Catholics are still the majority. The Filipino percentage of Asian Catholics is a bit smaller using the NYT data, at 53%. The rank ordering is pretty much the same for China, India, and Japan’s Catholics (second, third and sixth place respectively). The difference between the two figures shows up most for the Korean and Vietnamese Catholics. Pew again suggests that the share of all Asian Catholics that are from these two countries is about the same (4% for Korea and 4.3% for Vietnam), while the NYT data places Vietnamese Catholics as clearly a larger presence among Asian Catholics (6% vs. 3% for Korean Catholics).

While the big picture hasn’t changed, new sources of data allow us to get a fuller picture of the growing presence of Catholicism in Asia. The quality difference in that data might shift the picture to some degree, but given the fairly close approximations on most of the figures from the NYT and Pew, these appear to be relatively reliable. The consistency of Pew’s track record in getting the best data (oftentimes collecting it themselves which is no small feat) has me leaning more in favor of their sources rather than the NYT. Other observations welcome! 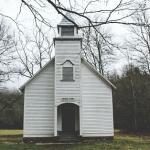