Are We Losing the Young? Evangelicals by Age Since 1972 (Part II)

In my last post, I looked at the relationship between age and Evangelical affiliation here in the US. In this post, I want to revisit the topic but use a stronger form of analysis–cohort analysis. Using data from the General Social Survey, I divided respondents up into five groups–those born in the 1940s, 1950s, 1960s, 1970s, and 1980s. I then calculated the percentage of each of these five cohorts who were Evangelical from 1972 to 2012. Here are the results: 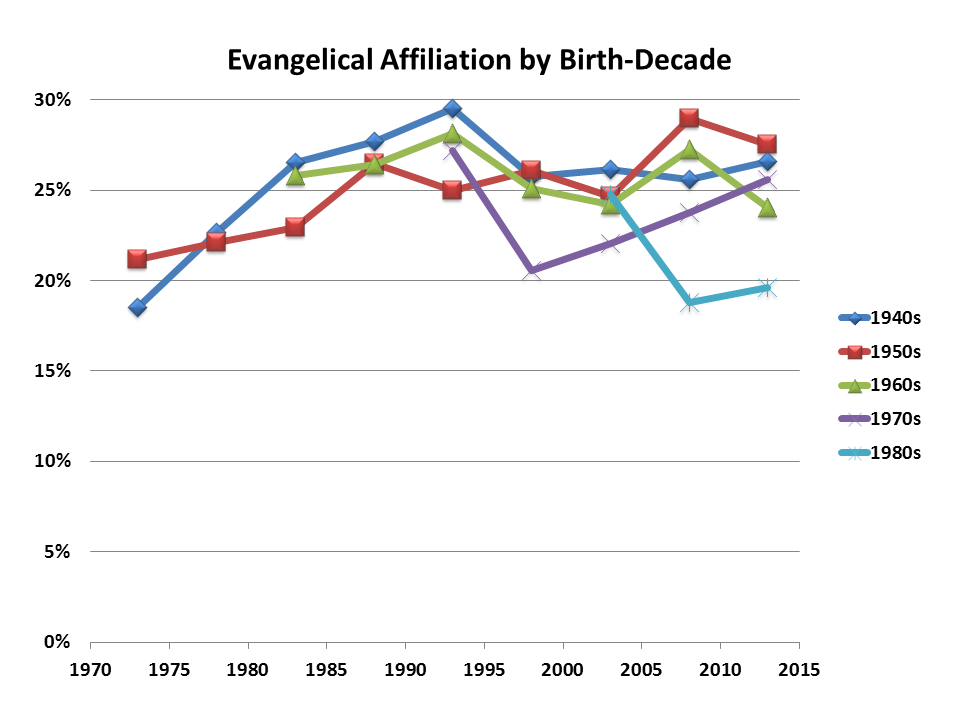 So, the blue line with squares plots the path of people born in the 1940s. In the 1970s, when they were mostly in their 30s, about 18% of them affiliated with Evangelical Christian churches or denominations. That grew substantially in the 1980s and 1990s, but it has dropped slightly since so that now, when they are in their 60s, about 28% of them are Evangelicals.

Its interesting to look at the last two cohorts–those born in the 1970s and 1980s. Unlike previous cohorts, both of them dropped in affiliation in their early 20s, but both trended upwards after that.

I wonder if this initial drop downwards contributes to the hyperbole regarding the young–that Evangelical Christianity is facing an imminent collapse. We see higher-than-usual rates of them leaving in their late teens and early twenties, and we project this trend into the future. That doesn’t seem to have happened to those born in the 1970s, and it’s too early to tell for those born in the 1980s.

While the hyperbole might be a great way to sell books and get people to listen to sermons, I don’t see it born out in the data.

May 5, 2013 Atheists in America - Part 3
Recent Comments
7 Comments | Leave a Comment
Browse Our Archives
get the latest from
Evangelical
Sign up for our newsletter
POPULAR AT PATHEOS Evangelical
1

Evangelicalism: Where have all the young...
Determinetruth
Related posts from Black, White and Gray