News items are useful for teaching but they can sometimes provoke new research investigations. For example

I recently found this item on my Facebook newsfeed (I created an interest page and jammed together all of the major news and national group organizations into a single feed; it’s fairly efficient most of the time). It illustrates the rough contours of the various dialects of English spoken around the US, and brought to mind my previous post on race, immigration and region and linguistic code-switching.

It was interesting to me that the author, Rick Aschmann, was not a social scientist; he claims that this is his hobby! . Given my training, my impulse was to find more sources that might match or improve upon Mr. Ashmann’s assessment. A hobby is one thing, doing it from scholarly expertise is another. Further, I wound up turning this into a social science exercise.

I poked around on the web to see if there were more scientifically based treatments of his accent mapping. In my quick check, it looks like this was quite the hot topic in the late 1990s and early 2000s. Studies at the University of Pennsylvania and Harvard by William Labov and associates (Penn) and Bert Vaux (Harvard then, currently at King’s College)  seemed to garner the quickest hits for dialect mapping. Interestingly there are a lot of different ways in which dialects are identified and it’s fairly challenging to determine the boundaries of where one dialect ends and another begins. Some areas, according to Aschmann, contain a wide range of dialects, chief among these being Pennsylvania.

But as the other studies and their accompanying maps show, there are different ways of classifying dialects which consequently changes the location of the boundaries. Here is Labov’s version of the same area: 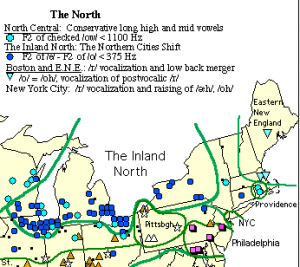 This is important sociologically on two different but related grounds. One is race. While I don’t have systematic evidence for this (that would be an empirical linguistic studies project I think), members of different racial groups might share some dialect patterns in common while at the same time share patterns across racial groups in the same area. So we might ask: to the extent that African Americans are more populous in the South, to what extent are Southern dialects a function of African Americans pronouncing English, and to what extent is it defined by Southern whites pronouncing English? Are regional dialects shared equally across racial groups and do they in some ways reveal commonalities between racial groups or persistent distance? For instance, if two African American families, one with a “Northern” dialect and one with a “South Midland” dialect arrived in Atlanta looking for work, would a white employer’s judgment be affected by the dialect in speech?

The second is immigrant and second-generation adaptation. Immigrants these days are usually drawn more from non-English-dominant environments. How might they relate to the linguistic differences in the environments in which they migrate? Since they were socialized in non-English environments, we would expect that they would have an evident disadvantage in trying to adapt to the local dialect. However, their children might not have this hurdle. So what might the English dialect of the second-generation sound like based on region? Let’s take second-generation Korean Americans (SGKA for short) for example. The ones in California where a large fraction of SGKAs reside might exhibit a Western dialect whereas the ones in Philadelphia and New York might pick up an Atlantic Midland or Greater New York City dialect. This too is complicated by the degree to which their linguistic exposure at home is entirely in the native language of their immigrant parents or that amazing mashup we call Konglish.

So I started to think about whether dialect discrimination might also play a role in unequal job hirings. Do employers hire those who sound like them over whether someone looks like them. Sociologists note that there is often a lot of subjectivity in job placement, and in many cases identically-skilled candidates might be differentiated on grounds like “fit” etc. So I hypothesized a few possibilities on what might happen in an experiment that tries to determine dialect or racial discrimination:

-H0: Irrelevant. Hiring a worker is completely unaffected by hearing dialect differences. This is what social scientists call the null hypothesis.

-H1: If race matters more, differences in dialect will not affect hiring of a worker.

-H2: If regional dialect matters more, proximal dialect similarity to the employer will favor one worker over another.

If I could imagine this experiment, you would need 4 types of applicants (all with equivalent credentials so basically they are all the same on paper), two who are white, two who are black. One interviewee from each race exhibits the “Inland South” accent and one interviewee from each race has the “Atlantic Midland” dialect. We need employers that meet the same criteria: 1 set who are white with an Inland South dialect, 1 set of white employers with an Atlantic Midland dialect. Ideally, we would have African American employers in both of these categories too, but they may be harder to find. Since dialects are a function of location, the interviewees need to visit these employers from both parts of the country. If we had a lot of funding, we could replicate this experiment and bring in second-generation Asian and Latino Americans with these same dialects to determine racial versus dialect bias. This is something like an audit study which has been done several times in demonstrating subjective evaluations in hiring decisions.

A study like this could help reveal new complexities in our diversifying environment. 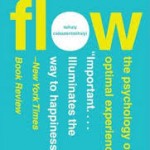