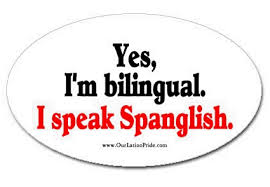 In a recent post I shared some reflections on the importance of second-generation Asian American research. While attending this conference I had the privilege of spending time getting to know my new colleagues who shared similar research interests. As much as scholarship has an autobiographical influence, it’s not surprising that members of the immigrant and second-generation share an interest in second-generation outcomes. In conversation over coffee or massive Korean meals, I was reminded of the challenges that many professors face who did not grow up in the US. While gifted in their particular profession, a common dilemma that many face is language accessibility. We all know that we make distinctions between people who “speak like me” or who “speak good English.” It’s a subtle acknowledgment that there is a dominant culture embodied not only in the words and syntax but in the manner of speech itself. It’s also a way of acknowledging embeddedness in a linguistic community. In most situations, if you’re part of a community that speaks the language and tone of the dominant culture, you will likely have little problem experiencing otherness from most people you encounter on a day-to-day basis. For many immigrants and their children, the second-generation, this is unlikely. Most immigrants today do not come from English-speaking nations and their access to this language varies by education and personal skill. So when I think about many of my foreign-born research-university colleagues I am struck by the hurdles they must overcome to do their job well. It’s not enough that they can analyze statistical data or interpret the activity of a local community, they have to articulate this in their secondary language both on paper and in person. Will they be discriminated against if someone reading or listening identifies non-native language capacity? The process of getting tenure and promotion is anxiety-ridden already; imagine adding on language access and you might have a slight understanding of what life is like for faculty who are immigrants.

Language access is less likely a problem for the second-generation since most of their experience has been in the US. They have been exposed to media, teachers, and their multigenerational peers to make sense of “proper English.” They are also aware that their parents continually struggle with grammar and syntax in ways that native speakers take for granted. For some second-geners, they resort to limiting their own language ability to more effectively communicate with their immigrant elders and peers. This mix of foreign and native words along with a restructured grammar and syntax is known variously as “Spanglish” “Konglish” “Chinglish” and the like. For the second-generation, they have the challenge of code switching, the practice of adapting one’s language and behavior to one’s specific context. With their immigrant community they speak in another language or in some hybrid form as I just mentioned. National Public Radio for example has a post on several different popular examples of how code-switching works, and another on how it sounds in our popular culture.

What code-switching also reveals is the tacit awareness that the dominant culture enforces its expectations on our language ability and it places a kind of cognitive bind on those who navigate multiple linguistic environments. I suspect that for many in the second-generation, the pull is to conform, which can (but not always) weaken language ties to their ethnic culture. In order to fit in with the dominant group, their capacity to articulate the language most familiar to their immigrant community drifts from high fluency to near incoherence. Think about your second-generation friends and how many of them are very fluent in the language preferred by their immigrant parents, and how many of them code-switch using a hybrid of English and another language. Here’s an example of Indonesian, French and English code-switching:

And here’s an example of English and Japanese (apparently a class project that’s garnered over 13,000 views!):

It’s not only second-generation Americans that deal with linguistic marginalization from the mainstream. Scholars and activists have been well aware that even native-speakers have varying acceptability to the dominant group based on an audible accent. Some people “sound black” or “sound hick,” and in these cases, discrimination also rears its ugly head. Not surprisingly, in some multigenerational American families that experience potential upward mobility, successive generations sound less and less like the community from which they originate, and more and more like the intonations that dominate our media. This has been documented in a study of the central Texas accent, as narrated in this NPR story.

As Texans gain more influence in American society, the desire for respectability entails a weakening of the central Texas accent. Here again we see this inescapable pull toward conforming to the dominant group that clearly sounds different from them. In this way, it’s interesting to observe how marginal multigenerational groups function similarly to second-generation groups that grapple with language in their journey toward upward mobility.

Update 7/11/2013: the sociology website The Society Pages included this post abut the archiving of the German Texas accent which is slowly fading out.