Recent news on the higher education scene has turned attention to the Asian American case, or cases we should say. A team of education researchers led by Dr. Robert Teranishi used data from the Census Bureau’s American Community Survey and the University of California higher education system to make the case that Asian American ethnic groups are not all performing in the “model minority” way. As some readers know, Asian Americans tend to be grouped together as if they were a racial equivalent to “white” “black” and sometimes “Hispanic.” When this kind of grouping occurs, scholars and interested citizens look for similarities and differences between racial groups on outcomes like educational attainment, household income, poverty levels, health etc. From this classification approach Asian Americans tend to appear exemplary on a number of outcomes. Take for example, last year’s Pew report on Asian Americans. Using the American Community Survey, Pew shows an aggregate figure for bachelor’s degree attainment and median household income in 2010 for Asian Americans. As the title of their figure states “Asian Americans Lead Others in Education, Income.” 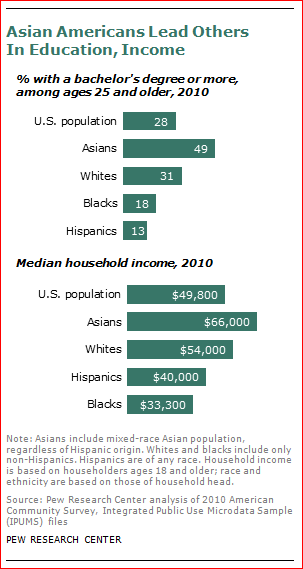 Teranishi and colleagues’ report disaggregates, that is, splits into smaller groups, the Asian American classification using the same data, and this is what they find. In this first graph we see bachelor’s degree attainment across multiple Asian American groups and we find surprising differences across the board. At the one end, Taiwanese and Asian Indian Americans report over 71% within each group with a bachelor’s degree. At the other end, about 12% of Laotian and 15% of Hmong Americans claim the same educational attainment. So while it is the case that Asian Americans as a group appear to have a lot of education, the reality is that only certain groups are showing this level attainment. 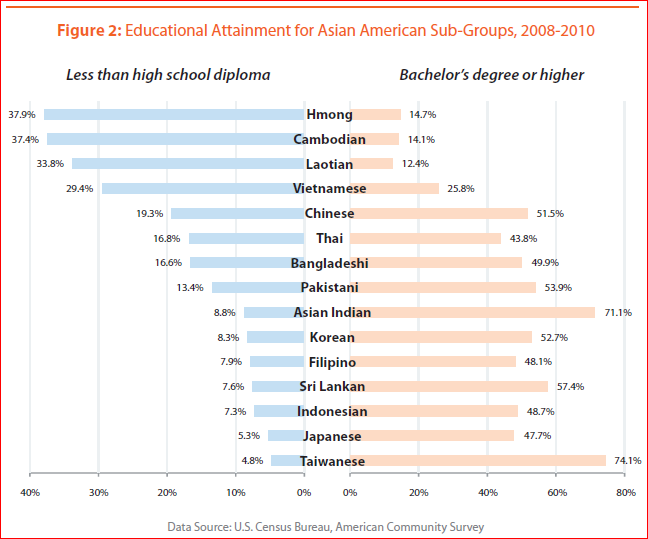 Now let’s look at household income. Using the median household income ($66,000 according to the Pew report) for all Asian Americans, Teranishi et al. disaggregate that figure and show the following. 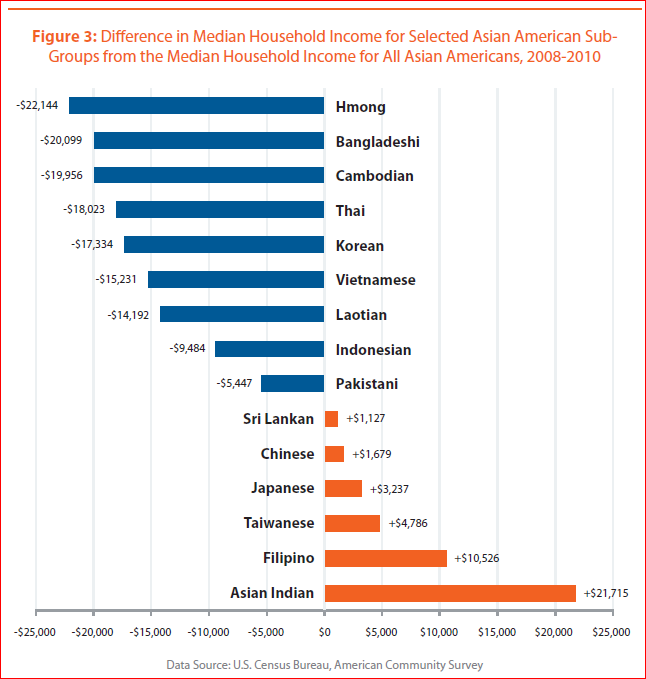 What this suggests is that Asian Americans are highly diverse socioeconomically. To the extent that the model minority myth is applied to this collection of SES-diverse groups, it masks the evident differences among them. Read the full report here to find out more about the benefits of disaggregation especially in higher education within the University of California system. Similar kinds of analyses were conducted by Dr. Paul Ong and associates who disaggregated homeownership and cash public assistance rates across Asian ethnic groups in several different areas of the US. The slide show report on some of their findings is here, and the regional reports are here. Like Teranishi et al.’s report, disaggregation of Asian American homeownership, other assets and public assistance shows that the rates of these socioeconomic patterns vary a lot by Asian ethnic group.

Some might ask: then why is the overall Asian American average so high to begin with. The answer is a matter of population size. Look back at the disaggregated figures. Pick out these groups: Chinese, Filipino, Indian, Vietnamese, Korean, and Japanese. These groups take up 83% of all Asian Americans. Statistically, the other groups are not numerically large enough to alter the educational attainment or household income average of the largest six groups since they take up a greater share of the population. We should remember too, sizable numbers of Asian Americans in the larger groups do not share in the picture of “success” that their same-ethnic peers experience.

In our racialized society, we like our groups to be simple; we prefer to ignore the diverse realities within the groupings we create. By using “Asian American” as shorthand for “the successful minority” we mask major differences in the outcomes that presumably all Asian Americans share. Notably, our social programs often utilize this assumption and give next to nothing for vulnerable Asian Americans. This in turn makes Asian American inequalities invisible.

Hopefully more leaders and concerned citizens will grow aware of the problem we create when we use the stereotype of “the high –achieving, hard-working minority.” Reports and studies, like the one produced by Dr. Teranishi that disaggregate the Asian American data story expand our own understanding that this story is not just diverse culturally, but socioeconomically as well.

June 5, 2013
Flow: Let’s Get Serious about Leisure
Next Post