This past summer I continued my readings in social scientific and popular readings of ethnicity, race, and religion. In one popular reading I was introduced to early 20th century Chinese history through the perspectives of nationalists and Christian converts. More than a work of history, it is an invitation into Chinese mythology and the sense of the spiritual that animates the minds of many young people. 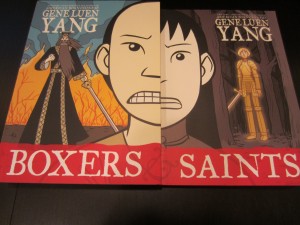 Noted author and artist Gene Luen Yang, a second-generation Chinese American, recently published a two-volume series called Boxers and Saints. Told from two different perspectives, it revisits the Boxer Rebellion of the early 1900s as seen from two young Chinese people, a man and a woman. Boxers, the larger of the two works sets the stage for the events that are retold in Saints. It’s reminiscent of the two-part film series by Clint Eastwood chronicling the Battle of Iwo Jima from the perspective of US forces (Flags of Our Fathers) and Japanese forces (Letters From Iwo Jima). For film fans, both Eastwood and Yang’s works are preceded by the classic film Rashomon directed by Akira Kurosawa.

For those wanting to know more about the Boxer Rebellion, Boxers and Saints is an easy introduction into this pivotal moment in world history. I say “world history” because while it takes place in China, it is very much the story of western imperialism and evangelicalism which prompted these events in the first place. Yang, an educator at heart, ends both volumes with a list of readings that helped shape his understanding of the events he chronicled. My focus in this post is on the work’s significance for Asian Americans, particularly those with a religious background.

Boxers invites us into a world filled with Chinese gods and demigods who inspire and empower young peasant men to resist what they see as an encroaching Western presence in their homeland. Westerners and their foreign religion of Christianity are cast as devils that must be purged from the land, and only the power of China’s old gods can resist them. Saints similarly imagines a world visited by Catholic saints from the perspective of a young peasant woman who is introduced to this religion by foreign missionaries from the west and converts she meets along the way. She is empowered by Saint Joan of Arc to side with the religious Westerners, Catholic and Protestant missionaries and new Chinese converts. Interestingly, from the perspective of the Christians, the Boxers’ violence is not spiritualized as demonic but rather remain an earthly violent force set on killing them. The turn to the saints is for physical protection.

What struck me was the introduction of this spiritual dimension which plays a significant part for both the participants in the Boxer movement as much as the Christians. In typical readings of these moments, the spiritual is irrelevant apart from a few sidebars of the folklore that ran through local villages who encountered the Boxers or the Christians. But for Yang, the spiritual is very much a part of lived reality and whether it is “real” in some scientific sense may be less important than the notion that spiritual characters motivate people to act in heroic, compassionate and violent ways. Such is the power of belief whether Chinese mythology or Western Christianity, at least during this period.

Boxers and Saints accomplishes more than presenting two sides of an event. For readers who are second-generation Chinese American (or know someone who is) and searching for a sense of rootedness, this work highlights a part of the history that they likely have not heard in any course they have taken in school or college. And perhaps it is not told by their family members who are often working long hours to make ends meet. In the contemporary context, without available resources to help young Chinese Americans take hold of their Chinese roots, their ethnicity might signify little if anything. Boxers and Saints becomes an important means by which ethnicity can be socialized for young people. Sociologists note that ethnicity and religion are both social constructions; understanding Chinese identity and Christian identity require materials that describe the origins and meanings for the group’s existence, along with rituals, and relationships with others who help reinforce what one is learning. In this way Boxers and Saints, geared at a younger audience, is one such material resource to help inculcate a sense of being a part of the folk religious Chinese people and Christian Chinese people.

Given the fairly strong presence of Christianity within Chinese American circles (about 30 percent based on last year’s Pew Research Center survey on Asian Americans), the second book, Saints, serves a similar function as Boxers by conveying a sense of rootedness with a faith that perhaps seems distal to their Chinese heritage. Reading Boxers and Saints still conveys a sense that Christianity is not Chinese culturally; it is imported by white Westerners. But it does remind readers that Chinese Christians have been around for more than a century. Wrestling with this reality, and coming to terms with it is an important exercise, and perhaps one that could be done in community for these young men and women.

Boxers and Saints extends beyond the Chinese American community as well; second-generation Asian Americans have fairly diverse networks relative to whites and blacks. For those who have friends in the Asian American community, this work can help introduce a perspective that is altogether new as well. It invites non-Asian Americans to consider what it might mean to be both Chinese and American (read: Western). In particular it asks us to think about what it means to be rooted in a culture that is animated by a pantheon of gods rather than one God? With that in mind, what might it mean to encounter the god of foreigners particularly in the midst of geopolitical turmoil involving exploitation? As Chinese immigration continues steadily through the 21st century, successive waves of second-generation Chinese Americans will continue to face these same questions of identity be it religious, ethnic or both. Boxers and Saints could prove a useful tool in helping individuals and groups understand their place in the world, and their place in history.

September 22, 2013 Science and the Questioning of Our Biases
Recent Comments
0 | Leave a Comment
Browse Our Archives
Related posts from Black, White and Gray