I heard this story from Bodhidharma‘s childhood recently and I wanted to share it.

As a child, Bodhidharma was the third son of a king in south India. His father was deeply interested in Buddhism. The king invited a famous dharma teacher named Hannyatara to the palace to give teachings many times. One day the king was really impressed with a teaching and he gave Hannyatara a beautiful jewel.

Hannyatara showed this jewel to the sons of the king. The first and second sons praised it, saying it was the most beautiful thing they had ever seen.

Bodhidharma said something else. He said that although the jewel was great, the real treasure is the mind, the light of wisdom is greater than the light of a jewel. He was seven.

Hannyatara told the king that his third son would go far in life.

When his father died, young Bodhidharma meditated in front of his coffin for a week.

Then he left the palace to become Hannyatara’s student.

There’s a message in this story that I like. The message is that you are good. Your nature is good. Your mind is a precious jewel. We forget that sometimes. We think awful things about ourselves and we poisons our minds in countless ways. But 7 year old Bodhidharma wants to remind us. Your mind is more precious than a jewel. 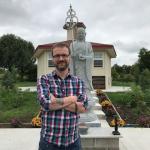 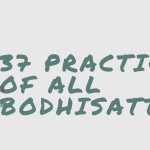 May 15, 2020 37 Practices of a Bodhisattva (video series)
Recent Comments
0 | Leave a Comment
"1) He gave himself the name tathatha (one who is here now) The name Buddha ..."
LuLu The Buddha and the Truth About ..."
"I just don’t put myself on a pedestal like some teachers do. Thank you for ..."
Daniel Scharpenburg I’m Too Busy to Meditate
"This post seems to not come from a real teacher, it seems to come from ..."
LuLu I’m Too Busy to Meditate
"That was beautiful. I notice people in Buddhism community talk about death, but not suicide ..."
Brianna LaPoint Grieving and Death
Browse Our Archives
get the latest from
Bodhisattva Road
Sign up for our newsletter
POPULAR AT PATHEOS Buddhist
1