Kathy Griffin has no respect for her fellow women OR her country December 8, 2016 Bristol Palin

Would it hurt some people to have a little respect for others these days?

Obviously, that’s too much to ask for Kathy Griffin who can’t seem to muster any human decency while out in public. It’s no surprise that she is upset that Donald Trump was elected president, but for a high-profile Hollywood liberal feminist, you’d think she’d be at least courteous to a fellow woman even if that person is a Fox News host. Of course, you’d be wrong.

At The Hollywood Reporter’s Women in Entertainment breakfast Wednesday morning, Megyn Kelly spoke to the crowd and offered her cautious support of Trump saying, “I have high hopes for him despite the tweets and all the rest of it. There is much to admire about Donald Trump.”

Unable to contain her hatred, Griffin blurted out a loud “boo.”

Gracefully, Kelly told her to “stop that” and added, “There’s room for the loyal opposition in this country, absolutely.”

But Griffin continued, this time with her middle fingers raised and a classy, “F*** him!” for all to hear.

She is so tasteless.

I’m reminded of what it says in the Bible, Romans 13 for example, where God wants us to humbly submit to the governing authorities no matter who is in charge because he calls that right and good. But that is a lost concept these days. Humility and respect are out the window. You see this play out in classrooms where kids are disrespectful to their teachers, or when a suspect is mouthing off at the police officer, or from customers screaming at the McDonald’s employee who is trying their best to get the order right.

And Griffin’s actions here are another prime example of where society is.

There is no respect in this country – and people like Kathy Griffin need to grow up! 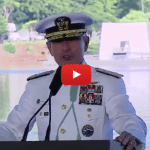 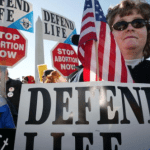 December 12, 2016 Ohio continues protecting babies with passage of “heartbeat bill”
Browse Our Archives
get the latest from
Politics Red
Sign up for our newsletter
POPULAR AT PATHEOS Politics Red
1