No, Bill O’Reilly, the ‘x’ does not mean I’m trying to take the Christ out of Christmas or Christianity.  The ‘x’ is reminiscent of the Ichthys, the Jesus fish you see on some people’s cars, the ancient Greek symbol for Jesus used by early Christians, perhaps as a symbol on a home indicating that a Christian community gathered here, possibly an allusion to the ways that fish represent food and work in ma 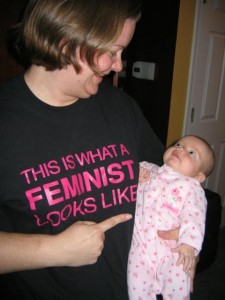 ny parables and stories throughout the Bible.

Although … my car sported the cheeky Darwin fish in the mid-nineties, and you won’t usually see me sporting any religious symbol as accessory these days.  The only one I treasure and occasionally break out is the small Black Hills Gold cross given to me by my grandparents when I was baptized in our family’s Lutheran church as a two-month old in South Dakota.  I once realized that I was perfectly willing to trot around (holding my friend’s kids) wearing my “This is What a Feminist Looks Like” t-shirt while mostly uninterested in advertising my faith on my t-shirt or jewelry.

Truth be told, feminismxianity made a great and usable Twitter handle when I signed up in 2009.

Both feminism and Christianity are inherently complicated and multifaceted things, a point I discuss in my book.  Reducing either to a t-shirt or symbol or tweet is bound to miss the point.  Because while yes, I am what a feminist looks like, so is Barack Obama.  I may live and write and think in the Lutheran tradition, and so do a whole host of other people that don’t look or live or write like me.

I welcome you to this blog.  I intend it to be a space where we can live and write and think together … conversations at the intersections of feminism and Christianity, which for me always include politics, religion, social justice, and pop culture.

July 11, 2017
What I Won’t Write About Mary Daly for the Encyclopedia
Next Post