Religious Freedom Is For Everyone

What’s wrong – and right – with the role of faith in American politics today?

It is wrong that the mantle of religious freedom is being carried by a small minority of leaders who are actually interested in protecting their own ability to impose their religious ideology on others.

Here’s how I put it in an earlier post on this blog asking “Whose Religious Freedom?”

When the U.S. Council of Catholic Bishops launched their Fortnight for Freedom, a two week period of “prayer, study, catechesis, and public action” from June 21 – July 4, it was to unite and rally Catholics against impositions on its teachings and practices.  Really, it was about contraception and ongoing efforts to enforce a uniformly more conservative theology.

The banner of religious freedom flies high in political discourse today.  But it’s important to understand whose religious freedom is being defended and protected.  Let us imagine for a moment what the reaction would be if imams around this country organized ‘Ramadan for Freedom,’ a month of prayer, action, and reflection designed to protect Muslim rights in this country, to call attention to places where the right to build a mosque for that worship is in fact under threat.  Would the USCCB and their conservative prayer warriors work as mightily for their religious freedom?

The difference is clear.   But we don’t have to compare apples and oranges to make the point that the religious freedom the USCCB seeks to preserve is theirs alone.  They want you and I to be ‘free’ to do as they want us to do.

“What we know, and what the bishops missed, is that religious freedom deserves more than a fortnight – and it’s about protecting more than the interests of a small group of men whose demands don’t reflect the needs and desires of the people they claim to represent.”

And here’s what I said in that piece that reflects what is right about the role of faith in American politics today:  That progressive people of faith are dispelling the idea that religion is monolithic, and working to protect the right of people of all faiths and no faith to exercise their conscience.

Consider the scores of Christians, including Catholics, whose religious traditions preserve the freedom of women and men to exercise moral discernment and conscience as they form and protect their families.   This is actually what is under siege from attacks by the bishops working to undermine contraceptive coverage and women’s health. 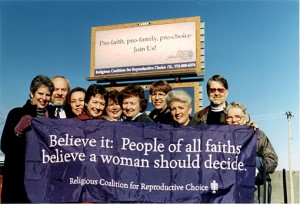 The Religious Coalition for Reproductive Choice mobilized over 200 religious leaders, Protestant, Jewish, Unitarian, Methodist, Episcopal, Lutheran (including this one!), and even Catholic, to endorse a statement on birth control, religious freedom, and conscience.  The concluding sentence reads:

“As religious leaders, we call for public policies that protect each person’s ability to access and use birth control according to their own conscience and religious beliefs.”

This is what a real call for protecting religious freedom looks like.  You are free to decide.  Use birth control, don’t use birth control … only you know what’s best for you.  Your employer can’t decide for you.  Your pharmacist can’t prevent you from obtaining medication because he is opposed to it.  Your church doesn’t decide for you unless you want it to.  Jesus had nothing to say on the matter.

Above all, your local, state, and federal government ought not restrict access to contraceptives because a small group of religious leaders is opposed to it themselves.  Protecting access is, as the statement delineates, an economic issue.  Limiting access to preventative health care, like birth control, disproportionately affects poor women and women of color.

What if the RCRC’s assembled national group of religious leaders had as much sway over the implementation of the Affordable Care Act as the USCCB?  Imagine the difference when religious leaders for reproductive choice pray some of the same prayer found on the Fortnight home page:

We ask you to bless us
in our vigilance for the gift of religious liberty.
Give us the strength of mind and heart
to readily defend our freedoms when they are threatened;
give us courage in making our voices heard
on behalf of the rights of your [people]
and the freedom of conscience of all people of faith.

To that prayer, I will still say … Amen.

Cartoon via  … and picture via 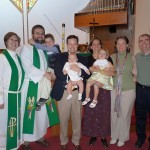 October 10, 2012 Baptism & Reproductive Justice. Really.
Recent Comments
0 | Leave a Comment
"They were all too aware of human perversions then and in the age before. Genesis ..."
Bob Shiloh How Gender Studies Transforms Religions
"I have Eve Wood-Langford's book in my personal library. I bought it because I was ..."
Walter Mattfeld The Most Interesting Chapter in the ..."
"You guys aren’t even close to Christians. You believe you’re better than Christ and can ..."
Kyle Racism, Sexism, & The Holiday Classics
"Even as a reverent agnostic, yet assuming a genuine divine revelation, I wonder how that ..."
John Gills How Gender Studies Transforms Religions
Browse Our Archives
Related posts from Caryn Riswold