When Pants Are Political 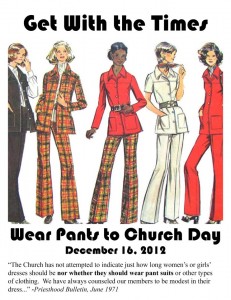 Did you miss the Mormon feminist day of action in December?  It was a small and significant moment for women in the Church of Jesus Christ of Latter-day Saints.

Wearing pants.  To church.  On a Sunday.

Joanna Brooks explained in a piece at The Huffington Post on December 14:

Mind you, wearing pants to church is not against the Mormon religion. Nowhere does LDS Scripture or church policy command Sunday dresses for women. In fact, since Wear Pants to Church Sunday was announced, one spokesman for the Church said, “Church members are encouraged to wear their best clothing as a sign of respect for the Savior, but we don’t counsel people beyond that.”

But even a gentle break with Mormon social convention, even a modest effort to help progressive Mormons feel less alone in the faith is enough to engender a national reaction, as Wear Pants to Church Day organizers have since discovered.

The New York Times wrote about the event, including some of the backlash and harrassment experienced by the women participating, like this comment:  “What is wrong with all you women??? If you’re not happy with the LDS church, move on, find another place of worship. You will not change Mormon Doctrine.”

It is the kind of comment and harsh challenge that religious feminists very often face.

Brooks offered her defense as a Mormon feminist who has chosen to stay in the church and work for change.  It strikes themes and tones echoed by so many feminists of so many faiths:

And yet we also stay silent. Most of us never say a word on Sunday about how and why traditional gender inequalities matter to us. Some of us fear harsh judgment and outright rejection by members of our families and congregations. We fear upsetting or losing our faith community.

But hiding our differences and questions has costs as well — to those who maintain silence and to the larger faith community. It fosters fearfulness, timidity, inauthenticity and intimidation. It fosters the assumption that all Mormons think and believe alike, and with this is fosters unintended thoughtlessness and carelessness. Not only toward Mormons concerned with traditional gender inequalities but to anyone who doesn’t fit the cookie-cutter Mormon model: from the stay-at-home father and the gay teenager to the new convert and the interracial family.

And thus is written yet one more story in the book of religious feminist activism. 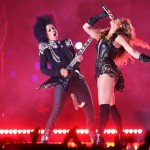 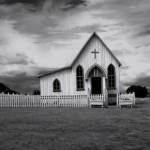