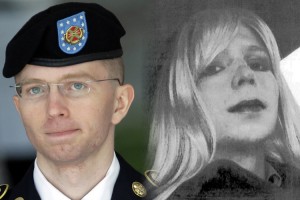 As the trial of Private Manning concluded this August, the convictions on more than 20 counts turned out not to be the big story for many.  Through lawyers, she issued a statement about her gender identity along with a request for the media to use her preferred name, Chelsea:

“As I transition into this next phase of my life, I want everyone to know the real me. I am Chelsea Manning. I am a female. Given the way that I feel, and have felt since childhood, I want to begin hormone therapy as soon as possible. I hope that you will support me in this transition. I also request that, starting today, you refer to me by my new name and use the feminine pronoun (except in official mail to the confinement facility).”

This wasn’t news to anyone who had been following alternative media sources for years throughout the case.  And now, questions about justice for this convicted criminal, questions about what constitutes humane treatment for a transgender person in a military prison, emerge.  Will she have access to hormone therapy? Can she use her self-chosen name? Will she have basic protection from violence and other harm?

In this month’s issue of the Journal of Lutheran Ethics, I have an article titled “Being Woman, Being Human, Doing Justice” in which I bring trans* issues into conversation with Lutheran theological resources around the question of gender justice.

Perhaps social construction, of gender, of race, of class and other things, can also be seen as part of this world. Like civil government, the family, and other institutions Luther and Augustine ascribed to the kingdom of this world, flawed insofar as they are human-made, they are things through which God works toward justice. The human body itself is a temporal reality through which God works, via the incarnation, to bring about spiritual ends. A gendered body is one of these temporal realities.

As Butler describes it, “Gender is the apparatus by which the production and normalization of masculine and feminine take place along with the interstitial forms of hormonal, chromosomal, psychic, and performative that gender assumes.”

Along with being produced and performed, gender also involves hormonal and chromosomal elements. It is the biological body within the social reality. Similarly, Lutheran theologian Mary Elise Lowe states in a 2009 article that “queer theorists also assert that human identity is unstable and that individual subjects come to be amidst discourses such as law, medicine, economics, and religion.”

In referring to individual subjects, Lowe turns attention to our self-understanding and awareness. This is fundamental in discussions of gender identity, personal identity, and it is what Luther sees as human life coram meipso.

How does our theological and political advocacy advance justice for women when the category of ‘woman’ is complicated by looking at the confluence of, as Butler notes, hormones, chromosomes, psychic, and performative reality? Or, taking into account, as Lowe names, discourses of law, medicine, economics, and religion?

What is a woman? Really?

In the article, I then turn to discussions about queer theory and trans* scholarly activism, using work like Julia Serano’s 2007 book Whipping Girl: 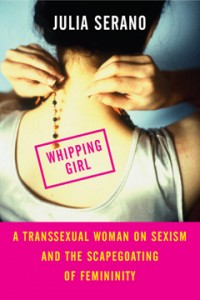 Serano actually challenges strict social constructionism when it comes to understanding gender. Here is how she describes the term trans and the reality it reflects:

“I will use the word trans to refer to people who (to varying degrees) struggle with a subconscious understanding or intuition that there is something ‘wrong’ with the sex they were assigned at birth and/or who feel that they should have been born as or wish they could be the other sex.”

In other words, she says, “their subconscious sex does not match their physical sex.” One of the things this reveals is that gender and sex are not, and trans* people tell us cannot be, completely socially constructed. If it could, in our heteronormative patriarchal culture, there would be no such thing as a trans* person. A profound sense of self, at odds with the body, is the key indicator. This is a powerful example of human life coram meipso.

Serano uses language of “intrinsic inclination” alongside social construction. These inclinations, she says, “are likely to be hardwired into our brains (as they exist on a subconscious level and often remain constant throughout our lives),” though it remains true that “social factors clearly play a strong role in how each individual interprets these inclinations.”  She points out that we rarely can tell the difference between the intrinsic and the social, and that “we only ever notice our inclinations when they are exceptional – when they deviate from both biological and social norms.”  Many of us don’t notice them because we are “cissexual,” people “who are not transsexual and who have only ever experienced [our] subconscious and physical selves as being aligned.”  We, who have experienced our inclinations as more or less matched up with our socially prescribed roles, and our physical bodies, rarely think about them as different or even conflicting things.

Unusual conversation partners, perhaps, Martin Luther, Judith Butler, and Julia Serano.  But I think that understanding and dismantling cissexism is going to take a lot of work and as many resources as we can muster.  How else can we figure out what justice looks like for a trans* woman like Chelsea Manning, convicted, transitioning, and residing decades in a military prison?

I encourage you to head over to the Journal of Lutheran Ethics for the rest of my article, and to read more articles on gender justice by other creative and compelling scholars. 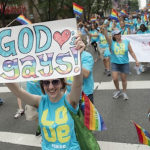 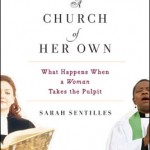 September 20, 2013 Sexism & Churches: A Twitterview with Sarah Sentilles
Recent Comments
0 | Leave a Comment
"They were all too aware of human perversions then and in the age before. Genesis ..."
Bob Shiloh How Gender Studies Transforms Religions
"I have Eve Wood-Langford's book in my personal library. I bought it because I was ..."
Walter Mattfeld The Most Interesting Chapter in the ..."
"You guys aren’t even close to Christians. You believe you’re better than Christ and can ..."
Kyle Racism, Sexism, & The Holiday Classics
"Even as a reverent agnostic, yet assuming a genuine divine revelation, I wonder how that ..."
John Gills How Gender Studies Transforms Religions
Browse Our Archives
Related posts from Caryn Riswold