At the Intersections: The Sacred Feminine, Medieval Style

Many good people live and work at the intersections, and I occasionally invite someone to tell a story from where they stand. Today’s piece comes from Lisa Deam, scholar of art and the history of the middle ages.  I met Lisa when we were both postdoctoral fellows in the Lilly Fellows Program in Humanities and the Arts, engaged in regular and vibrant conversation about vocation, scholarship, teaching, and learning.  These days, Lisa works to make medieval spirituality relevant to life in the twenty-first century through her writing and speaking to church groups, women’s organizations, and communities interested in how to make sense of the intersections in their own lives.

Lisa’s new book, A World Transformed: Exploring the Spirituality of Medieval Maps, is available now, and I asked her to share a bit from it with us here.

When Dan Brown’s novel, The Da Vinci Code, took the world by storm in 2003, I chuckled. It seemed so risqué to imagine Mary Magdalene mothering Jesus’ child. The book amused me not because Brown went too far but because, in his pursuit of the “sacred feminine,” he didn’t go far enough. He didn’t look at the Middle Ages. According to medieval thinkers (and the Bible itself), Jesus didn’t need a spouse to further his bloodline. He himself was seen as a birthing mother. 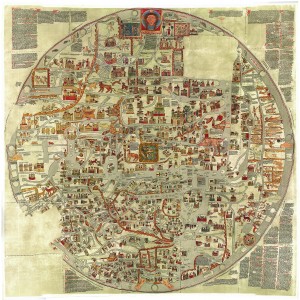 In this excerpt from my recent book, A World Transformed: Exploring the Spirituality of Medieval Maps, I explore the medieval tradition of Jesus as mother via the Ebstorf Map, a world map made ca. 1300.

“Look closely at the map, especially the edge, where Jesus’ head, hands, and feet appear. Jesus does not just hold the world; he embodies it. Round and full, the earth becomes his torso, from which his extremities (somewhat awkwardly) protrude. The map is actually a full-length portrait of our Lord.

The Ebstorf Map gives us a way to understand divine creativity. Jesus’ body contains the world but also swells with the world. To my mind—and I believe this was the intention of its makers—the Ebstorf Map pictures a pregnant body. It is round and swollen. It completely subsumes the normal proportions of the human form. And at the center of this pregnant body lies Jerusalem, which, in Jewish and Christian traditions, was often called the navel of the world.

Of all the names and concepts for Jerusalem that we’ve examined in this book—geographical center, pilgrimage destination, heavenly city—I find “navel” the most evocative. In many geographical texts, “navel” simply means “center.” But of course, it also carries connotations of gestation and birth. It describes wonderfully the place of Christ’s death and resurrection. In Jerusalem, Jesus gave life to the world, much as the umbilical cord carries sustenance to a new human being through the site of the navel. The city of Jerusalem signifies that our earth is forever linked, as if by an unbroken cord, to the one who carried it and brought it forth.

Together with Jesus’ swollen torso, the navel gives us a new and perhaps a challenging image of our Lord. We think of God as our father and Jesus himself as our friend and brother. By picturing Jesus with a pregnant body, one that delivers nourishment through the earth’s navel, the Ebstorf Map presents Jesus as mother—a mother to the world. The map may have been made by the nuns in the Benedictine convent in which it was displayed. Yet its theology does not spring from a “female mind.” In the Middle Ages, men of the church also thought of Jesus as a mother. This arresting tradition, so foreign to the way we address Jesus today, was quite widespread at the time the Ebstorf Map was made.

Male religious leaders frequently sought to imitate the savior’s feminine side. Authority figures such as abbots and prelates saw in Jesus the nurturing and protective qualities they needed in their role as caretakers. As he lay dying, the twelfth-century Cistercian abbot Aelred of Rievaulx told his monks that, “as earnestly as a mother after her sons, I long after you all in the bowels of Jesus Christ.” [1] Yet Jesus’ motherhood consisted of more than a set of admirable qualities; it was also physical. Abbots and monks thought about Jesus’ body and the maternal nourishment it could provide. In his Rule of Life for a Recluse, Aelred of Rievaulx wrote:

On your altar let it be enough for you to have a representation of our Savior hanging on the cross; that will bring before your mind his Passion for you to imitate, his outspread arms will invite you to embrace him, his naked breasts will feed you with the milk of sweetness to console you. [2]

The followers of Christ were to nurse from these breasts and so receive spiritual food.

The Ebstorf Map represents the culmination of the medieval conception of Jesus as mother. In Aelred’s passage above, Jesus lactates. On the map, he does something even more maternal: he gives birth. It is a powerful, if, to modern eyes, sometimes uncomfortable way of thinking about the far-reaching compassion of Jesus. Our savior nurtures us with a body that is neither male nor female; it is both. He gives us every part of himself, including parts we didn’t even know he had!”

Read the rest of this story, including the biblical basis for Jesus as mother, in A World Transformed: Exploring the Spirituality of Medieval Maps (Cascade 2015). 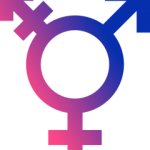 April 24, 2015
How Should People of Faith Respond to {Bruce} Jenner? (#CallMeCaitlyn UPDATE)
Next Post 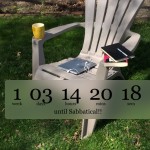 Where the miles are marked in...
slacktivist
Related posts from Caryn Riswold