The Society of Ignatius Press

Several interesting things happen in the last year of the 70’s,

It is named after Saint Ignatius of Loyola, the founder of the Jesuit Order.

Take, Lord, and receive all my liberty, my memory, my understanding, and my entire will, All I have and call my own. You have given all to me. To you, Lord, I return it. Everything is yours; do with it what you will. Give me only your love and your grace, that is enough for me.
Suscipe prayer of Saint Ignatius 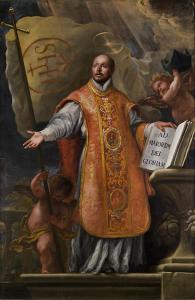 In honor of the feast of St. Ignatius, I thought I would introduce you to the founder of Ignatius press and some of the writers who knew, inspired and were first printed by him.  I quote Fr. Fessio from an interview by the National Catholic Register where he mentions these influential thinkers with something witty and wise that they have written. I hope it gives you some theological food for thought.

Father Joseph Fessio: As a Jesuit, you study philosophy, teach in a high school or university, and then study theology. I went to France for my theology studies and got to know Fr. Henri de Lubac. When it was time to continue my studies, I asked him what I should do my doctoral thesis on, and where I should study. He proposed Hans Urs von Balthasar as “the greatest theologian of our time, and perhaps of all time,” and suggested that I study under a young German theologian, Professor Ratzinger. Looking back, I realize that around the period of the Second Vatican Council — before and after — there were six major theological figures, three German speaking –

The real argument against Christianity is the experience of life, this experience of darkness. And I have always observed that the elemental force and the arbitrary prejudgment which lie behind the technical arguments of the learned — or rather of individual learned men — against Christianity always spring from these ultimate experiences of existence which plunge mind and heart into darkness, fatigue and despair.
― Karl Rahner “Thoughts on the Possibility of Belief Today” (1962), Theological Investigations, Vol. 5 (1966)

“Gregory of Nyssa, in contrast, tries to advance philosophical and theological arguments to prove that the pains of hell cannot be co-eternal with God. His main argument is based on the essential superiority of good over evil; for evil, in its essence, can never be absolute and unlimited. The sinner inevitably reaches a limit when all his evil is done and he cannot go farther, just as the night, after having reached its peak, turns toward the day.  This reasoning corresponds to the example of a physician who allows a boil to mature until it can be lanced. Thus the Incarnation, too, occurred only when evil had reached its climax.19 Gregory’s position has never been condemned.”
― Hans Urs von Balthasar, Dare We Hope That All Men Be Saved?: With a Short Discourse on Hell – 2nd Edition

Ever since the Prologue to the Gospel of John, the concept of logos has been at the very center of our Christian faith in God. Logos signifies reason, meaning, or even “word”—a meaning, therefore, that is Word, that is relationship, that is creative. The God who is logos guarantees the intelligibility of the world, the intelligibility of our existence, the aptitude of reason to know God [die Gottgemässheit der Vernunft] and the reasonableness of God [die Vernunftgemässheit Gottes], even though his understanding infinitely surpasses ours and to us may so often appear to be darkness.
Joseph Ratzinger Introduction To Christianity (2010) Ignatius Press

— and three French-speaking ones —

MORE than one man has noted that the most tradition-minded centuries did the least talking about Tradition. Rather, they lived it. They were soaked through with it. It was through the eyes of Tradition that they read the Scriptures themselves. Then, men were not in the habit of questioning themselves about Tradition, for to them it was the present rather than the past and less an object of study than the very form of their thinking.
Henri de Lubac, The Splendor of the Church (1999) Ignatius Press

It is true that the Christian liturgy, and the Eucharist especially, is one of the most original creations of Christianity. But however original it is, it is still not a sort of ex nihilo creation. The materials from which the Christian eucharist was formed are something quite different from mere prime matter. They are stones that have already been polished and skillfully worked. And they do not come from some demolition yard where they would have then been refashioned without concern for their original form.
Louis Bouyer, Eucharist (1989) University of Notre Dame Press

For the pagans “divinity” was rather a convenient manner of explaining the things of this world. It enveloped the nymphs and dryads and the ambrosially busy characters on Mount Olympus. For them the “theologians” were the poets of the past like Orpheus, Homer, and Hesiod, who had drawn up detailed theogonies; in fact, any prose writer who speculated on the origin of the world was a “theologian.”
Yves Congar A History of Theology (2019) ATF Press

It was a blessing for me to know four of them well.

When I returned to the United States in 1974, I was a part of a reading group that discussed these theologians, along with

… One morning, when it was barely light, I woke up because of a golden light that filled the whole wall above my bed, and I saw something like a picture of the Holy Virgin, surrounded by several other personages … and several angels, some of whom were as big as she, while others were like little children. It was like a tableau, and yet the Holy Virgin was alive, in heaven, and the angels were changing position. I believe this lasted for a very long time. I looked, as if praying without words, and I was struck with amazement; I had never seen anything so beautiful. At the beginning, all of the light was like very vibrant gold; it faded little by little, and, as it faded, the face and the hands of the Holy Virgin became more alive and clearer. I was not frightened in the least but filled with a new joy that was both intense and very sweet.
Adrienne von Speyr My Early Years (1968) The vision of Mary, p. 166

a mystic and directee of Fr. Von Balthasar. Since most of their works were not available in English, it was clear that something needed to be done to make their writings available to the English-speaking world. At that time I came to know

“A Mystery in short is an invitation to the mind. For it means that there is an inexhaustible well of Truth from which the mind may drink and drink again in the certainty that the well will never run dry, that there will always be water for the mind’s thirst.”
― Frank Sheed, Theology and Sanity

who was the dean of Catholic publishing in the twentieth century, with his publishing company Sheed and Ward. I asked him whether we should consider establishing our own publishing company, and he said, “By all means. But be ready for ten years of grief.”
Justin McClain,  Ignatius Press at 40 Years: An Interview with Fr. Joseph Fessio August 17, 2018

And i would be amiss if I didn’t introduce you to a few more interesting figures described in the book Ressourcement after Vatican II: Essays in Honor of Joseph Fessio, S.J , along with some of the ones mentioned above. 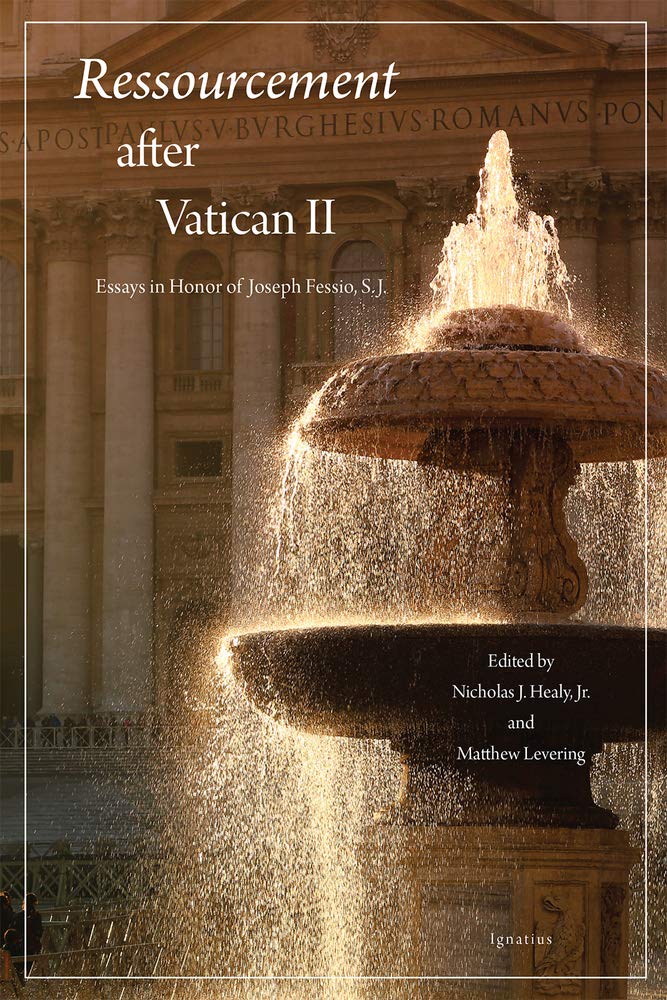 So many young Catholics and converts have gained access to the breadth and depth of the Catholic tradition by reading the books of Ignatius Press. For the authors translated and published by Father Fessio and Ignatius Press—de Lubac, Ratzinger, von Balthasar,

“It is at the name of Jesus, the Christ made man, that every knee is to bend in heaven. The overwhelming revelation made to the angels in the mystery of the Ascension is not that they are to adore the Eternal Word — that is already the object of their liturgy; but rather, they are to adore the Word Incarnate — and that overturns all of heaven, just as the Incarnation revolutionized all the earth.”
― Jean Daniélou, The Angels and Their Mission

von Speyr, Bouyer, and many others—the deepest source of theology is the Word of God interpreted within the Church. Ignatius Press has devoted itself to awakening such joy in its readers by giving them the works of Father Fessio’s mentors (de Lubac, Ratzinger, von Balthasar, Bouyer) as well as books by

Lead, Kindly Light, amid the encircling gloom,
Lead Thou me on!
The night is dark, and I am far from home—
Lead Thou me on!
Keep Thou my feet: I do not ask to see
The distant scene,—one step enough for me.
Saint John Henry Cardinal Newman The Pillar of the Cloud, st. 1 (1833).

We are meant to feel that Death was the bride of Christ as Poverty was the bride of St. Francis. We are meant to feel that his life was in that sense a sort of love-affair with death, a romance of the pursuit of the ultimate sacrifice. From the moment when the star goes up like a birthday rocket to the moment when the sun is extinguished like a funeral torch, the whole story moves on wings with the speed and direction of a drama, ending in an act beyond words.
G.K. ChestertonThe Everlasting Man(1925)

“Wonder does not make one industrious, for to feel astonished is to be disturbed.”
— Josef Pieper (Leisure: The Basis of Culture)

and so many others.
Matthew Levering, Ressourcement after Vatican II: Essays in Honor of Joseph Fessio, S.J (2019) Ignatius Press

And I leave you with one last nugget before you move onto other things to read.

“Try to keep your soul always in peace and quiet, always ready for whatever our Lord may wish to work in you. It is certainly a higher virtue of the soul, and a greater grace, to be able to enjoy the Lord in different times and different places than in only one.”–St. Ignatius Loyola 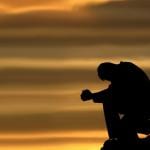 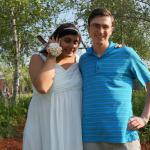 August 1, 2020 Gaining Faith in College
Recent Comments
1 Comment | Leave a Comment
Browse Our Archives
get the latest from
Catholic Bard
Sign up for our newsletter
POPULAR AT PATHEOS Catholic
1

More Important than Belief in the...
Messy Inspirations
Books by This Author Books by Catholic Bard 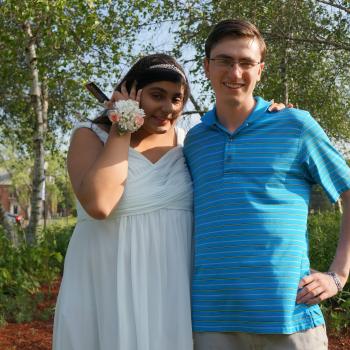 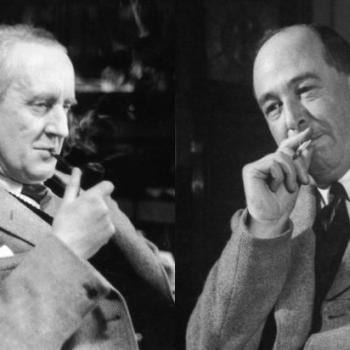 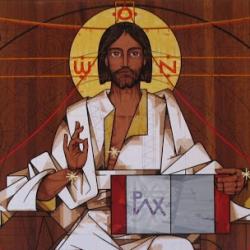 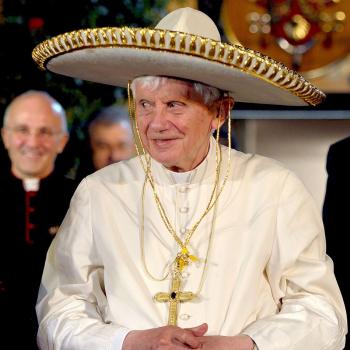 How White Men Lost the Meaning of Redemption...
by guest writer Sean O’Conaill   Part I – Redemption as Freedom   ...
view all Catholic blogs
What Are Your Thoughts?leave a comment

One response to “The Society of Ignatius Press”