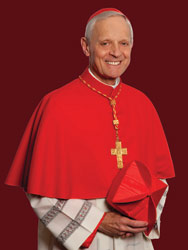 PETE: Who was your target audience for your book The Light is On for You?

CARDINAL WUERL: My target audience is Catholics. That’s a broad swath of humanity, I know, but we all need Confession, and we all could stand to grow in our practice of the sacrament. That will be true, moreover, until the day we die. Confession is something we will never outgrow, even if we become the saints God made us to be. Pope John Paul II and Mother Teresa of Calcutta were revered even during their lifetime; but both made frequent use of the Sacrament of Reconciliation.

In this book, as in most of my writings, I tried to focus on our great faith heritage — the things we share in common. I talk about the history, biblical roots, the experiences of the saints, and of course the doctrine and Church law. The things of Catholic life are never boring because we have such a rich tradition and so many stories to tell. Talking about Confession, I was able to draw from the lives of so many Catholics — people who have benefited from the sacrament and were happy to say so – to provide some very good examples.

PETE: What is your greatest hope for this book?

CARDINAL WUERL: Some readers might be afraid of the confessional. I hope this book can help them get over their fear and into the sacrament. Other readers perhaps would benefit if they went to Confession more often. Still others already go regularly, but want to get more out of the experience. I hope this book can help all of them, because it reviews the basic principles, gives the advice of the saints, and shares stories that provide good models.

Confession has been my habitual homecoming since I was a child. It is a consolation and a joy, and such joy, our faith teaches us, is meant for everyone. It is our vocation to bring it to as many people as possible.

PETE: Pope Francis has spoken more than a few times about confession even stating that he partakes of the sacrament every two weeks. How do you think his influence may affect the current trends in the use of the confessional?

CARDINAL WUERL: It would be great to see a “Francis Effect” in the confessional lines. You’re right to say that the Holy Father takes every opportunity to urge Catholics to make good use of the sacrament. He admits that he goes often himself. It was edifying to see the photographs of him making his Confession this Lent. He’s setting an example for all of us to follow.

When it comes to the Francis Effect, sometimes people’s imitation lags a little behind their admiration. This pope is calling us to be better people and to do great things, but he’s not asking anyone to do something he’s not doing himself. We need not just to hear him, but to heed him. Making a good Confession is one way to do that.

PETE: It is evident that the confessional lines are minimal at best in many parishes. How do you think we arrived at this sad reality?

CARDINAL WUERL: When I was a young priest, in the 1960s and 1970s, there was much experimentation and confusion in the Church. Teachers and clergy were encouraged to communicate an experience of God’s love, but to do it without reference to the Creed, the sacraments, or the tradition.

It didn’t work very well. Catholics grew up with the impression that their heritage was little more than warm, vaguely positive feelings about God. One of the casualties of that period was the sense of sin. Sin is an unavoidably negative reality, and it’s a universal problem, so it can make everyone uncomfortable. The traditional notion of sin did not suit the tenor of the times, and so the topic was ignored. Confession fell into disuse.

Unfortunately, sin did not. But now many people found themselves without the access to God’s mercy, which the sacrament provides.

Those years of experimentation left so many Catholics weak, spiritually and intellectually, and unable to withstand the tsunami of secularism that came in the last decades of the century. We lost many people because we had failed to teach them about right and wrong, about the common good, about the nature of the family and the objective moral order.

Now, I believe, our task is clear. We need to rebuild our faith from the foundations — with the most basic teachings. I have considered that work essential to my vocation since I was a young priest. It’s at the root of our program to promote Confession in the Archdiocese of Washington. We instituted it several years ago and called it “The Light Is on for You.” It was very successful and has been adopted by many other dioceses nationwide.

I consider this book to be part of the same project — restoring something fundamental to Catholic life. The fact that Confession has been lost to so many is an injustice and a disservice. But it does us no good to wring our hands over it or give in to sadness. We need to “leave the light on” for penitents and welcome them home.

PETE: For those who have not been to confession in a very long time what words of encouragement can you give them?

CARDINAL WUERL: Don’t be afraid. Everyone is rooting for you. None of your sins will shock the priest who hears your Confession. He’s heard everything in his years in the confessional. He knows that everybody sins. He wants you to succeed, and he’ll help you.

You’ll be less afraid if you prepare prayerfully, and I hope this book will assist in that task. Please read it and put it to good use. And if you have questions, don’t be afraid to ask your pastor — or the pastor of the parish across town, if that makes you feel more comfortable!

The experience of mercy is an incomparable feeling. Don’t deny yourself this genuine, though sometimes difficult, pleasure of the spiritual life.

Read Chapter 20 of St. John’s Gospel, beginning with verse 19. Jesus Christ established Confession not because he needed it, but because we do — and because he wanted to give us peace with the forgiveness of sins.

In fact, our Savior bears the name Jesus because he saves us from our sins (see Matthew 1:21). Confession is the ordinary way he established for forgiveness to happen.

CARDINAL WUERL: There is always a stack of books – a backlog in fact – of books that I hope to get to soon. However, in Lent I often go back and reread parts of books that I find particularly helpful. I want to cite several of them: The Passion of the Lamb by Father Thomas Acklin, O.S.B and The Mass of the Early Christians by Mike Aquilina. With that I have as well his book Faith of our Fathers.

A number of years ago, I was part of a group of bishops who made together our annual retreat. Father Thomas Acklin, O.S.B. was our retreat master and based his reflections in large part on his book The Passion of the Lamb: God’s Love Poured Out in Jesus. This Lent I am reading parts of that book all over again.

Mike Aquilina has a way of writing about the Fathers of the Church and the saints as if he just finished a telephone call or received a text message from one of them. In his earlier book The Mass of the Early Christians, there are beautiful reflections on the appreciation of the Eucharistic liturgy by leading figures of the early Church. In his later book published more recently, Faith of Our Fathers, I find another source of reflection in this Lenten season.

While we are on the subject of rereading, never far from my stack of current texts for reflection is of course the apostolic exhortation The Joy of the Gospel by Pope Francis. It is like a magnificent stained glass window. Every time you look at it you find another striking piece, all part of the whole, but worth particular attention.

Click here to read my review of Cardinal Wuerl’s book The Light Is On For You: The Life-Changing Power of Confession

Other titles by this author:
Seek First the Kingdom: Challenging the Culture by Living Our Faith

The Gift of St. John Paul II: A Celebration of His Enduring Legacy

April 10, 2014
Weekly Giveaway - The Light Is On For You: The Life-Changing Power of Confession
Next Post