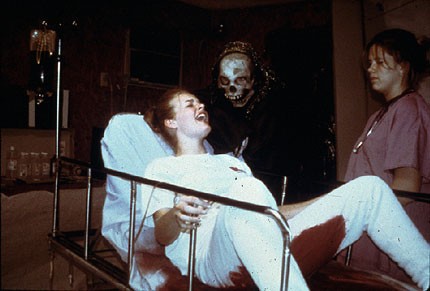 George Ratliff’s  “Hell House,” (2002) resonates with me in a way few documentaries have. Its depiction of evangelicalism is strikingly familiar. When its church members speak about sin, salvation, and Hell, I hear phrases that could have come from my own lips 20 years ago. As I’ve returned to the film over 10 years, my relationship to it has changed. At first, I was sympathetic to the members of Trinity Church, located in Cedar Hill, Texas. Years later, I was frustrated. Now, I find their tactics problematic and dangerous.

The film is a fly-on-the-wall look at the creation of Trinity’s annual Hell House, a haunted house designed to literally scare the hell out of people. There are no vampires, zombies, ax murderers or goblins. Instead, there are gory, realistic depictions of suicide, school shootings, domestic abuse, drunk driving, and abortion. Hell Houses exist throughout the country, but Trinity’s is the most famous — about 15,000 people annually spend $12 to see this real-life horror.

The idea is one of American Christianity’s more visceral — and controversial — evangelism tactics. The hope is that visitors will be so shocked and convicted of their sins that they’ll run sobbing into the prayer room at the end, ready to say the Sinner’s Prayer. It’s the Christian version of Scaring Straight. Several times throughout the film, participants talk about how fear is a part of salvation, and that they’re okay with the media thinking they just want to cause controversy — as long as people are getting saved, they’re doing the Lord’s Work.

Ratliff’s film never mocks their sincerity. “Hell House” is not a “Jesus Camp”-style expose. It focuses on the believers at the center of Hell House and gives them their say; out of the film’s 85 minutes, only about five are given to non-believers’ complaints. The film opens with Trinity Pastor Tim Ferguson talking about the important work he believes the church is doing — he says that not telling others about Christ will send them to Hell, putting the blood on his hands (we’ll get back to that). There’s no tricky editing to show the members as hypocrites. The people profiled are not targets for lampoon. Their beliefs are real and treated without scorn.

So your take on whether Trinity’s Hell House is a good or bad thing is likely based on whether you believe in their brand of Christianity.

Though I grew up in a different denomination than the Pentecostal one Trinity subscribes to, the churches I attended in my youth were similarly focused on the Sinner’s Prayer and scare tactics. If my church had done a Hell House, I imagine I would have been eager to get involved. When I first saw the film, I was still at a point in my spiritual journey where I sympathized with the Trinity members. After all, if we believe Hell is the real final destination for those who don’t put their faith in Christ, then shouldn’t we take all necessary tactics to tell them how to escape that fate? And even if that approach is abrasive, can we really argue with the results (thousands of visitors are said to convert)? 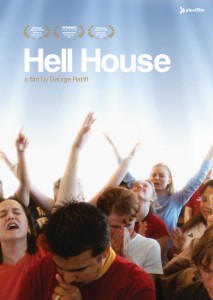 Years on, I don’t know that my faith has changed much. I still hold to orthodox Christian beliefs. I’m probably best described as Reformed in my theology. But revisiting “Hell House,” I find myself troubled at the lack of nuance, compassion and understanding toward those who don’t share Trinity members’ beliefs and dismayed over a theology that smugly celebrates judgment over grace.

There’s a tone-deafness that pervades the Trinity members’ approach to modern culture. We see it early when they’re discussing whether to include same-sex relationships in Hell House. There’s a bit of a chuckle when one person says they need to deal with it because “We get at least one lesbian couple at Steak N’ Ale every night.” A visual goof involving a Pentagram in the “Occult Scene” (which starts — as most occult problems do, I’m sure — with reading Harry Potter and Goosebumps) gives a good sense of how much insight they’re lacking about the culture they’re trying to engage.But that tone-deafness often turns into callousness. There’s a chilling scene where Hell House visitors enter a hospital room and hears a demon crying out in a mocking voice, “Paul thought his homosexual lifestyle was everything a man could want. But, oh no, now he’s dying of AIDS.” The scene takes place next to one where a teenage girl — with blood smeared all over her crotch — dies because of a botched abortion. The girl makes a last-minute call to God and ascends to Heaven. Paul, who curses God for not approving of his homosexuality, goes to Hell. In probably the most blatantly offensive Hell House scene, date rape leads to suicide — the implication that attending a rave leads to rape and suicide, without ever acknowledging the victim, is deeply troubling.

Trinity holds to a black-and-white view of sin and humanity. While I’d agree there are some things — murder, adultery, abuse — that are point-blank wrong, this conversation normally requires more nuance and love than a haunted house, by design, can provide. That’s to say nothing of Hell House’s smug view on judgement — someone’s gay? They get AIDS. They drink? They’re killed in a car crash. There’s no room for grace, redemption or sanctification except for the demand of an on-the-spot conversion. This heavy-handed approach is very problematic.

Shock-and-awe evangelism is contrary to the gospel. Christ dealt with sin not through terror but by inviting people into dialogue, showing what they were lacking and pointing them toward hope. The most effective evangelism I’ve seen comes not from hard confrontation but from relationships that display joy and hope. The problem? Those relationships call us out of our comfort zones, take time and come with no guarantees. It takes control out of our hands and leaves it in God’s.

Go back to that opening statement were Pastor Ferguson talks about sinners’ blood being on his hands. Who is Hell House for? Is it to showcase God’s glory — which is not done with fear and judgment but with worship, joy and praise? Is it to point others to Christ — which would involve compassion, humility and relationship? Or is for the Trinity members — to convince them they’re doing all they can, that they’re on the winning team, and to Hell (literally) with anyone who disagrees with them? It turns relationship-based faith into a numbers game. Instead of welcoming conversation, it forces an emotional response — which it often gets. But is that enough?

I remember a pastor once recalling how he interned for a revival conference his church was holding. They brought in a dynamic speaker and, at the end of the week, thousands of people went forward. A month later, he was responsible for calling everyone who had seemingly converted. Of the thousands who professed decisions, only a handful still went to church. When you force people to respond only emotionally to the deepest issues of the soul, you’re planting a seed in shallow soil. I’d be very surprised to find many Christians who converted at a Hell House and remained faithful.

But the film never treats the Trinity members as jokes, hypocrites or bigots. Ratliff spends time with several members to see their life outside the church. The film spends time with a single father of three. He takes us through the process of getting the family ready in the morning and then, in the middle of it, his toddler has a seizure. The family calls 911 and the father prays for the boy. By the time the paramedics arrive, he’s fine. Did the prayer heal him, or did the boy get better? The film doesn’t speculate, only observes. Later, when the man’s daughter begins dating, Ratliff allows her to talk about her love life. She expresses the traditional Christian views of abstinence, but the film never pokes fun; Ratliff gives her time to explain how her relationships work and that it’s not necessarily as tightly wound as it seems. It’s a fair portrayal. 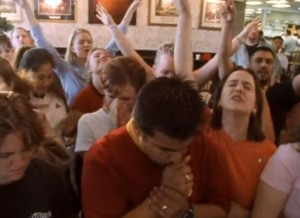 And it’s fascinating to watch the teens and adults approach their Hell House roles. Some have truly found catharsis in it, such as a woman whose work in the suicide scene once brought her face-to-face with her rapist and opened the door to forgiveness. One church member describes the dissolution of his own marriage and sees similar scenes enacted in the event — he ends up making his own trip to the Prayer Room. There’s the sense that maybe Hell House does some good, even if only for the people involved.

But there are also problematic elements as you watch the teens audition for the “suicide scene,” “abortion girl,” and other Hell House staples. They approach their roles like it’s high drama — the church even has an Oscar ceremony to award the best “performances” at the end of the season. But do they realize they’re taking real-world tragedy and turning it into a bludgeoning evangelical tool? Do they think about the victims they’re portraying — the person who’s been date raped, who’s wrestled with suicide, who is questioning their sexuality — who may have flashbacks or be disturbed by this? And what does it say about compassion and Christianity that they can take the very real, complex dilemma of faith, salvation and issues of the soul and turn it into a one-dimensional horror show? And why are they so attracted to playing these tragic roles — do they feel compassion and need? Or is it their opportunity to tip-toe as close to these forbidden actions as possible?

“Hell House” works because it doesn’t thrust these questions on the viewer. It doesn’t announce an agenda. It observes and naturally brings questions to the surface. People with no background in evangelicalism may find it hilariously corny and misguided. People involved in churches like Trinity may find this to be a validation of their beliefs. But I belief most people will walk away with some skepticism, wondering what good the members think they’re doing.

I’ve talked before about my dislike for evangelical films. I don’t think art should bludgeon with messages. I don’t think you should preach to the choir. The thing that continues to fascinate me about “Hell House” is how it holds a mirror up to my own beliefs and asks me to consider my own thoughts about how faith and culture should engage each other. It’s a fascinating movie; it becomes more so each time I watch it.

Note: This post previously appeared on my old blog, but has been edited and rewritten in place.

October 14, 2016
5 pieces of pop culture to help you endure the election
Next Post 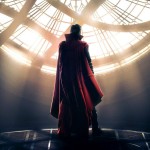