The Book of Esther is different from all other books in the Old Testament. What is different about it? What does it have that we might learn from today?

“there was a Jew in Susa the citadel whose name was Mordecai, the son of Jair, son of Shimei, son of Kish, a Benjaminite, who had been carried away from Jerusalem among the captives carried away with Jeconiah king of Judah, whom Nebuchadnezzar king of Babylon had carried away. He was bringing up Hadassah, that is Esther, the daughter of his uncle, for she had neither father nor mother.”

So we see that Esther was orphaned and God is always endeared to orphans because they have no parents and apparently Esther had lived in captivity when Babylon invaded Israel years before. When King Ahasuerus asked his wife, the Queen Vashti to come to him she refused and so he deposed her and began looking for a new queen and upon seeing Esther who was “a beautiful figure and was lovely to look at” he had no need to look further (Esther 2:7b). This “young woman pleased him and won his favor” (Esther 2:9) so “when the young woman went in to the king in this way, she was given whatever she desired to take with her” (Esther 2:13) and “Esther was winning favor in the eyes of all who saw her” (Esther 2:15). “The king loved Esther more than all the women, and she won grace and favor in his sight more than all the virgins, so that he set the royal crown on her head and made her queen instead of Vashti” (Esther 2:17) and just like that, a poverty stricken orphan who had lost both parents rose to become queen under “King Ahasuerus who reigned from India to Ethiopia over 127 provinces [and] sat on his royal throne in Susa, the citadel” (Esther 1:1).

As so often occurs, “He who digs a pit will fall into it” (Eccl 10:8a) and that is what is going to happen to Haman who hated the Jews and convinced the king to have them exterminated. To begin with, Esther was not a committed Jew like Mordecai was. For example she had been violating all of the dietary laws and she willingly married a pagan king, so she is not quite the heroine that people might believe at first. Of course that will change when her identity as a Jew and her people are threatened. Christians should learn from her example that she is going to be put in a very precarious situation because of her disobedience but as we will later read, God can use evil for good as He did with Joseph’s situation (Gen 50:20).

When Mordecai saw that the evil plan that Haman had planned had the potential of having all the Jews killed, he told Esther

“Do not think to yourself that in the king’s palace you will escape any more than all the other Jews. For if you keep silent at this time, relief and deliverance will rise for the Jews from another place, but you and your father’s house will perish. And who knows whether you have not come to the kingdom for such a time as this?” Then Esther told them to reply to Mordecai, “Go, gather all the Jews to be found in Susa, and hold a fast on my behalf, and do not eat or drink for three days, night or day. I and my young women will also fast as you do. Then I will go to the king, though it is against the law, and if I perish, I perish.” Mordecai then went away and did everything as Esther had ordered him (Esther 4:13-17).

At first, with Queen Esther unwilling to come to the aid of Mordecai and the Jews, Mordecai reminded Esther that she too was a Jew and this would eventually come to the knowledge of the king and that she and her entire family would also perish with her. Mordecai wisely pointed out the divine placement of her as queen so that God had placed her in this place and at this time just for the express purpose of rescuing her people so Queen Esther asked all the Jews to fast for her as she was going to try and enter the king’s presence and if the king didn’t raise the scepter, she would surely be put to death. Fortunately, God had given her grace in the eyes of the king (Esther 5:2). God has placed you where you are in life and it may well be for the very reason of glorifying God and that God’s timing is a time for you to act with courage for doing what you know to be right. 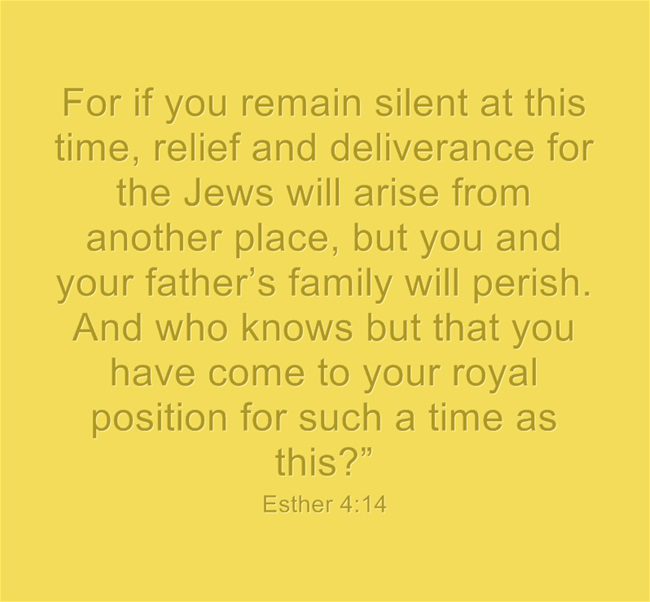 The moment of truth was here. Esther entered the king’s court and

“when the king saw Queen Esther standing in the court, she won favor in his sight, and he held out to Esther the golden scepter that was in his hand. Then Esther approached and touched the tip of the scepter. And the king said to her, “What is it, Queen Esther? What is your request? It shall be given you, even to the half of my kingdom.” And Esther said, “If it please the king, let the king and Haman come today to a feast that I have prepared for the king” (Esther 5:2-4).

When Haman found out that he thought that he was to be the guest of honor at the feast he was absolutely thrilled, thinking that he would be richly rewarded but “when Haman saw Mordecai in the king’s gate, that he neither rose nor trembled before him, he was filled with wrath against Mordecai. Nevertheless, Haman restrained himself and went home, and he sent and brought his friends and his wife Zeresh. And Haman recounted to them the splendor of his riches, the number of his sons, all the promotions with which the king had honored him, and how he had advanced him above the officials and the servants of the king. Then Haman said, “Even Queen Esther let no one but me come with the king to the feast she prepared. And tomorrow also I am invited by her together with the king. Yet all this is worth nothing to me, so long as I see Mordecai the Jew sitting at the king’s gate.” Then his wife Zeresh and all his friends said to him, “Let a gallows fifty cubits high be made, and in the morning tell the king to have Mordecai hanged upon it. Then go joyfully with the king to the feast.” This idea pleased Haman, and he had the gallows made” (Esther 5:9-14). There is a time to listen to your friends but godly counsel almost always guarantees good choices and good consequences. Haman would have neither.

Finally, the feast arrived and at “the feast, the king again said to Esther, “What is your wish, Queen Esther? It shall be granted you. And what is your request? Even to the half of my kingdom, it shall be fulfilled” (Esther 7:2) and she answered “I and my people [are] to be destroyed, to be killed, and to be annihilated. If we had been sold merely as slaves, men and women, I would have been silent, for our affliction is not to be compared with the loss to the king.” Then King Ahasuerus said to Queen Esther, “Who is he, and where is he, who has dared to do this?” And Esther said, “A foe and enemy! This wicked Haman!” Then Haman was terrified before the king and the queen” (Esther 7:4-6). The king was furious “the king arose in his wrath from the wine-drinking and went into the palace garden, but Haman stayed to beg for his life from Queen Esther, for he saw that harm was determined against him by the king. And the king returned from the palace garden to the place where they were drinking wine, as Haman was falling on the couch where Esther was. And the king said, “Will he even assault the queen in my presence, in my own house?” As the word left the mouth of the king, they covered Haman’s face. Then Harbona, one of the eunuchs in attendance on the king, said, “Moreover, the gallows[b] that Haman has prepared for Mordecai, whose word saved the king, is standing at Haman’s house, fifty cubits[c] high.” And the king said, “Hang him on that.” So they hanged Haman on the gallows that he had prepared for Mordecai. Then the wrath of the king abated” (Esther 7:7-10). The courage of Esther, who had risked her life to enter the king’s court shows that courage is often rewarded when it is done for righteousness’ sake.

How ironic that the gallows that Haman had planned to hang Mordecai on became his own instrument of execution and the plan where he tried to have all the Jews killed resulted in his own death. This is how divine providence works. If we leave vengeance to God we are leaving it in capable hands. We should never get between the hammer and the work. To take vengeance out ourselves is only going to backfire on us. We must trust God for He has told us to “never avenge yourselves, but leave it to the wrath of God, for it is written, “Vengeance is mine, I will repay, says the Lord” (Rom 12:9). This shows that we trust God to make all things right…maybe not today or maybe not even next year but he will settle all things because “each of us will give an account of himself to God” (Rom 14:12) and this includes unbelievers (Rev 20:11-15). If you have not repented and trusted in Christ, why should God allow you into His heaven? Why shouldn’t He end you directly to hell? If you don’t have the righteousness of Christ imputed toward your account (2 Cor 5:21) you will not enter the Kingdom of Heaven for “Whoever believes in the Son has eternal life; whoever does not obey the Son shall not see life, but the wrath of God remains on him” (John 3:36).

April 20, 2014
Jonah and the Whale Bible Story: Lesson, Summary and Study
Next Post

April 20, 2014 Bible Verses About Teachers: 7 Scriptures With Commentary
Recent Comments
0 | Leave a Comment
Browse Our Archives
get the latest from
Evangelical
Sign up for our newsletter
POPULAR AT PATHEOS Evangelical
1 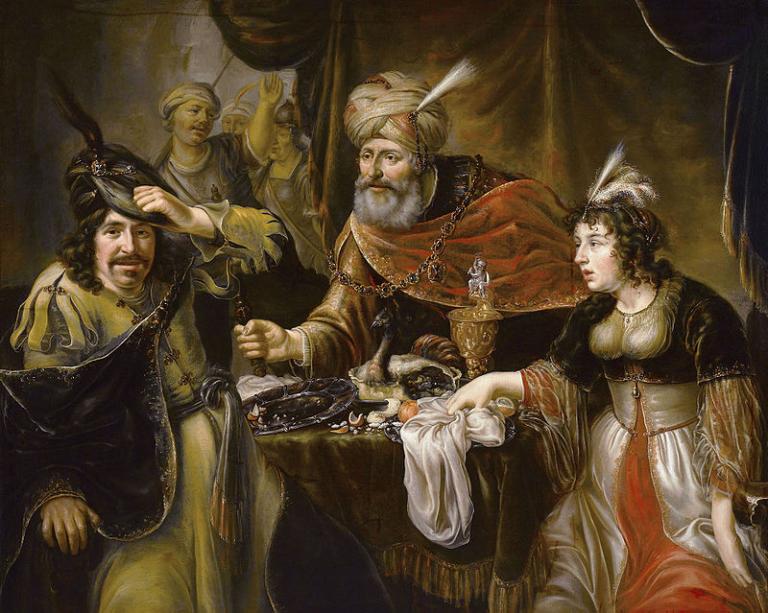