Martin Luther: God Plus One: The Majority of One

Martin Luther: God Plus One: The Majority of One August 5, 2014 Jack Wellman

How could one man stand against Rome and the power that the Catholic Church held?  Here is the courageous story of one man against the church at Rome.

Martin Luther was by no means perfect.  He had anti-Semitic tendencies but he was certainly a courageous man and he often stood alone against the iron hand of Rome.  For one thing, he had such certainty in the Word of God, the Bible. This brave man held his ground at a time when those who questioned or challenged the church often faced martyrdom. We need this same kind of Christian today when the faith is challenged. You can be that kind of Christian when the time comes.

Persecutions and attacks against believer’s faith have never been as great as they are today. You may be asked to give a reason for the hope that is within you but you don’t need to be expert in apologetics to give a reasonable explanation for your belief in God. The greatest witness for a Christian can be the fact that you are swimming upstream against a culture that is headed down the waterfall of judgment. When Martin Luther had to defend his beliefs that the Word of God, not tradition, was the mainstay of his faith he put his own life at risk. Pope Leo X had allotted Luther only one day to recant his “rebellion” after he was held on trial. 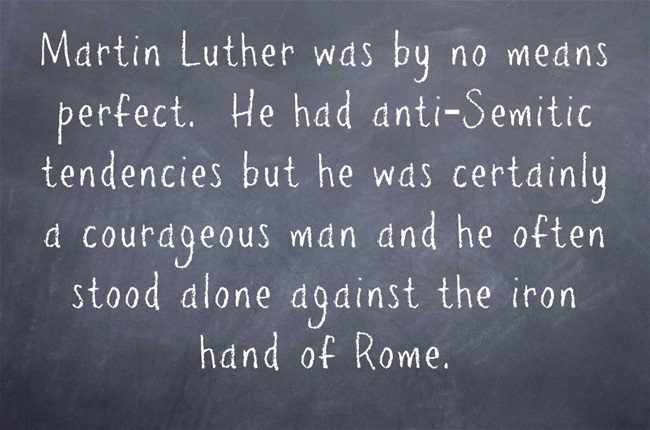 The Diet of Worms

At Luther’s trial at the Diet of Worms on April 17th, 1521, he was asked two questions:

“Are these your books?” and “Will you recant them?” The books that they spoke of were his writings that insisted that the Word of God was the final authority and not the traditions of the Papacy. If Luther had simply said, “I recant” he would have been a free man but his response changed history and the direction of the church and actually fueled the Great Reformation. Luther said, “Unless I am refuted and convicted by testimonies of the Scriptures or by clear arguments (since I believe neither the Pope nor the Councils alone; it being evident that they have often erred and contradicted themselves), I am conquered by the Holy Scriptures quoted by me, and my conscience is bound in the word of God: I cannot and will not recant anything, since it is unsafe and dangerous to do anything against the conscience.” The Moderator, Johann von Eck was furious with this response. Eck vehemently said that the councils could not err, to which Luther retorted, “Here I stand! I cannot do otherwise. God help me! Amen.” With this statement, Luther thought that he had apparently sealed his own death. Luther did manage to escape thanks to his protector, Frederick the Wise of Saxony, who had him snatched by soldiers and delivered to Wartburg castle, near Eisenach, but Luther did not know this at the time that he was testifying in his own defense.

The Power of God’s Word

When I prepare messages for the church I stand on the Word of God for the main thrust of the message, for in it, there can be no doubt; there is the real power of God.  Paul said as much when he wrote “I am not ashamed of the gospel, because it is the power of God that brings salvation to everyone who believes: first to the Jew, then to the Gentile. For in the gospel the righteousness of God is revealed—a righteousness that is by faith from first to last, just as it is written: “The righteous will live by faith” (Rom 1:16-17).  The God of the Universe testifies of His own Word, saying “my word be that goes forth out of my mouth: it shall not return unto me void, but it shall accomplish that which I please, and it shall prosper in the thing whereto I sent it” (Isaiah 55:11).  Think long and hard on that sentence….God will cause His Word to prosper in the thing, the purpose, to where He sends it.  God has the power to bring about what will come to pass when His Word is used.   I have no such power but God’s Word does so why not rely on it and trust the God Who said His Word will not return without accomplishing what He wills it to do? If I am only to rely upon human opinion, then like Oprah or Dr. “Phil”-good, I will have nothing to even hang a hat on because “All Scripture is given by God” (2 Tim 3:16) and is not of human origin (2 Pet 1:20).  The Word of God is “living and powerful, and sharper than any two-edged sword” (Heb 4:12).  God’s words “are spirit, and they are life” (John 6:63) and we must live by them, day by day (Matt 4:4). Every human word is subject to error but “every word of God is pure” (Prov 30:5) and believers are sanctified by these words (John 17:17).

I used to be fearful of sharing the Word of God.  What I didn’t understand was that the Word of God has the real power to save…I have no such words.  My words can be proven wrong and are untrustworthy, but the Word of God is without error.  If you rely upon the Word of God, then even if you are the only one speaking the truth, you still have the majority…you plus God.  The fear of man can cause you to stumble but “whoever trusts in the Lord is kept safe” (Prov 29:25). Jesus commands believers “do not be afraid of those who kill the body and after that can do no more. But I will show you whom you should fear: Fear him who, after your body has been killed, has authority to throw you into hell. Yes, I tell you, fear him” (Luke 12:4-5). Jesus has conquered the grave and has declared victory over death (1 Cor 15:57).  That is why the gospel is called the good news but for those who have not ever repented, it is the worst of all possible news (Rev 20:11-15).

If you are a Christian, someday someone will challenge your belief in the Bible or of the existence of God in the hopes that you will recant. Maybe they already have.  May you be able to say those famous words that Martin Luther uttered, “Here I stand! I cannot do otherwise. God help me! Amen.” God plus one is always a majority so “in your hearts set apart Christ as Lord. Always be prepared to give an answer to everyone who asks you to give the reason for the hope that you have. But do this with gentleness and respect” (I Peter 3:15).

August 4, 2014
How to Stop The Gossip In Church
Next Post

August 6, 2014 Are There Carnal Christians?
Recent Comments
0 | Leave a Comment
Browse Our Archives
get the latest from
Evangelical
Sign up for our newsletter
POPULAR AT PATHEOS Evangelical
1

What If Science Caused the Pandemic?,...
Cranach
Related posts from Christian Crier