What Was Rodin Thinking, Man?

The Thinker by Auguste Rodin is thinking about something much different that we might believe. What was Rodin thinking when creating the so-called “Thinking man?”

Auguste Rodin’s “Thinking Man” is not really a work that was supposed to be about human philosophy but rather Rodin’s Thinking Man is contemplating something…and something that’s not very good. Rodin’s Thinking Man is not thinking, “I think, therefore I am,” but what I am thinking is not good because of what I see. The Thinker is a bronze statue or sculpture showing a life-sized figure sitting on a stone pedestal with his head resting on his fist. Apparently, he’s deep in thought over something he’s seeing, so it’s an image misappropriated to philosophy, because in actuality, The Thinker is thinking about the fate of human souls apart from God. Rodin based his work on The Divine Comedy of Dante, and the “Thinker” was intended to be sitting near the entrance of, while looking directly at, the gates of hell, so the “thinker” was originally intended to represent Dante at the gates of hell, pondering the eternal state of those who are in the lake of fire.

Conceived in 1880 to be the crowning element for Dante’s, The Gates of Hell, the Thinker was originally called The Poet and was intended to be Dante himself, leaning forward, and looking down at the various levels of hell, watching tortured bodies squirm in agony. Eventually, The Thinker became an independent work, separate from the Gates of Hell, so what was the Thinker thinking about? Was it human philosophy? Was he thinking, “I can think, so that means I must exist?” No, The Thinker may have been thinking about humanities rejection of God and their ultimate fate. Of course, not all have rejected God, so The Thinker is not thinking about any kind of human philosophy, but rather it’s a man thinking about and viewing all those lost souls in hell, where all hope is abandoned. It’s as if Rodin is The Thinker himself, and he is thinking of all those lost souls in time. It’s almost a “What if” for us, like “What if I had mentioned Christ to grandpa before he died? Would he have been saved? Why was I silent about Christ when so many of my friends and family and co-workers passed into an eternity separated from God, and having no hope for change? Rodin thought of the figure in broader, more universal terms than just thinking. The Thinker is depicted as a man in sober meditation battling with a powerful internal struggle, and resting in a highly unique pose with his hand to his chin, his right elbow on his left knee, and in a crouching position…almost as if he’s straining to see something. This position allows the statue to survey the work with a contemplative feel…and it’s not a good feeling about all those who have died outside of faith in Christ.

The Wrath of God

Jesus told us to “not fear those who kill the body but cannot kill the soul. Rather fear him who can destroy both soul and body in hell” (Matt 10:28), and the author of Hebrews writes that it’s “a fearful thing to fall into the hands of the living God” (Heb 10:31), “Therefore, knowing the fear of the Lord, we persuade others” (2 Cor 5:11a). Jude may have thought about the state of a person’s heart when sharing Christ because he said we should “have mercy on those who doubt; save others by snatching them out of the fire; to others show mercy with fear, hating even the garment stained by the flesh” (Jude 1:22-23). Showing God’s mercy works for those who have doubts or are convicted of their sin, but others may need to hear about God’s wrath before God’s mercy becomes relevant. When God’s Spirit convicts them of their sin, like it did us who believe, it makes them run to Christ for forgiveness and mercy. When they repent and put their trust in Christ, God doesn’t give us a spirit of fear, but a Spirit of power and love (2 Tim 1:7).   This takes all our worries away concerning the wrath of God (John 3:36a). Jude understood that sometimes it takes , “snatching them out of the fire,” by showing them that they have every reason to fear God if they reject Jesus Christ, while at other times, like if they are already broken, they need to be pointed toward God’s mercy in Christ. It still puzzles me why people get so apoplectic about Jesus being the only way  to God but not acknowledging that at least there is “a way” (John 14:6).

The Fear of God

Fear can be a good thing and it can be a bad thing. Irrational fear can subject a person to unnecessary mental torment, where they’re always expecting the worst. Fear can easily become debilitating, making work difficult, if not impossible, and destabilizing family relationships, however, fear can also keep us alive. It was fear that kept us as young boys from falling off of large bluffs in Arkansas where we scaled cliffs that were somewhat dangerous. The fear kept us from taking unnecessary risks and made think about our next step. Fear tightened our grips on the rock, and the fear of falling made sure that we’d find firm footing along the way. The fear of death keeps us from taking risks that could kill us, so not all fear is destructive. It even keeps a few cats, dogs, and squirrels alive around here, but here’s where the fear is really good. The fear of God is the very beginning and consummation of wisdom because the wisest thing we could ever do is trust in Christ. In this way, the fear of God is a good thing because it brings eternal life. The Bible says that the fear of God is the very beginning of wisdom (Prov 1:7, 9:10). Most misunderstand what this fear is. It’s not a fear of being struck down by God or a fear of unending punishment, but more like a driver on a freeway. The driver fears getting a ticket, so guess what happens? He slows down, or at least, drives the speed limit. It’s not that he or she fears police themselves, but they fear the blue lights, because they fear the price that a speeding ticket is going to bring in fines, court costs, insurance rates, so that type of fear is productive and keeps us from harm. Or at least it keeps our insurance rates lower, but fearing God means reverencing God, obeying God, listening to God’s Word, and fearing the consequences when we break God’s law. Believers never have to worry about a fear of being cast into hell, but they should fear (or respect) God taking them behind the woodshed. God disciplines every child He loves (Heb 12:6), and “the LORD reproves him whom he loves, as a father the son in whom he delights” (Prov 3:12).

We have already read what Jesus said to fear…and that is falling into the hands of God for all who have rejected His Son, Jesus Christ. Jesus said whoever rejects Him, has the wrath of God abiding on them (John 3:36b), but Christ followers have no need to fear, “For God has not destined us for wrath, but to obtain salvation through our Lord Jesus Christ” (1 Thess 5:9). Besides, “God gave us a spirit not of fear but of power and love and self-control” (2 Tim 1:7), so perhaps The Thinker, if he could speak, would tell those who have not yet believed, to repent and trust in Christ, and they will be saved (John 3:16-17). Auguste Rodin might not have been thinking this, but have you ever asked yourself, “Why do people reject God and scorn Jesus Christ so much…and why are so many so hateful about God’s wrath when God has provided a way of escape?” Complaining about God’s wrath is like complaining about the huge gash on the Titanic, and while it’s sinking, everyone’s railing at the crew, all the while, ignoring the lifeboats. For humanity, Jesus is the only way of escape, but instead of railing against this as being narrow-minded because there is only one way, we should rejoice that there is at least “a way.” And, even though I believe this, it’s not my opinion because Jesus’ statement about Himself is that He is the one and only way to be saved (John 14:6). You can scorn the Titanic crew for getting them into this mess and go down with the ship, or you can escape to the only way that you can be saved, and just as the Apostle Peter said, “there is salvation in no one else, for there is no other name under heaven given among men by which we must be saved” (Acts 4:12). It might be narrow and the only way, but at least it is a way! A way is better than no way. Believers have no reason to fear God’s wrath because God’s wrath was placed on Jesus Christ for those who trusted in Him. For those who reject Him, they have every real reason to fear.

Evangelical
The Book Of Jonah: The Reluctant Prophet
Christian Crier 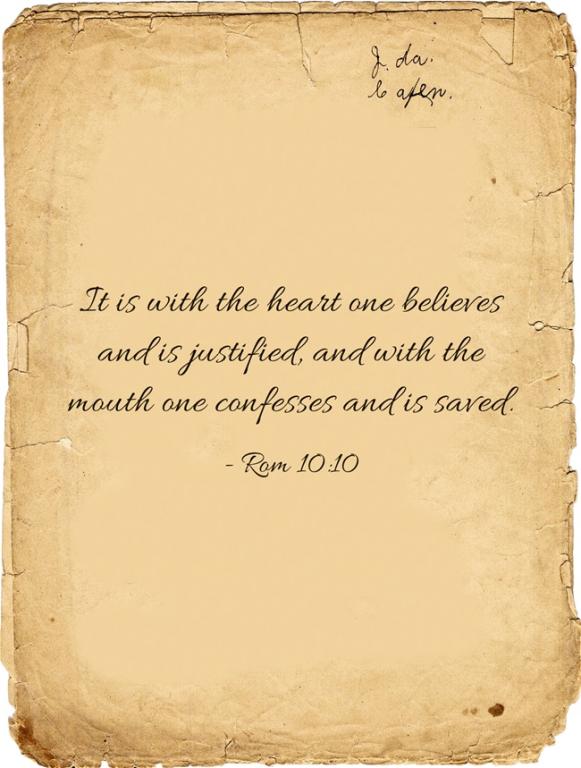