What are some of the top Bible verses about demons?  What ones would you include and tell us why?

The definition of a demon is a malevolent spirit being, an unclean spirit, a fallen angel and comes from the Koine (or common Greek language) “δαιμόνιον” (daimonion).  The ancient Greek word for demon “δαίμων” could come from the Greek verb “daiesthai” which literally means “to disturb” or “divide” and denotes a spirit of supernatural power.  It’s quite interesting that during the beginning of Jesus’ earthly ministry, demons were the first ones to truly recognize that Jesus was more than a Man.He was also God and they feared Him immensely because they knew that He was also their Creator.  Since God exists and the Bible describes demons, then demons must exist.  What are some of the top Bible verses about demons and what can we learn from them?

James 2:19 “You believe that God is one; you do well. Even the demons believe-and shudder!”

We know that demons are powerful spirit beings that fell from grace and followed Lucifer and in their fall from grace became demons and turned to antagonism of anything that had to do with God.  One thing demons do is shudder with fear and trepidation before God because they know their ultimate fate is the lake of fire (Rev 20:11-15) or sometimes referred to as the abyss or the bottomless pit.  The Devil and the demons know the Bible better than we do and even Satan can quote no, misquote Scripture and surely know that his fate is also sealed.  The point James was making was that even the demons believe in God and shudder so just because someone says that they believe in God doesn’t mean that they are saved.that only qualifies them for being a demon.  If a person knows that chairs exist and can see them but never sit and rest in one, their belief in that chair means nothing unless they act upon it. 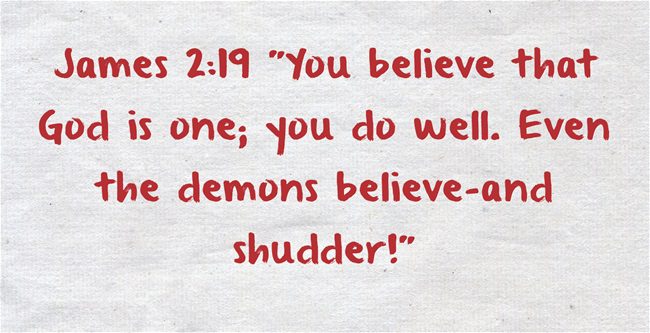 Acts 19:13-16 “Then some of the itinerant Jewish exorcists undertook to invoke the name of the Lord Jesus over those who had evil spirits, saying, “I adjure you by the Jesus whom Paul proclaims.” Seven sons of a Jewish high priest named Sceva were doing this. But the evil spirit answered them, “Jesus I know, and Paul I recognize, but who are you?” And the man in whom was the evil spirit leaped on them, mastered all of them and overpowered them, so that they fled out of that house naked and wounded.”

So, you say you want to get into exorcisms of demons?  Careful.  These are nothing to mess with.  Who are we to mess with spiritual powers?  Even so, I know of many people who say that they cast out demons but no one is ever taught to do this or told to do this anywhere in the Bible by the apostles or pastors.  I am not saying that exorcisms still don’t’ happen but it’s a little like playing with lightning.very dangerous indeed.  The fact is that even “when the archangel Michael, contending with the devil, was disputing about the body of Moses, he did not presume to pronounce a blasphemous judgment, but said, “The Lord rebuke you” (Jude 1:9) while Peter warns “if this is so, then the Lord knows how to rescue the godly from trials and to hold the unrighteous for punishment on the day of judgment. This is especially true of those who follow the corrupt desire of the flesh and despise authority. Bold and arrogant, they are not afraid to heap abuse on celestial beings; yet even angels, although they are stronger and more powerful, do not heap abuse on such beings when bringing judgment on them from the Lord.”

Luke 4:41 “And demons also came out of many, crying, “You are the Son of God!” But he rebuked them and would not allow them to speak, because they knew that he was the Christ. “

This is what I wrote earlier that the demons knew who Jesus was but He didn’t want them to tell anyone because He had not yet gone to the cross.  They feared Him because as we read in Matthew 8:31 “The demons began to entreat Him, saying, “If You are going to cast us out, send us into the herd of swine.”  The demons know their final destiny because “they begged [Jesus] not to command them to depart into the abyss” showing that even the demons know what their end will be (Luke 8:31).  We see this repeated often in Jesus’ presence in the New Testament like in Luke 8:28 and in Mark 1:23-26.

First Timothy 4:1 “Now the Spirit expressly says that in later times some will depart from the faith by devoting themselves to deceitful spirits and teachings of demons.”

Apparently the Holy Spirit had warned Paul that demons would infiltrate the church and teach their own doctrines.  You don’t have to look very far today to see that this is happening with increasing speed in many of today’s churches and some come as the prosperity and health gospel.  If you don’t hear the cross preached, Christ elevated, God glorified, expository (verse by verse) preaching, Bible-centered doctrine, repentance, the necessity of the blood of the Lamb of God, confession, and sin then you may be hearing a sermon from one of Satan’s own ministers.

Revelation 16:14 “For they are demonic spirits, performing signs, who go abroad to the kings of the whole world, to assemble them for battle on the great day of God the Almighty.”

If you don’t believe that demons have the power to perform signs and wonders then maybe this verse will convince you.  Pharaoh’s magicians likely invoked demonic spirits when they tried to imitate Moses’ miracles during the Exodus.  Only God in Jesus Christ has power over demonic spirits.  We should not be amazed if we see an amazing sign or miracle someday because their source could be demons.

Here is concrete evidence that the “gods” of the pagan religions where really demons.  How far did some of these practices go?  We can see that they actually went so far as to sacrifice their own sons and daughters and even children in the fire.  Even the cults of today have a different Jesus than the one Who is in the New Testament. If you don’t have the right Jesus then you truly don’t have Jesus at all!

Zechariah 13:2 “And on that day, declares the Lord of hosts, I will cut off the names of the idols from the land, so that they shall be remembered no more. And also I will remove from the land the prophets and the spirit of uncleanness.”

The day is coming when God will finally judge these demons but notice in this verse that He will also judge the prophets and from the context of this chapter, He means false prophets.   It seems that there are no shortages of false prophets today who claim that God speaks to them and foretells the future.  I hope they are right because if they aren’t, their fate will be the same as those spirits “of uncleanness” or demons which are what they really are.

If you have never repented of your sins, confessed them to God (meaning you agree with Him about your sinful state), and placed your trust in Christ, then you will face the same fate as the demons and Satan himself, although maybe not as harsh in judgment as they.  Choose today to believe in Jesus Christ as Lord and Savior.  If you believe in Jesus Christ, you can be saved (John 3:15-17) but if you refuse, you stand at this moment condemned (John 3:18) and if you were to die in a state of unbelief, you will face the wrath of a Holy God on Judgment Day (Rev 20:11-15).  I pray that is not so for you.

August 17, 2014 Should Christians Live Together Before Marriage?
Recent Comments
2 Comments | Leave a Comment
Browse Our Archives
get the latest from
Evangelical
Sign up for our newsletter
POPULAR AT PATHEOS Evangelical
1 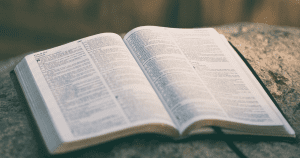 Evangelical
What Is Spiritualism?
Christian Crier
TRENDING AT PATHEOS Evangelical