Human anger usually doesn’t turn out well.  What are 7 Bible verses that are related to anger in the hopes that we can control it and it not control us?

Jesus got angry when He encountered the duplicity and hypocrisy of the Pharisees and when He turned over the moneychangers table in the temple He shows by example that anger is okay if it is for the right reasons.  If our anger leads to sin then it is not righteous anger but if our anger makes us seek to find justice or to defend the widows, orphans, the poor or other disenfranchised people, it can actually be a good thing.  God is angry at the sinner every day as Psalm 7:11 says “God is a righteous judge, and a God who feels indignation every day” and “If a man does not repent, God will whet his sword; he has bent and readied his bow” (Psalm 7:12). God revealed His wrath which was displayed on the cross and placed on Jesus Christ for us who deserved it.  These Bible verses on wrath are intended to show us that God is always justified when He displays anger but humans frequently use it to their own hurt and to the hurt of others.

James 1:20 “The anger of man does not produce the righteousness of God.”

God’s anger is due to His righteousness but the anger of man cannot produce God’s righteousness because He doesn’t usually use his anger in a righteous way and the fact that man is not righteous.  God displays His anger against sin but man often pours out his anger for inferior motives.  Maybe someone has harmed him financially or humiliated him in front of others.  These could be the result of what the man did and it may have been well deserved.  One man that I used to work for was berated at a staff meeting in front of others and he was angry but it turned out that he had been siphoning off money from the company for his own benefit and not for the good of the company.  This man got so angry that he started swearing and cussing. Did it produce the righteousness of God? No, it got him fired.

Ephesians 4:26-27 “Be angry and do not sin; do not let the sun go down on your anger, and give no opportunity to the devil.”

Clearly, there is a time to be angry and we can be angry for the right reason and not sin but the key is to “not let the sun go down on your anger.”  That doesn’t mean that you have to get rid of your anger by sunset but it means that it shouldn’t linger for days upon end.  If the anger doesn’t cease, you give “opportunity to the devil” to get a foothold in your life.  It’s not sin to be angry but it is to stay angry.  We can be angry when we see a child abused or someone unfairly taken advantage of but we have to turn it off and realize that God will make all things right someday so “never avenge yourselves, but leave it to the wrath of God, for it is written, “Vengeance is mine, I will repay, says the Lord” (Rom 12:19). If your anger leads to revenge or avenging something yourself, you take God’s place on the judgment seat and this shows that you don’t trust God to do justice, which He will in time…maybe not your time, but He will. Remember that God says “The Lord will judge his people” (Heb 10:30b) and the unsaved (Rev 20:11-15; Dan 12:1-3).

Proverbs 29:11 “A fool gives full vent to his anger, but a wise man keeps himself under control.”

Too often you hear of someone losing their temper and doing something drastic. I saw on TV from a security camera a man who was so outraged by a woman slipping into a parking space ahead of him he began smashing into the woman’s car over and over again.  His anger was not a righteous anger but a foolish anger and this was not wise at all because he ended up going to jail for destruction of property and endangering the life of someone (the woman who was still in the car).  The wise man or woman “keeps himself under control” because the wrath or anger of man seldom turns out well.  For the patient man, “it is to his glory to overlook an offense” (Prov 19:11b). Was it really worth losing his freedom, paying thousands of dollars for two cars being damaged, and paying a heavy fine…just a parking space?

Proverbs 15:18 “A hot-tempered man stirs up dissension, but a patient man calms a quarrel.”

Maybe this is why Jesus said “Blessed are the peace makers for they shall be called the children of God” (Matt 5:9).  If you want to stir up dissension, then have a “hot-tempered man” try to negotiate an argument.  The patient man will calm the quarrel because “A soft (or gentle) answer turns away wrath, but a harsh word stirs up anger” (Prov 15:1).  A calming voice calms things down but a harsh word stirs things up.  A patient man throws water on a fire but a hot-tempered man throws gasoline on a fire to try to stop it.

That’s about as serious as it gets.  Anyone that hates their brother is liable to the judgment of God.  If that weren’t clear enough, John writes that “Everyone who hates his brother is a murderer, and you know that no murderer has eternal life abiding in him” (1 John 3:15). Jesus doesn’t narrow it down to Christians or the unsaved.  No, He says this to “Everyone!”

Psalm 37:8 “Refrain from anger, and forsake wrath! Fret not yourself; it tends only to evil.”

Here is a clear, imperative command from the Bible to refrain from anger and wrath because it only leads to evil, which we have already read about in the previous verses.  To “fret not” means “don’t worry” in the context of not worrying about things, especially those things that are out of our control, and not letting anger and wrath get the best of you because only bad can come from it, you can count on that.

Ecclesiastes 7:9 “Be not quick in your spirit to become angry, for anger lodges in the heart of fools.”

The seventh Bible verse on anger is to not be “quick in your spirit to become angry” which means, don’t have a hair-trigger or a trigger finger on your wrath because anger rests in the heart of fools.  If anger is resting in the heart this means that it’s really a heart issue and that person who has that anger needs to repent of it and pray for God’s forgiveness. 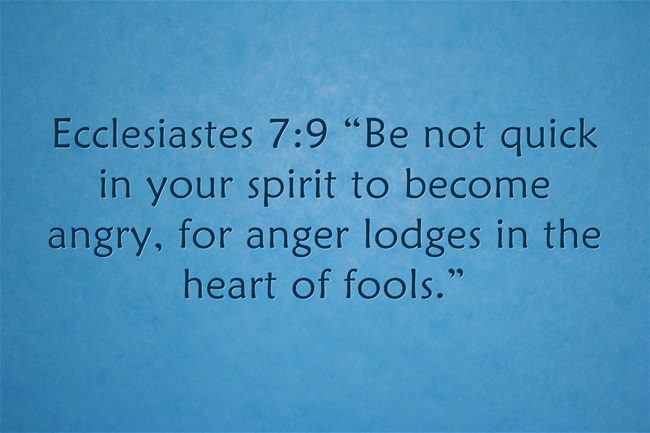 We all get angry from time to time but we are commanded to “not grieve the Holy Spirit of God, by whom you were sealed for the day of redemption.  Let all bitterness and wrath and anger and clamor and slander be put away from you, along with all malice.  Be kind to one another, tenderhearted, forgiving one another, as God in Christ forgave you” (Eph 4:30-31).  If we let anger build up and let the sun go down on our anger, we give the Devil and opportunity to do evil in our lives. This grieves the Holy Spirit.  Instead, we should be tenderhearted, forgiving, and kindhearted because “God in Christ forgave” us.  Can we not do the same for others?