Christians understand that God is sovereign over all that happens.  What are some of the best Bible verses that show this?

Sovereignty can be defined as having supreme authority, control, and power over all that has happened, is happening, and will happen in the future in all times across all history.  Christians define it as the ruler of the universe, God, having the right, the authority, and the power to govern all that happens and what has, is, or will happen being in accordance to His divine will. He has the right to achieve His purposes and has the power to bring about circumstances that dictate whatever He wills to come to pass.   He has complete control of everything and there is nothing that is done that is not done by or allowed through His will.   This is expressed by Paul in Romans 8:28 as he writes that “we know that for those who love God all things work together for good, for those who are called according to his purpose.”

For those who are God’s chosen, they are “those whom he foreknew he also predestined to be conformed to the image of his Son, in order that he might be the firstborn among many brothers.  And those whom he predestined he also called, and those whom he called he also justified, and those whom he justified he also glorified” (Rom 8:29-30).  His sovereignty includes those who have “been predestined according to the purpose of him who works all things according to the counsel of his will” (Eph 1:11).  That is because He is “far above all rule and authority and power and dominion, and above every name that is named, not only in this age but also in the one to come” (Eph 1:21).  Knowing this we ought to “Note then the kindness and the severity of God: severity toward those who have fallen, but God’s kindness to you” (Rom 11:22).

There is no reason to question the authority and sovereignty of God just because we don’t understand what is happening or what did happen because “Has the potter no right over the clay, to make out of the same lump one vessel for honorable use and another for dishonorable use” (Rom 9:21)?  He is free to choose whom to save, He has every right to do what He purposes and all that He does is according to what pleases Him.  Don’t we do the same thing? 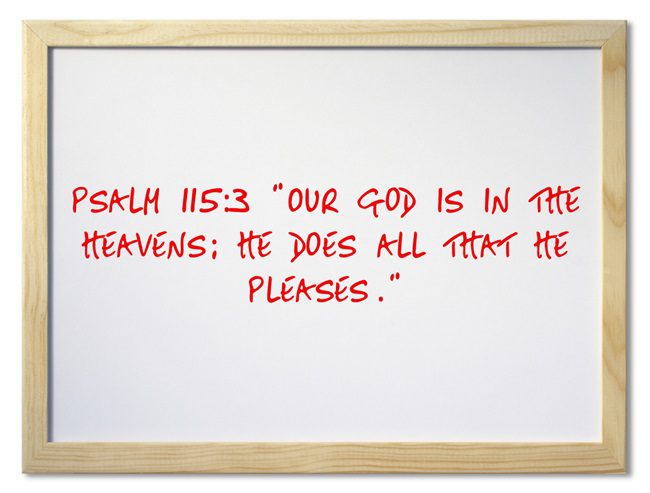 Proverbs 16:9 “The heart of man plans his way, but the Lord establishes his steps.”

What this verse is saying is that humans might think that their plans are of their own accord, but it is actually “the Lord [Who] establishes his steps.”   Even our bad choices are used for God’s purpose in His sovereignty.

Genesis 50:20 “As for you, you meant evil against me, but God meant it for good, to bring it about that many people should be kept alive, as they are today.”

Joseph’s brothers at first tried to kill him, and then they sold him into slavery but what was done with evil intent, God used for good.  That aligns with what the previous verse said (Prov 16:9) and with God’s sovereignty, even over bad things that happen.

Romans 8:28 “And we know that for those who love God all things work together for good, for those who are called according to his purpose.”

I understand that I quoted this already when I was describing God’s sovereignty but I wanted to expand on this verse by seeing how it applies only to “those who love God” and only “for those who are called according to his purpose.” Someone who is not yet saved but will be, this verse is applicable but for those who plan to forever reject the Son of God, Jesus Christ, all things work out for the bad (Rev 20:11-15), not the good.

Isaiah 40:23 “who brings princes to nothing, and makes the rulers of the earth as emptiness.”

The “who” in this verse is talking about God because He can bring to nothing the plans of the most powerful rulers on earth and make their rule come to nothing.  Mankind might think he is in charge but even Jesus told Pilate “You would have no authority over me at all unless it had been given you from above” (John 19:11).  Pilate thought he was in control, but truly, God was sovereign even over Pilate’s decision and his position of power. It was not of human origin but by the will of God.

Second Chronicles 20:6 “O Lord, God of our fathers, are you not God in heaven? You rule over all the kingdoms of the nations. In your hand are power and might, so that none is able to withstand you.”

Again, here is Scriptural evidence that God is ruler over all the nations. It doesn’t matter that the world’s rulers know this or not.  That’s irrelevant.  The fact is that “in [God’s] hand are power and might [and] none is able to withstand [Him].  God has all power and is all mighty so no one can stand up to Him or make Him change His mind or His plans.

Zechariah 4:6 “This is the word of the Lord to Zerubbabel: Not by might, nor by power, but by my Spirit, says the Lord of hosts.”

Zerubbabel was discouraged and thought that he could rebuild the walls of Jerusalem so God reminded him that it is not by human mind, strength, or intellect but by God’s Spirit.  If the world were sovereignly governed by the human will, mind, and strength, then total anarchy would result but thankfully, God is in control of all that happens, and so much so that not even a tiny sparrow falls to the ground without God’s knowing it or sovereignly allowing it (Matt 10:29).

The fact is that mankind has freewill.  Any that come to Christ can be saved (John 3:16-17; 6:37, 29) but they must repent and believe in Him (Rom 10:9-13).  In God’s sovereignty He allowed Jesus to be murdered and He Who knew no sin was allowed to die for those of us who were sinful so that when God would look at those who trust in Christ, He would see Jesus’ own righteousness (2 Cor 5:21).  Choose today whether you will have eternal life in Christ or whether you will reject Him and forever have the wrath of God placed upon you (John 3:18b, 3:36b).

September 11, 2014
What are the Differences Between Paradise and Heaven in the Bible?
Next Post