What are the Differences Between Paradise and Heaven in the Bible?

Are heaven and paradise the same thing?  Did the thief on the cross go to heaven or paradise?

Jesus told the thief on the cross “Truly, I say to you, today you will be with me in Paradise” but where is paradise (Luke 23:43)?  Is this heaven or is it a different place?  Jesus told the church at Ephesus “To the one who conquers I will grant to eat of the tree of life, which is in the paradise of God” (Rev 2:7) so apparently paradise is where God is at because it is called the “Paradise of God” and Jesus told the thief that he would be with him in Paradise that very day.  Paul once stated that he “was caught up into paradise—whether in the body or out of the body I do not know, God knows—and he heard things that cannot be told, which man may not utter” (2 Cor 12:3-4). It must be a place that is so wonderful that he cannot even describe it and was apparently told not to describe it or tell other what is was like.  Maybe that’s because if we really knew what Paradise or heaven was like, we’d want to check out of this life and go there right now.  Paradise in the Jewish vernacular described heaven as being in the place where God is at.  It has been said to be “in the bosom of Abraham” (Luke 16:19-30). The Garden of Eden is sometimes referred to as Paradise, as some translations say in Genesis 3:8.  Paradise is also said to be a higher place, a holy of the holiest places where there is no sin.  The Jews word for Paradise is “pardes” and is actually a borrowed word from the Persian word that means “park” or “garden” and in some Rabbinical circles is thought of as Eden restored.

To me, heaven is any place where God is at and it appears that Paradise is heaven, but it’s just another name for it.  When Jesus Christ returns and establishes His kingdom on this earth, heaven comes down to earth and believers don’t actually go “up” to heaven.  In Revelation 21:1-4 John “saw a new heaven and a new earth, for the first heaven and the first earth had passed away, and the sea was no more.  And I saw the holy city, New Jerusalem, coming down out of heaven from God, prepared as a bride adorned for her husband.  And I heard a loud voice from the throne saying, “Behold, the dwelling place of God is with man. He will dwell with them, and they will be his people, and God himself will be with them as their God. He will wipe away every tear from their eyes, and death shall be no more, neither shall there be mourning, nor crying, nor pain anymore, for the former things have passed away.”

John was “carried me away in the Spirit to a great, high mountain, and showed me the holy city Jerusalem coming down out of heaven from God, having the glory of God, its radiance like a most rare jewel, like a jasper, clear as crystal.  It had a great, high wall, with twelve gates, and at the gates twelve angels, and on the gates the names of the twelve tribes of the sons of Israel were inscribed—on the east three gates, on the north three gates, on the south three gates, and on the west three gates.  And the wall of the city had twelve foundations, and on them were the twelve names of the twelve apostles of the Lamb” (Rev 21:10-14). Once more, John reveals that heaven is to come down to the earth and the Kingdom of Heaven will be the New Jerusalem which will be the capital of all the earth and from where Christ and His saints will rule.

When heaven comes down as the New Jerusalem, there will be a “the tree of life with its twelve kinds of fruit, yielding its fruit each month. The leaves of the tree were for the healing of the nations.  No longer will there be anything accursed, but the throne of God and of the Lamb will be in it, and his servants will worship him.  They will see his face, and his name will be on their foreheads.  And night will be no more. They will need no light of lamp or sun, for the Lord God will be their light, and they will reign forever and ever” (Rev 21:2b-5).  The “tree of life” has the same name as the tree of life in the Garden of Eden (Gen 2:9) so in a sense, the Jew’s may have the right idea in the sense of having Eden restored but this will be so much better than Eden for there will be no more sin or the sorrow that sin brings and the greatest of these sorrows is death which has been conquered by Jesus Christ’s victory at Calvary (Isaiah 25:8; 1 Cor 15:54).

The Difference Between Heaven and Paradise

The only real difference that I could find between heaven and Paradise is the use of the word.  Both describe the presence of God.  Both describe a utopian state.  Both describe the absence of sorrow, suffering and sin.  All of the Old Testament saints will be there along with those who are now departed and with the Lord.  We could describe Paradise and hell or hades as temporary holding places until the New Jerusalem is established and the dead are joined back with their physical bodies.  For those who have died in the faith, we know that they are present with the Lord right now because if a person is absent or deceased from their body, they are in the presence of the Lord (2 Cor 5:8).  Of this fact, Paul was confident and since God’s Word is without error, we know that anyone that has repented and trusted in Christ will be with the Lord after they breathe their last breath on this earth. 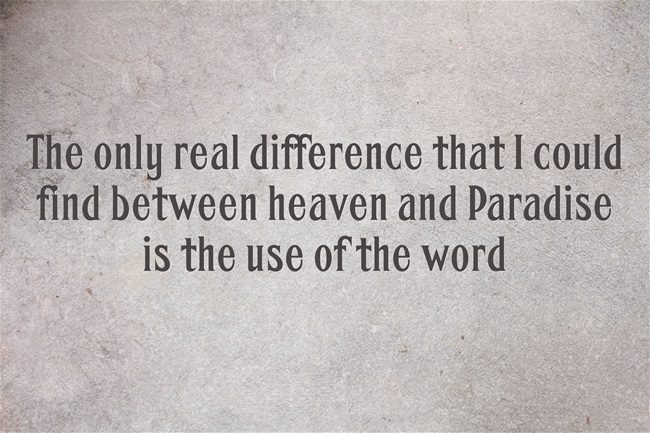 If you have never had a time of repentance, confession of sin, and putting your trust in Christ, Paradise or heaven is not your destination.  You only have a fearful expectation of your awaiting judgment by God (Rev 20:11-15).  There is no need to worry about what happens after death if you are born again because whoever believes in Jesus Christ will be saved (Acts 4:12) because He so loved the world that He died for those who would trust in Him (John 3:16-17).  Is that you? I pray it is.

September 11, 2014
What Are The Differences Between Law and Grace in the Bible?
Next Post

Progressive or Evangelical?
Over the past year or so I’ve been writing for Patheos, several...
view all Evangelical blogs
What Are Your Thoughts?leave a comment
Copyright 2008-2021, Patheos. All rights reserved.
Close Ad