What Are The Differences Between Law and Grace in the Bible?

What Are The Differences Between Law and Grace in the Bible? September 11, 2014 Jack Wellman

Are grace and law opposed to one another?  Since we are under grace, do we still have to keep the law?

Grace is God’s unmerited favor which He bestows upon all those who repent and trust in Christ.  Grace has been called; God’s riches at Christ’s expense.  God gives us what we do not deserve.  If grace were merited, then it wouldn’t be grace anymore but salvation by works and no one is saved by works.  Paul clearly defined this in Romans 11:6 writing “But if it is by grace, it is no longer on the basis of works; otherwise grace would no longer be grace” and “For by grace you have been saved through faith. And this is not your own doing; it is the gift of God, not a result of works, so that no one may boast” (Eph 2:8-9).  That’s good news for us because no one can possibly keep the law perfectly.  Only Christ could and did so He kept the law for us who couldn’t so that we could receive eternal life by faith.

Is the Law Void?

Since we are under grace, does this mean that we don’t have to worry about the law? Paul answers the question about the law by telling the church at Rome, “Are we to continue in sin that grace may abound?  By no means! How can we who died to sin still live in it” (Rom 6:1-2)?  Further, he says “What then? Are we to sin because we are not under law but under grace? By no means! Do you not know that if you present yourselves to anyone as obedient slaves, you are slaves of the one whom you obey, either of sin, which leads to death, or of obedience, which leads to righteousness” (Rom 6:15-16)?  Just because we are not under the law but under grace doesn’t mean that we are free to break the law.  The truth is that we should desire to obey God because we love Him as Jesus said “If you love me, you will keep my commandments” (John 14:15).  Love is equated with a desire to live an obedient life.  We should want to obey God because we love Him and we are indebted to Him by His freeing us from the eternal death penalty that we all deserved and that the law had brought.  When Paul writes about the law, he is not referring to the Mosaic Law which was nailed to the cross by Christ but he was referring to the Ten Commandments which have never been voided.  How can we say that God has done away with “You shall not murder, you shall not bear false witness,” or “You shall not commit adultery?” 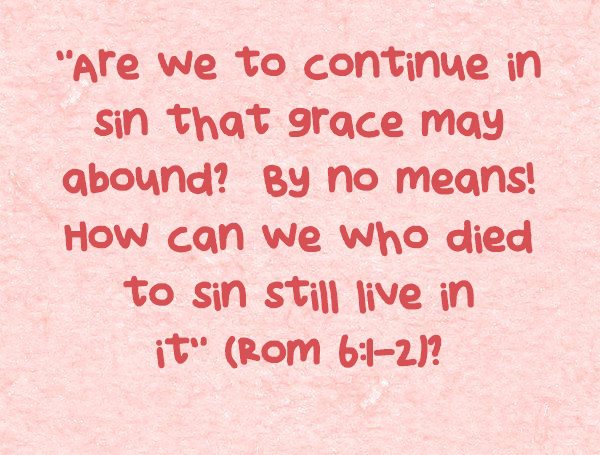 The Purpose of the Law

Freed from the Law

Paul reassures us that we are no longer under the law by saying “when you were slaves of sin, you were free in regard to righteousness” (Rom 6:20) and “now that you have been set free from sin and have become slaves of God, the fruit you get leads to sanctification and its end, eternal life” (Rom 6:22). Furthermore, “you also have died to the law through the body of Christ, so that you may belong to another, to him who has been raised from the dead, in order that we may bear fruit for God” (Rom 7:4).  Does this mean “That the law is sin? By no means! Yet if it had not been for the law, I would not have known sin. For I would not have known what it is to covet if the law had not said, “You shall not covet” (Rom 7:7).

Don’t lose heart if you continue to fall into sin.  The only true concern is that if you continually practice sin as a pattern or a lifestyle.  If there is no conviction of sin, that is a warning sign that your conscience may be getting seared because the more you sin, the less you care that you sin.  Like a callous forms on a hand that is continually working and then becomes less sensitive, so too does sin have the effect of desensitizing us that something is wrong.  Like Paul, “I see in my members another law waging war against the law of my mind and making me captive to the law of sin that dwells in my members” and like him, I cry out “Wretched man that I am! Who will deliver me from this body of death?” but then we can give “Thanks…to God through Jesus Christ our Lord! So then, I myself serve the law of God with my mind, but with my flesh I serve the law of sin” (Rom 7:23-25).  That is good news because if you are waging war with the flesh, you at least know you’re on the right side of the battle. If there is no war against sin, if there is no conviction of sin, and if there is no godly sorrow or repentance, take warning because “whoever does not practice righteousness is not of God, nor is the one who does not love his brother” (1 John 3:10b) because “Whoever makes a practice of sinning is of the devil” (1 John “8a) and “Whoever says “I know him” but does not keep his commandments is a liar, and the truth is not in him” (1 John 2:4).

September 9, 2014
Top 7 Bible Verses About Prayer and Praying
Next Post

September 11, 2014 What are the Differences Between Paradise and Heaven in the Bible?
Recent Comments
3 Comments | Leave a Comment
Browse Our Archives
get the latest from
Evangelical
Sign up for our newsletter
POPULAR AT PATHEOS Evangelical
1

The Fundamentalist War on Wokeness is...
Euangelion
Related posts from Christian Crier