What is Biblical Inerrancy?

What does it mean when you hear someone say that the Bible is the inerrant Word of God? What is biblical inerrancy?

The word inerrancy or inerrant means without error and freedom from untruths because there is an assurance and a certainty that whatever is inerrant is also objectively true.  This doesn’t mean that a Bible cannot have a typo or misprint or a mistake made during the printing process.  If you saw that a house was on fire and it was burning down, you could call the fire department and tell them that there is a fire at such and such an address. You telling them that there’s a fire is an inerrant, objective statement but if you told them the wrong address, that would be a mistake.  The objective, inerrant truth is that a house is on fire but the person who is calling in the report to 911 may make a mistake about the address.  The inerrancy is the fact that there is a fire but the person could have made a mistake and misread the address of the house due to the smoke.  The Word of God then is said to be objectively true and free from error even though there might be a mistake made from whoever printed it.

What the Bible Says About Itself

God is clear about what the Word says like in Proverbs 30:5a “Every word of God proves true” and in Psalm 19:7 “The law of the Lord is perfect, reviving the soul; the testimony of the Lord is sure, making wise the simple.” The Bible typically refers to itself as being the Word of God and not of men which is why Paul wrote “And we also thank God constantly for this, that when you received the word of God, which you heard from us, you accepted it not as the word of men but as what it really is, the word of God, which is at work in you believers” (1 Thess 2:13).

Peter writes that “For no prophecy was ever produced by the will of man, but men spoke from God as they were carried along by the Holy Spirit” (2 Pet 1:21) while Paul testifies that “All Scripture is breathed out by God and profitable for teaching, for reproof, for correction, and for training in righteousness, that the man of God may be complete, equipped for every good work” (2 Tim 3:16). 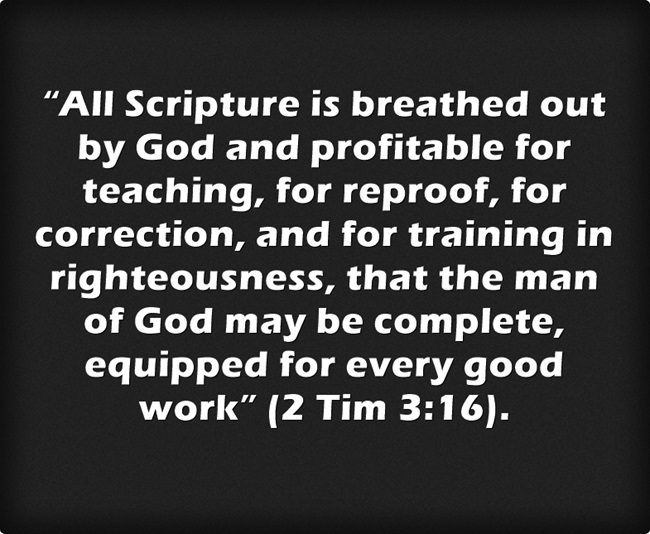 Jesus once said that the “Scripture cannot be broken” (John 10:35) and “Do not think that I have come to abolish the Law or the Prophets; I have not come to abolish them but to fulfill them.  For truly, I say to you, until heaven and earth pass away, not an iota, not a dot, will pass from the Law until all is accomplished” (Matt 5:17-18). Jesus was saying that not even one of the tiniest punctuation marks would be altered or changed unless heaven and earth would first pass away.   Jesus knew the Word of God completely (Luke 24:27) because He was the Word (John 1:1, 14).  On occasion, I have told the church where I pastor at that “Part of my sermon today will be perfect…the part where I read out of the Bible.”  I can say that with certainty because I have discovered in my own life that what God’s Word says, when applied and lived out, works.  God doesn’t need my testimony to prove His Word is true because Jesus, Who is God, says as much.

Jesus on the Scripture

When the Pharisees where asking Jesus about divorce He referred them back to the inerrant Word of God by saying “Have you not read that he who created them from the beginning made them male and female” (Matt 19:4) indicating that there is a proof text about what God said in the beginning about marriage.  When the disciples asked Him about the end of the age, Jesus once again referred to the Scriptures saying “Just as it was in the days of Noah, so will it be in the days of the Son of Man” (Luke 17:26).  When the Sadducees were trying to trip Jesus up with a question about the resurrection, which they did not believe in, Jesus said “But that the dead are raised, even Moses showed, in the passage about the bush, where he calls the Lord the God of Abraham and the God of Isaac and the God of Jacob.  Now he is not God of the dead, but of the living” (Luke 20:37-38).  Obviously, by Jesus quoting Scripture He believed that it was fully truthful and trustworthy and so if Jesus believed in the Scriptures, and He Himself was without error, sin, or mistake, we too can trust the Word.

Since we know that the Bible is without error and Jesus is too, we can trust the Word of God and what it says because it is not the word of a man (2 Pet 2:21) but the very breath of God (2 Tim 3:16), it is God’s own words (1 Thess 2:13), it cannot ever be broken (John 10:35), because it is always true (Prov 30:5a), and is here to stay forever (Matt 5:17-18).  Jesus said that “unless you repent, you will all likewise perish” (Luke 13:3b) because repentance is necessary “so that your sins may be blotted out” (Acts 3:19b) which explains why He commanded the disciples “that repentance and forgiveness of sins should be proclaimed in his name to all nations, beginning from Jerusalem” (Luke 24:47).  Since we know that these statements are true, because they are contained in the Scriptures and because Jesus told them, we can say with authority that if you have never repented and trusted in Him, you will die in your sins (John8:24).  I plead with you to do so today…while it is still called today (2 Cor 6:2) and not Judgment Day (Rev 20:11-15).

September 15, 2014
What is the Bible Definition of a Saint?
Next Post