What Does Amen Mean in the Bible? Why Do Christians Say Amen?

You read the word “amen” quite often in the Scriptures and hear it but what exactly does the word amen mean?

What is the Hebrew Form of Amen?

The Hebrew word used for amen in the Old Testament is “ei men” and means “so be it, verily, true,” or “truly” (literally “truth”) and is a declaration of your affirmation of what was just spoken or written.  It is like the pastor saying “Jesus is God” and some in the congregation say “amen” or “truly.”  Amen is frequently used at the end of a prayer or a statement that is true.  You could say “The Word of God is the inspired Word of God” and those who agree would say “amen” or “truly it is.”  In Psalm 41:13 is says “Blessed be the Lord, the God of Israel, from everlasting to everlasting! Amen and Amen.”  What David concludes in this psalm about the graciousness of God is not only one amen but he repeats it twice and in the Jewish literature, this is the greatest of emphasis possible.  The only greater emphasis that is possible in Jewish literature is to say it or write it three times and that is only reserved for God where it is said that He is “holy, holy, holy” in Isaiah 6 and a few other places.  If we read it according to what this word means, we could read it as; “Blessed be the Lord, the God of Israel, from everlasting to everlasting! Truly and verily.”

What is the Greek Form of Amen?

The Roots of Amen

The word amen has roots in the Semitic word “truth” so even today when amen is spoken, it is like saying “yes, true,” or “that is true.”  We should never say amen just because others are saying it, instead we should only say amen if we are in personal agreement with what was just said because we are acknowledging what was just spoken is absolutely true.  More than that, it is a willingness to submit oneself to that statement and believe the implications of what preceded “amen.” 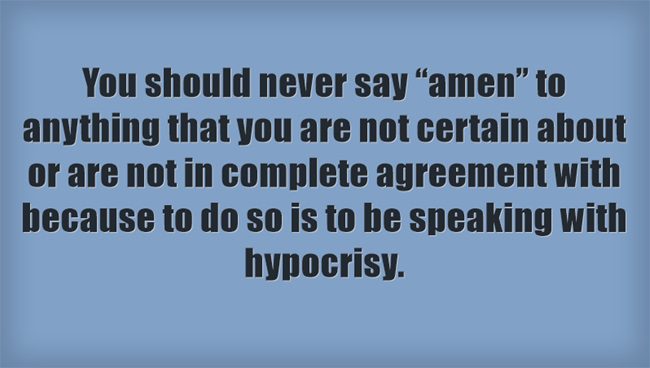 You should never say “amen” to anything that you are not certain about or are not in complete agreement with because to do so is to be speaking with hypocrisy.    If you have repented and trusted in Christ, then you can say “amen” to this statement of Jesus: “Truly, truly, I say to you, whoever believes has eternal life. I am the bread of life” (John 6:47).   To this I can most certainly say “amen” and “this is true” because I believe this is an objective truth that cannot ever be wrong.  Not only can’t it be wrong because Jesus is God and God cannot lie but I believe that everything Jesus said was true.  If you believe this, then you already possess eternal life and if indeed you believe this, then you shall never perish (John 3:16).  Amen and amen to that!

October 6, 2014
What Does Unequally Yoked Mean in the Bible?
Next Post

October 7, 2014 What Does Blasphemy Mean in the Bible?
Recent Comments
0 | Leave a Comment
Browse Our Archives
Related posts from Christian Crier