What is the Meaning of B.C. and A.D.? When Did This Originate?

Our society dates years as either A.D. or B.C. but when did this begin and why do we date years by this method?

If you were dating something, anywhere from today or years ago, you would either put an A.D. or a B.C. so why do we use A.D.?  A.D. is Latin for Anno Domino which means “year of our Lord” or “in the year of our Lord.” If you were noting something from about 500 years ago, you would put the date as A.D. 500 but today, many have changed this to C.E. which means Common Era so that they intentionally avoid using the Christian way of dating years.  If some historical event is denoted as A.D. 500 it means it was 1,500 years ago.   Dionysius Exiguus who was a monk, created the term during the Middle Ages around the sixth century for the Pope who commissioned him to determine the correct date for Easter.  His dating method was based upon the date of Jesus Christ’s birth as of A.D. 1, even though biblical scholars believe Jesus’ birth was actually closer to 6-4 B. C.  Some incorrectly believe that A.D. means “after death” but A.D. is most certainly referring to “Anno Domino” or “year of the Lord.”  Sometimes the term Christian Era, Common Era, and Current Era are used which is the abbreviated form for C.E.

What does B.C. Mean?

This one is easier to determine if you know what A. D. means.  B.C. simply means “before Christ.”  Some people use the modern term B.C.E. or “Before the Common Era” because they want to avoid using a Christian term to date events or times in history, although both C.E. (Common Era) and B.C.E. are still not in predominant use.  Anytime you see B.C.E. (Before the Common Era) it is the same as B.C. (Before Christ) and every time you see C.E. (Common Era) it is the same as A.D. (year of our Lord).

Christ:  The Focal Point of History

If you say that you were born in 1964 you are saying that you were born nineteen hundred and sixty-four years after the birth of Christ.  The focal point of time itself is centered on the birth of Christ and is the dividing point of time in world history.  Faith in Jesus Christ is still dividing; it is dividing families, friends, and sometimes even nations.  There is a strong push by the secular society to rid the textbooks and all historical references of B.C. and A.D. and replace them with B.C.E. and C.E. but that is simply a matter of semantics because the central focus of the change from A.D. to B.C. is still the birth of Jesus Christ.  To simply change it to B.C.E. and C.E. does not change the fact that Jesus Christ the Lord is the Person Who has had the most written about Him than any other single person in all of human history.  There is no one that has had a greater impact on the world than Jesus Christ.  He is either worshiped or despised.  He is either known as God or He is known as only a great prophet, like the vast majority of Muslims believe.   What cannot be denied is that whatever abbreviation you use for the year, the year and abbreviation still originated in the birth of Jesus Christ.   That will never change. 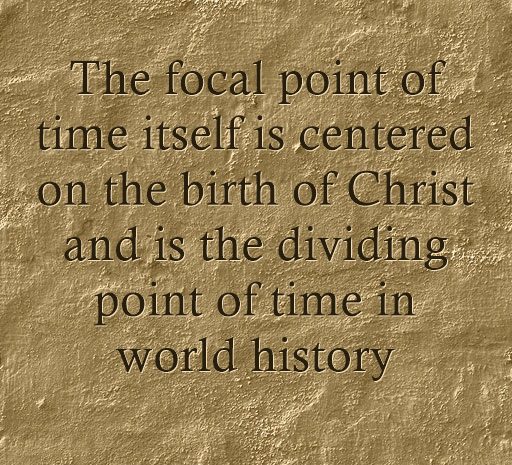 As I already mentioned, there is no one who has been the central focus of human history like Jesus Christ has been and still is.  If you can tell me of someone who has had more written about him than Jesus Christ, I would like to know.  Christianity is the single, greatest force in the world and there are more Christians in the world than of any other religion (32.8%) and even though atheism is growing rapidly, it still only accounts for 2% of the world’s population. 1  Only Islam, at about 1 in 5 globally (22.5%) is close to that of Christianity, which is about 1 in 3 people (32.8%).   This greatest of all human religions started with one Man…the God-Man and can be found on every continent on earth.  You don’t have to look far to see the voluminous historical accounts of Jesus Christ’s existence, His life, and His death and the impact that He has had and is still having on the world.  That fact is indisputable.  You may not like Him, you may even hate Him, but you cannot deny His existence and the impact that He has made upon humanity.  His story is His-story!

Even time itself is marked by the greatest Person Who has ever and will ever live, Jesus Christ and Christianity still divides but so will Jesus Christ someday as we read in Matthew 25:31-40 “When the Son of Man comes in his glory, and all the angels with him, then he will sit on his glorious throne.  Before him will be gathered all the nations, and he will separate people one from another as a shepherd separates the sheep from the goats.  And he will place the sheep on his right, but the goats on the left.  Then the King will say to those on his right, ‘Come, you who are blessed by my Father, inherit the kingdom prepared for you from the foundation of the world.  For I was hungry and you gave me food, I was thirsty and you gave me drink, I was a stranger and you welcomed me,  I was naked and you clothed me, I was sick and you visited me, I was in prison and you came to me.’  Then the righteous will answer him, saying, ‘Lord, when did we see you hungry and feed you, or thirsty and give you drink?  And when did we see you a stranger and welcome you, or naked and clothe you?  And when did we see you sick or in prison and visit you?’  And the King will answer them, ‘Truly, I say to you, as you did it to one of the least of these my brothers, you did it to me.”  But what about those who are not counted among His sheep?

Matthew 25:41-46 “Then he will say to those on his left, ‘Depart from me, you cursed, into the eternal fire prepared for the devil and his angels.  For I was hungry and you gave me no food, I was thirsty and you gave me no drink,  I was a stranger and you did not welcome me, naked and you did not clothe me, sick and in prison and you did not visit me.’  Then they also will answer, saying, ‘Lord, when did we see you hungry or thirsty or a stranger or naked or sick or in prison, and did not minister to you?’  Then he will answer them, saying, ‘Truly, I say to you, as you did not do it to one of the least of these, you did not do it to me.’ And these will go away into eternal punishment, but the righteous into eternal life.”

Which side you will be on is completely up to you.  Will you be entering into eternal life or into eternal punishment?

October 8, 2014
Top 7 Bible Verses About The Power of Words
Next Post

Heartbroken Podcast and Links
The picture I took of the park yesterday evening. I woke up...
view all Evangelical blogs
What Are Your Thoughts?leave a comment
Copyright 2008-2020, Patheos. All rights reserved.