How many of us can identify with those who struggled with their faith during a trial in the Bible?  Here are 4 such stories about people who faced great struggles and trials.

Job and His Friends

Who can say that they have suffered more than Job did?  Not anyone that I know of.   God allowed Satan to buffet Job to such a degree that he started to despair even of life and the day of his birth but don’t be too hard on Job.  His friends accused him of sin, his wife told him to curse God and die and Job never did find out the reason why God allowed him to suffer so much loss.  He lost his children, his wealth, his health, his crops, his livestock and even the relationship of his wife and best friends who turned on him and accused of him of suffering because of his sins.  Job felt like He was God’s enemy due to his suffering (Job 13:23-24) and started complaining to God about his condition (23:3-4).   Make no mistake about it, Job really struggled with his suffering, saying “I loathe my very life; therefore I will give free rein to my complaint and speak out in the bitterness of my soul.  I say to God: Do not declare me guilty, but tell me what charges you have against me. Does it please you to oppress me, to spurn the work of your hands, while you smile on the plans of the wicked” (Job 10:1-4)?  Have you felt this too?  Have you asked these same questions?   If so, you are not alone. God understands.  He knows our frame and that we are all frail, feeble, and weak, made of dust (Psalm 103:14).  It’s okay to question God and to doubt Him but we don’t need to stay there.  After God answered Job (Job 38, 39), he repented and was humbled before God (Job 42).

Even after David had been anointed king and chosen by God, he still had to run for his life.  Some scholars believe he had to run for his life from the wicked King Saul from between 7 and 10 years.  David grew frustrated from his constant running and hiding, having to live in caves and always in hiding, subsisting often on only what his men could find or what was given them by those loyal to him.  Imagine yourself as being in David’s place. God has chosen you to be the next king of Israel.  You had been anointed king already.  Time and again you had the chance to take Saul’s life but didn’t.  He was chasing you continually, wanting to kill you.  What would you say to God?   What would you be thinking?  Wouldn’t you question God or ask “Why are you allowing this God since you have already chosen me as king?”  I know for sure that I would.  Saul had a desire to kill David even before he was chosen by God to be king (1 Sam 19:10). Saul was so angry that he even threw a spear at his own son Jonathan because of David (1 Sam 20:33) and even God’s priests were murdered because of Saul’s fierce anger.  All of his anger was not justified.  David was innocent but Saul kept relentlessly pursuing him, trying to put him to death (1 Sam 23).  David cried out often to God as in Psalm 142:1-2 “With my voice I cry out to the Lord; with my voice I plead for mercy to the Lord.  I pour out my complaint before him; I tell my trouble before him.”  There is consolation in the fact that even King David poured out his heart and complaints before God but he didn’t stay there for long.  In nearly every psalm where David pours out his heart during his pain, grief, trials, and struggles but he still concludes the psalm with praising God and giving Him glory. 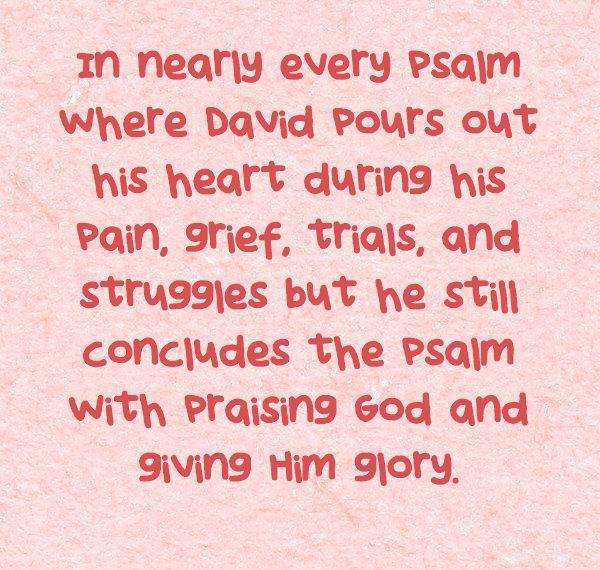 Jeremiah was called by God around 626 B.C. and was one of the most tenderhearted prophets that Israel ever had.  His heart broke for the nation who refused to listen to God’s Words given through him. They rejected every single word of his prophecies and listened to those who gave good news, even though it turned out to be false (Jer 43).  Jeremiah knew that these false prophets were only saying what the people wanted to hear, much like the modern, watered-down gospel that is being preached from behind many pulpits today.  Jeremiah’s mission was to turn the nation of Judah toward repentance and to rid the nation of idolatry which had spread throughout the land.  Sadly, God had already told Jeremiah that the people wouldn’t listen to him and would be sent into captivity (Jer 7:27; 14:12). There was nothing that Jeremiah could do to persuade the people and this made Jeremiah lament even more over the nation’s rebellion toward God.   There was no shortage of naysayers lined up against Jeremiah and his life was sought after frequently (Jer 11:21-23) and more than once they tried to stone him to death (Lam 3:53). Jeremiah was grieved over the persecution that his prophecies caused and he became a laughingstock and the target of frequent mocking (Jer 20:7) but he knew that he couldn’t keep God’s words to himself (Jer 20:9,) even if it meant long-term imprisonment (Jer 37:16).  Once “they took Jeremiah and cast him into the cistern of Malchiah, the king’s son, which was in the court of the guard, letting Jeremiah down by ropes. And there was no water in the cistern, but only mud, and Jeremiah sank in the mud” (Jer 38:6).  If anyone faced a hopeless struggle, it was Jeremiah, but even though he faced such a trial, he knew God would deliver him someday and knew that He would prosper him and this gave him hope (Jer 29:11).

How many of us would have done the exact same thing as Peter did when he denied Christ 3 times during Jesus’ trial?  I know that I would have.  Just prior to this, Peter had been bragging how he would never deny Jesus (Mark 14:26-31) but pride always comes before a fall (Prov 16:18).  Peter did deny Jesus…not once, not twice, but three times (Mark 14:66-72). After Peter denied the Lord the third time “he broke down and wept” (Mark 14:72c).  One wonders if Peter thought he had committed a sin that wasn’t forgivable.  He did just what he stated he would never do.  When I read Scriptures I believe we should not say “Wow, look how terrible that was” but instead say, “How am I like that?” or “I would have likely done the same thing.” It appears that Peter decided he was unworthy and went back to his old way of life saying “I am going fishing.” They said to him, “We will go with you” (John 21:3) but it wasn’t only Peter that did…all of them went back with him.  But the good news was that Peter was restored by the merciful Jesus (John 21:15-19) and so were the other disciples who had abandoned Him at the trial.

Many of us struggle with our faith, suffering from severe trials, but there is no faith worth having that has not been tested by fire and I have denied Christ before by my own silence when given the opportunity to witness for Him.  I have been like Peter that, by my silence, I denied the Lord before others and like him, I wept over my sin of omission.  It is my prayer that your struggles will not destroy your faith but instead will strengthen it.  A faith that is being refined becomes more precious than gold because it lasts.  Listen to what Peter says and he certainly knows from experience; “the tested genuineness of your faith—more precious than gold that perishes though it is tested by fire—may be found to result in praise and glory and honor at the revelation of Jesus Christ” (1 Pet 1:7). And Peter knows what he’s talking about.

October 19, 2014
How Does The Bible Define a Christian?
Next Post

Evangelical
How To Deal With Grief And Sorrow
Christian Crier