Top 7 Bible Verses About Taking Care Of The Poor

How do you define true joy in your life? I believe that in the Bible, JOY is spelled Jesus—Others—You…in that order. We should always put the Lord on the throne of our lives, as everything else will fall into place if we do that. Like it says in Matthew 6:33, “But seek first the kingdom of God and his righteousness, and all these things will be added to you.” Our next goal should be serving others before ourselves, and this includes taking care of those less fortunate. When we get our priorities straight, then we will have victory and joy in our lives. Included here are my choices for the top seven Bible verses about taking care of the poor.

Psalm 34:6 (ESV) “This poor man cried, and the LORD heard him and saved him out of all his troubles.”

This is a powerful passage written by David describing himself before he became King. He acknowledges and proclaims that God hears the cry of the poor and he rescues them and saves them from their troubles. He knows this for a fact, because he experienced God’s salvation first hand when he was destitute and on the run from King Saul. Later on in his book of Psalms, David encourages the reader to also take care of the poor and needy by writing, “Give justice to the weak and the fatherless; maintain the right of the afflicted and the destitute. Rescue the weak and the needy; deliver them from the hand of the wicked” (Psalm 82:3-4). In other words, not only does Father God take care of the poor, but we should also do the same as his followers.

Proverbs 22:9 (ESV) “Whoever has a bountiful eye will be blessed, for he shares his bread with the poor.”

The wise man, King Solomon, is reminding us that we should share our bread, or our food, or whatever God gives us, with those in need. In turn, God will bless us abundantly. The Lord is our provider, and everything good comes from him. Nothing is truly ours anyway, so why not bless others out of the bounty given to us by God? So it seems like a promise that if we will share what he gives us with the poor, then not only will the Lord provide for us but also we will be bountifully blessed.

Proverbs 31:20 (ESV) “She opens her hand to the poor and reaches out her hands to the needy.”

The amazingly virtuous and hard-working woman described in Proverbs 31 is a blessing to everyone around her. Her family, her friends, and even her town are blessed, because of all that she does to lead and serve in her sphere of influence. And among the list of all of her outstanding characteristics mentioned is this verse—a description of how she generously extends a hand of compassion and helps the poor. Whether male or female, it is evident that like her, we should also reach out and give aid to those in need.

Daniel 4:27 (ESV) “Therefore, O king, let my counsel be acceptable to you: break off your sins by practicing righteousness, and your iniquities by showing mercy to the oppressed [poor], that there may perhaps be a lengthening of your prosperity.”

In the book of Daniel, this great prophet and man of God was called to interpret various dreams and visions given to Babylonian rulers. This verse is about a dream that King Nebuchadnezzar had about a huge tree that was cut down but not completely destroyed. After Daniel interprets the dream for the king, he encourages him with these words to stop sinning and to show mercy to the poor and the oppressed, so that perhaps God would lessen or shorten the punishment that was coming to King Nebuchadnezzar. The prophet warned him that pride and a lack of mercy would take away his prosperity from him if he continued acting with unrighteousness. It is interesting to me that God was willing to have mercy on the king if he reached out in compassion to the poor and the needy. This makes me think that perhaps the Lord will also have mercy on us in our sinful state if we take care of the poor as well.

Matthew 19:21 (ESV) “Jesus said to him, ‘If you would be perfect, go, sell what you possess and give to the poor, and you will have treasure in heaven; and come, follow me.’”

“Red letter” words always have priority in my opinion. These are words that are printed in red in our Bibles, because they were spoken by Jesus himself. His words seem weightier or more powerful in every way, so I believe that we should follow them more closely as well. In this passage, Jesus is telling a young man that said that he wanted to follow Jesus what he needed to do as his next step of faith. That step included giving everything he had to the poor, because he would then have heavenly treasure instead. Jesus was also inviting the young man to follow him. Unfortunately, this proved too difficult for the man, as the Bible says that he was very wealthy and that he went away sadly without obeying Jesus’ directions. But if Jesus felt it was important to give to the poor and take care of them, then likewise I believe that it is important for us to do the same if we want to truly follow Jesus as his disciples.

Galatians 2:10 (ESV) “Only, they asked us to remember the poor, the very thing I was eager to do.”

When Paul came back to Jerusalem after his conversion, the disciples cautiously welcomed him. After a short time, they realized that he had been called to preach the gospel to the gentiles, and they encouraged him in that call. And he states that the only thing they asked of him was that he remember the poor. The disciples obviously thought that it was important to do this, as they themselves had chosen seven Godly men to oversee the distribution of food to the poor in Jerusalem as mentioned in Acts 6:1-7. Interestingly, it is this mention of taking care of the poor that Paul shares with the Galatians in his retelling of the story. And Paul tells them that he had been eager to comply, as he had a heart for all of God’s people everywhere. 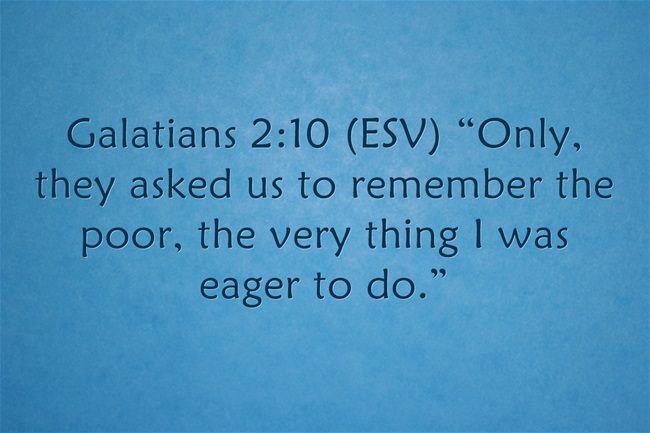 James 2:5 (ESV) “Listen, my beloved brothers, has not God chosen those who are poor in the world to be rich in faith and heirs of the kingdom, which he has promised to those who love him?”

Another important verse about taking care of the poor is found here in the book of James. This whole passage is about not showing partiality or discriminating against those that are poor. We should not give preferential treatment to the rich, because the apostle James reminds us that generally it is even the wealthy that take others to court or that cause problems. Obviously, the author is especially focusing on how Christians should treat others, as everyone deserves to be loved and respected in the Kingdom of God. Furthermore, James suggests that God has actually chosen those who are worldly poor to be rich in faith and in the Kingdom if they love Him. So we need to be sure to be kind and compassionate to all—not looking at their bank accounts or worldly possessions.

Taking care of others, and especially taking care of those less fortunate, has always been a part of God’s plan. He is always our protector and provider, but he also calls all of humanity, and especially Christians, to serve and take care of the poor. He knows that as we take our focus off of ourselves and we think about others, that we in turn are tremendously blessed. Keeping our priorities straight, will lead us to peace, abundance and joy in our walk through life.

God has been good to me over the years, and I have much for which to be grateful to Him. First of all, I feel blessed to be the pastor’s wife of a thriving church in northern Michigan and the mother of four amazing grown children. It is also very rewarding to be a Christian author, editor and translator for the Kingdom of God. Some of my favorite pastimes include supporting my children’s contemporary Christian band ONLY9AM, singing on the worship team at church, traveling, and connecting with family and friends via social media. My favorite song this year has been “You Make Me Brave” by Amanda Cook from Bethel Church, as God has recently been stretching my faith and walk with Him in new ways. When I am not working, I love spending time with my family and especially with my precious three-year-old grandson.

December 13, 2014
Top 7 Bible Verses To Say or Read Before A Game or Sporting Event
Next Post