What Does the Term Epistle Mean?

What Does the Term Epistle Mean? December 26, 2014 Jack Wellman

Have you heard of the word epistle used in the Bible? What does this word mean exactly?

Some Christians, in a recent poll, thought that an epistle was the wife of an apostle.  Seriously!  I am not making that up.  An epistle is not a person but a thing.  Not every book in the New Testament is an epistle but every letter written is an epistle.  The word used for “epistle” comes from the Greek word “epistole” and essentially means “a letter” so an epistle is a letter and most of these come from the Apostle Paul.

Epistles to the Churches

Paul could not visit every church that he helped to plant or every church that others had planted so he wrote letters to them to instruct the church in doctrinal issues.  Timothy was frequently used in the writing and the sending of the letters (epistles) to the churches in the Roman Empire.   Paul refers to Timothy in both functions in Galatians 1:1, which may have been Paul’s very first epistle ever written to a church.  He mentions Timothy in 1 Thessalonians 1:1 and Philemon 1:1.  Paul customarily opens the letters or epistles by identifying himself as the author.  Only the Book of Hebrews doesn’t mention who the author is and although there is some debate about the authorship of this letter, many believe it was written by Paul to the Jewish Christians and not really written to the Gentiles.   Although most of the church today is Gentile we can still learn so much about Christ, our High Priest, from the Book of Hebrews.

Who was the Author?

Ultimately, the Holy Spirit was behind the writings of Paul’s letters but most of the time Paul had someone else write these letters for him. Was it because of his being in prison? Was it due to his possibly having eyesight difficulties?  We do know that many of Paul’s letters were written while he was a prisoner of Rome but we must attribute all Scripture as being authored by God the Holy Spirit since we know that all Scriptures are God-breathed (2 Tim 3:16).  So even though someone else wrote the letters for Paul, for the most part, the Holy Spirit was the One who moved men to write and although Paul was not usually the one who literally wrote the letter, he was the man behind these letters (epistles).   To make sure the church knew who the letter or epistle was from he usually included his name in them in and customarily did so at the beginning of the letters.

Many of the epistles were written by Paul from behind bars and so these were called the Prison Epistles and included Ephesians, Philippians, Colossians, and Philemon.  Some of the epistles that Paul penned were called the Pastoral Epistles because they dealt with pastoral concerns of the church.  These Pastoral Epistles included 1 and 2 Timothy and Titus.  Peter also wrote some epistles even though he mentions the one who recorded them as written down by Silvanus, or Silas (1 Pet 5:16).  James may have written the very first epistle or letter in the New Testament although we know that the Apostle John had 3 that he wrote (1, 2, and 3 John) and although he wrote the Book of Revelation this wasn’t essentially called an epistle or letter but the Revelation of Jesus Christ that was given to John (Rev 1:1).  Other authors include Jude, who many believe is the half-brother of Jesus Christ. 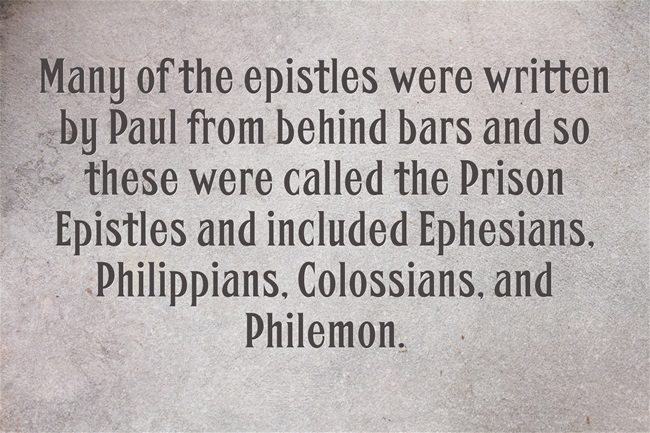 God has written a lover letter to all of mankind but the sad part is that most people won’t even open their mail.  God has sent an enormous message in the 66 books of the Bible and although it is the best seller of all time, few people actually read it.  For many, it sits and collects dust and for the most part, is never opened until a personal crisis occurs in someone’s life.  That is tragic because in this book are the words of life.  Although the vast majority of people in Judea rejected following Christ, many received Him as their Savior.  One day when many walked away because of Jesus’ hard sayings, Jesus asked the disciples if they too would walk away.  Peter responded “Lord, to whom shall we go? You have the words of eternal life” (John 6:68).  Today, if you open up your Bible you can find in these pages the way to inherit eternal life by seeing your need to repent and trust in the Savior.  There is no other name given to mankind by which we can possibly be saved (Acts 4:12).  Have you trusted in the Savior? If you haven’t and Jesus should return before you make that decision, He will be your Judge and that will not go well for you in eternity, I can promise you that.

December 25, 2014
What Does Redemption Mean In The Bible? Christian Definition of Redemption
Next Post

December 26, 2014 What Does It Mean To Seek First The Kingdom of God?
Recent Comments
0 | Leave a Comment
Browse Our Archives
get the latest from
Evangelical
Sign up for our newsletter
POPULAR AT PATHEOS Evangelical
1