Here is what I believe the7 top Bible verses on Baptism.  What ones would you include that I left out?

The process of baptism has been controversial for many years; some baptized babies by sprinkling.  Others insist on baptism by submersion but in this article, I am only addressing Bible verses on baptism with some added commentary but the word and act itself of baptism should be explained and expounded a bit.  The Greek word for baptism is “baptisma” (noun form) or “baptizō” (verb form) and means “to submerge.”  When clothing was dyed it was baptized (“baptize”) into the water and became identified with whatever color of dye that was used.  That’s what the Greeks called it. The only change that took place in the garment was that it became wet and it became the same color of whatever color of dye that was in the water so baptism is a way of being identified with whatever something was being submerged into. A white cloth submerged into a purple dye became identified with the color purple, not with the water itself.  It was the dye that changed the cloth, not the water.

Matthew 28:19 “Go therefore and make disciples of all nations, baptizing them in the name of the Father and of the Son and of the Holy Spirit.”

An important point that should be noted in this verse is that Jesus tells the disciples to baptize them “into” in the names of the Father, the Son, and the Holy Spirit and not into the water.  As I mentioned before, it makes sense that those who become disciples are to be baptized or identified with the Father, the Son, and the Holy Spirit, but it follows that those who became disciples would later be baptized in water but they first and foremost came to identified with Christ; that came first, then water baptism second.

Acts 10:47 “Can any man forbid the water, that these should not be baptized, who have received the Holy Spirit as well as we?” 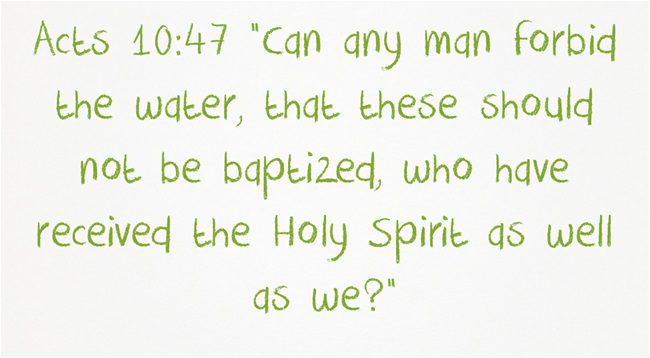 This is speaking about the necessity for the believer to be baptized because after they had been saved, evidenced by Peter’s saying that they “have received the Holy Spirit” just as, Peter says, “as well as we” it shows that the person received the Holy Spirit and after a person is saved they should be baptized. The significance of this verse is that from this point on, God opens the door for the Gentiles (and for us much later) to be saved because salvation came first to the Jew and then to the Gentiles (Rom 2:10).

Matthew 3:16-17 “And when Jesus was baptized, immediately he went up from the water, and behold, the heavens were opened to him, and he saw the Spirit of God descending like a dove and coming to rest on him;  and behold, a voice from heaven said, “This is my beloved Son, with whom I am well pleased.”

Jesus was sinless and needed no baptism for He was God Himself but He did this anyway to fulfill all righteousness and to leave us an example for us to follow.  Immediately after Jesus’ baptism, the Spirit of God, the Holy Spirit, descended upon Him and the Father spoke from heaven saying “This is my beloved Son, with whom I am well pleased.”

First Corinthians 10:1-2 “For I do not want you to be unaware, brothers, that our fathers were all under the cloud, and all passed through the sea, and all were baptized into Moses in the cloud and in the sea.”

Acts 16:31, 33 “And they said, Believe on the Lord Jesus Christ, and thou shalt be saved, and thy house. And he took them the same hour of the night, and washed their stripes; and was baptized, he and all his family”

Romans 6:3-4 “Do you not know that all of us who have been baptized into Christ Jesus were baptized into his death? We were buried therefore with him by baptism into death, in order that, just as Christ was raised from the dead by the glory of the Father, we too might walk in newness of life.”

Here is one of the clearest indications that baptism means to be identified with because Paul says that “all of us who have been baptized into Christ Jesus were baptized into his death” of which the ritual of water baptism symbolizes perfectly.  We are identified with (baptized) Christ and into (baptized) into His death, “therefore with him by baptism into death just as Christ was raised from the dead” so that “we too might walk in newness of life.”  There is no mention of water here at all but the frequent mentions of being baptized into (identified with) Christ, His death, His burial, and His being raised.

Have you been born again?  If so and you haven’t yet had a water baptism, why not?  There is every reason for you to be obedient and follow God’s command for all believers to be baptized.  By doing so, you’ll be identified with the Body of Christ, the church and you’ll be identified with the Father, the Son, and the Holy Spirit and you’ll also be baptized (or identified) into His death, burial, and resurrection, all of the things that the believer will experience for real someday.  For those who die in the faith and those who die without Christ, Daniel speaks of this time “And many of those who sleep in the dust of the earth shall awake, some to everlasting life, and some to shame and everlasting contempt” (Dan 12:2).

January 11, 2015
Three Essentials For A Biblical Church
Next Post 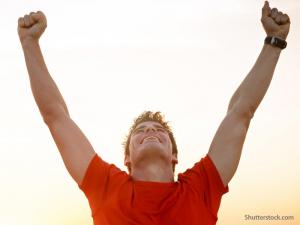