Who Were The Philistines In The Bible?

Who Were The Philistines In The Bible? May 18, 2015 Jack Wellman

The Philistines were a longtime nemesis of Israel but who were they exactly and from where were their origins?

The Origin of the Philistines

The Philistines go nearly all the back to the very beginning in biblical history where they were traced to the descendants of Noah and his sons as we read in Genesis 10:14; “Egypt fathered Ludim, Anamim, Lehabim, Naphtuhim, Pathrusim, Casluhim (from whom the Philistines came), and Caphtorim.” The name itself is accurately said to be “Philistim” in the Revised Standard Version and was a primitive tribe that was allied with the Phoenicians who were a more technologically developed tribe who lived in the Mediterranean islands and coastal areas. The Philistines and the Phoenicians were notorious for sacrificing their children in the fire. By the time that Abraham moved into the area, they had propagated throughout much of the area between Syria and Egypt. For nearly all of Israel’s existence, the Philistines where a perpetual threat and made frequent incursions into that nation’s territories. The Hebrew name for “Philistia” is related to the word “pəlishtīm” for “philistine” from whom that region between Lebanon and Egypt got its name. The cities of Philistia that lay in the convenient location between the trade routes of Egypt and Syria formed an alliance or more likely a loose confederacy for purposes of mutual defense and commercial trade.

The Philistines had been natural enemies of Israel due to the fact that they had resided in areas that bordered the nation of Israel. Both these nations continually battled for supremacy of the region. The formidable Philistine confederacy made frequent incursions into Israelite land and frequently held some of the tribes of Israel in humiliating servitude or slavery, keeping the outer lying tribes in a constant state of turmoil. The Philistines and the Phoenicians, who were the dominant naval force of the world at one time, even tried to invade and defeat Egypt but were repulsed by superior numbers and a huge Egyptian fleet. The Egyptians took the war back to Philistine but were unable to remove them from their land where they remained strongly entrenched in Palestine up to the time of the Exodus. The fact that the population started to grow rapidly about the time of the Israelites arrival in the 12th century BC only served to increase the tensions between the two people groups and would continue for a few more centuries. 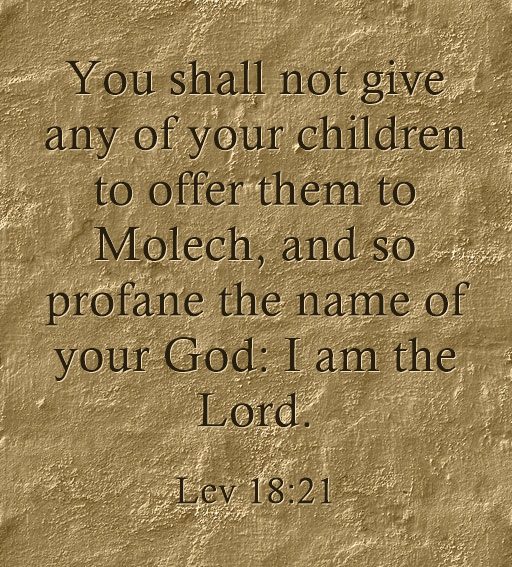 The Abominable Practices of the Philistines

Part of the reason that God wanted the Philistines out of the areas in and close to the Promised Land was because their pagan worship could have easily corrupted the Israelites and over time, it eventually did. The Philistines had one of the worst of all religious practices in their day. The chief God of the Philistines was Dagon and the god of fertility and crops, both of which the Philistines saw as critical to their existence. The root word of Dagon is “dag” meaning “corn” or “cereal” so they saw the necessity of frequent sacrifice to this god as essential to their people’s survival. Consequently, they paid homage to Dagon and like those who occupied much of the land, child sacrifice was very much a normal part of their lives just as it was with the Canaanites and the Sodomites. God had commanded the nation of Israel “You shall not give any of your children to offer them to Molech, and so profane the name of your God: I am the Lord” (Lev 18:21).   Part of the reason that God wanted these pagan nations out of the Promised Land was so that they wouldn’t be corrupted by their false religions and their abominable practices and when they didn’t, the kings of Israel finally sunk as low as their neighboring nations did as King Ahaz “walked in the way of the kings of Israel. He even burned his son as an offering, according to the despicable practices of the nations whom the Lord drove out before the people of Israel” (2nd Kings 16:3). How much more evil could a nation be when its own leader sacrificed his own son in the fire? This was, as Scriptures say, despicable and was the practice “of the nations whom the Lord drove out before the people of Israel” and we can understand why. Even the King of Moab sacrificed the life of his eldest son in a desperate attempt to preserve his kingdom as it says in 2nd Kings 3:27, “Then he took his oldest son who was to reign in his place and offered him for a burnt offering on the wall.”

The Judgment of the Philistines

The Philistines were so formidable because they had the monopoly on armament (1st Sam 17:1-11) and were the only ones in that area that had iron smiths which were skilled in making weapons and armor of iron, which was probably learned from the nation of Anatolia. Eventually, they were no match for God and through several prophets, God spoke about the coming end of the Philistines as Amos wrote “I will cut off the inhabitants from Ashdod, and him who holds the scepter from Ashkelon; I will turn my hand against Ekron, and the remnant of the Philistines shall perish,” says the Lord God” (Amos 1:8). The Philistines would finally become extinct as foretold by Zephaniah where he wrote “The word of the Lord is against you, O Canaan, land of the Philistines; and I will destroy you until no inhabitant is left” (Zeph 2:5). Today, there is no trace of these people. God placed His judgment on them for all time because of the many abominations that they had committed such as child sacrifice and the contamination of pagan worshiping of false gods that had spread to the nation of Israel and resulted in their downfall.

The Philistines has a place in history but they became history because of the most grievous of sins of any people at any time. When a nation falls as low as to be sacrificing their own children, God declares “it is enough” and that is their end. The Philistines, along with many of the other nations that offered their children as sacrifices in the fire, came to an end and so too did much the human sacrificial system in the Middle East.

May 18, 2015
Do Christian Practices Have Pagan Origins?
Next Post

May 19, 2015 Where Was Jesus Buried? A Bible Study
Recent Comments
26 Comments | Leave a Comment
Browse Our Archives
get the latest from
Evangelical
Sign up for our newsletter
POPULAR AT PATHEOS Evangelical
1