What Does The Bible and Jesus Teach About Gossip?

What Does The Bible and Jesus Teach About Gossip? June 13, 2015 Jack Wellman

I would define a gossiper as someone who habitually reveals personal, private, sensitive, and even sensational facts or assumptions about someone in an unconstrained conversation or conversations or reports that is about someone else. These “facts” reveal details that cannot be confirmed as being true and can also be simple, idle talk or rumors that are nothing short of character assassination and might even be blatant lies. In some cases the gossip is slanderous and a person can be held liable in a court of law for such accusations that cannot be verified to be true.

The Bible on Gossip

Proverbs 11:13 “Whoever goes about slandering reveals secrets, but he who is trustworthy in spirit keeps a thing covered.”

Here is what I said earlier about slandering someone’s name by revealing secrets that are none of their business in the first place. The one who is trustworthy will keep a lid on these sorts of things and whether they are true or not is beside the point…it is still wrong.

Proverbs 20:19 “Whoever goes about slandering reveals secrets; therefore do not associate with a simple babbler.”

This is exactly what gossip is; slandering others by revealing secrets and we are commanded to not even associate with such people. If they gossip, either walk away or rebuke them for what they are; a gossiping slanderer.

Want to break up a close friendship? Just start whispering or gossiping about them and when it gets back to them, and it usually does, then you’ve done it! That friendship is over. They’ll likely never trust you again with anything they say and who can blame them?

Proverbs 6:6:16-19 “There are six things that the Lord hates, seven that are an abomination to him: haughty eyes, a lying tongue, and hands that shed innocent blood, a heart that devises wicked plans, feet that make haste to run to evil, a false witness who breathes out lies, and one who sows discord among brothers.”

Here are seven things that the Lord hates and these can all be contained within one sin, gossip; “a false witness who breathes out lies,” “a lying tongue,” “feet that make haste to run to evil, like gossip,” and someone who “sows discord among brothers” and sisters.

Exodus 23:1 “You shall not spread a false report. You shall not join hands with a wicked man to be a malicious witness.”

This might not exactly be about gossiping but doesn’t gossip typically contain exaggeration and false reports? These make for a malicious witness and God commands us not to do this. 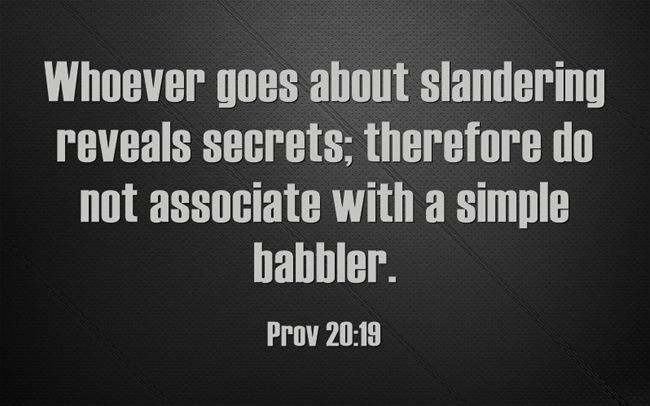 Think about anything that we might have carelessly said about others in the past. They are adding up. Those words are being stored up and will be pulled out and held as evidence against us someday and by these words we’ll either be justified or for many, condemned. Who can keep track of all the words that they’ve let slip out? Oh yeah, God can!

Luke 12:3 “Therefore whatever you have said in the dark shall be heard in the light, and what you have whispered in private rooms shall be proclaimed on the housetops.”

Obviously this isn’t someone talking to themselves in the dark but in the dark means what is being said in private to others. What has been whispered in the private rooms will be like they’ll be shouted out loud on the housetops…that means all will hear. These words can be said over cell phones, over emails, over the Internet, over text messages…and in person of course.

Stopping Gossip in its Tracks

If no one would ever listen to gossip, then it would likely die out from a lack of ears to hear but the reality is, there’s always someone who’s eager to listen and that only feeds the gossiper and enables them to keep the gossiping going. Here’s an idea; the next time someone comes up to you and gossips about someone, say this; “Wow, that’s interesting. Let’s you and I go over to them right now or let me call them and tell them how concerned you are about them from what you’ve just told me or I’ll tell them that I heard from you about what happened and so maybe we can meet with them this week and talk to them in person. Here’s my cell phone…you can call them right now or I will.” This is very effective in stopping gossip in its tracks, at least in having them gossip to you. I like to give people the benefit of the doubt but I have a cousin who can’t say anything good about anyone but she is totally different with them to their face. She always assumes the worst. She is not a fun person to be around so I tried the method I mentioned earlier and she stopped talking trash about everyone she knows, at least to me. Think about this; if someone is gossiping to you about others then what makes you think they aren’t gossiping about you behind your back!?

God hates gossip because it hurts people, it damages reputations, it assassinates their character, it causes friendships to break up, and it can destroy marriages. Remember, it will all come back on the person who said it; eventually. The next time someone gossips to you, call them out, walk away, or tell them that you’re going to inform the other person about this. Gossip needs ears to live or it dies in the mouth.

June 14, 2015 Top 7 Bible Verses About Life
Recent Comments
2 Comments | Leave a Comment
Browse Our Archives
get the latest from
Evangelical
Sign up for our newsletter
POPULAR AT PATHEOS Evangelical
1

Why Evangelicals Are So Disliked, Part...
Cranach
Related posts from Christian Crier