What Does The Bible Say About Tattoos and Piercings?

What Does The Bible Say About Tattoos and Piercings? June 17, 2015 Jack Wellman

Is the Bible silent on tattoos and body piercings? Are there commands against this practice or does the Christian have freedom in this?

Some Christians quote Old Testament Scriptures to say that body piercings and tattoos are forbidden and use such verses as Leviticus 19:28 “You shall not make any cuts on your body for the dead or tattoo yourselves: I am the Lord” but this law was written to ensure that the nation of Israel didn’t follow the pagan practices of the nations around them which did things like this but for abominable reasons. This law was not written to Christians but to the nation of Israel and that is the context of this entire chapter (Lev 19) and it is directed specifically to Israel as it says in 19:2 “Speak to all the congregation of the people of Israel and say to them.” Nowhere does this specify that it is a law that is separate from the Mosaic Law like the Ten Commandments which are still and always will be in effect. If we are to take this verse and try to shoehorn it or make it fit into the Christian’s life then we must also never “round off the hair on [our] temples or mar the edges of [our] beard” (Lev 19:27). You cannot make one part of these laws a requirement on Christians today and not make all of them a requirement. That is proof texting and taking text out of the context for which and to whom it was written makes it a pretext and a false one at that and we cannot apply the Mosaic Law to Christians today.

The Temple of the Holy Spirit

Christians who try and judge people who have body piercings and tattoos will often quote 1st Corinthians 6:19-20 which says “What? Don’t you know that your body is the temple of the Holy Spirit which is in you, which you have of God, and you are not your own? For you are bought with a price: therefore glorify God in your body, and in your spirit, which are God’s” but what is the context of this verse? Are they, once again, proof texting Scriptures to try and apply it to God’s forbidding of tattoos and body piercings? It would seem so because this chapter and this paragraph in particular are speaking about sexual immorality and not markings like tattoos or cuttings on the body. This is clear because Paul was saying “The body is not meant for sexual immorality, but for the Lord, and the Lord for the body” (1st Cor 6:13b). When Paul declared that the body is the temple of the Holy Spirit, just prior to this we can see the context as he wrote “Shall I then take the members of Christ and make them members of a prostitute? Never! Or do you not know that he who is joined to a prostitute becomes one body with her? For, as it is written, “The two will become one flesh.” But he who is joined to the Lord becomes one spirit with him. Flee from sexual immorality. Every other sin a person commits is outside the body, but the sexually immoral person sins against his own body” (1st Cor 6:15-18) so clearly and obviously he was not even talking about markings, tattoos or body piercings. The context was sexual immorality and sins that were committed “outside of the body” not on the body and whoever is involved in sexual immorality is sinning “against his own body.” How some can misapply this to tattoos and body piercings is beyond me. Could we not then say we should never color our hair because it’s the temple of the Holy Spirit? You can see just how far some could take this. 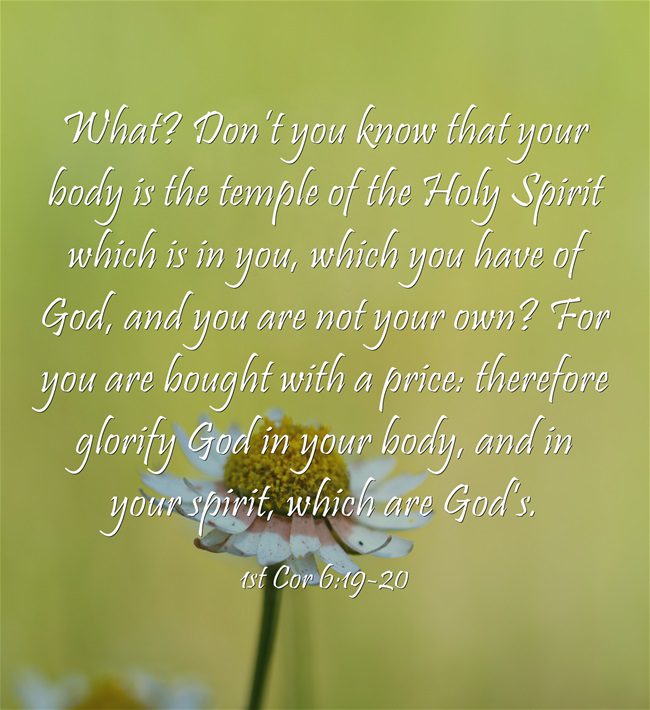 Years ago I hesitated in witnessing to a co-worker because he had tattoos all over his body and I assumed (wrongly) that he was not saved but indeed he was. I asked the Lord and my co-worker to forgive me for that false assumption. God looks at the heart and not at what is outside (1 Sam 16:7) but I was wrongly looking at the outside and I judged the man as one; unfit to be saved and two; probably not saved. I was totally wrong about both and admitted it to him and to God and repented of this immediately and today I don’t look at the outside and trust God for He can look at the heart; I cannot. I have no business judging people from the outside at all and have since then learned not to do that.

We think that today’s trend of body piercing and jewelry is new but it’s not as there isn’t really anything new under the sun (Eccl 1:4-11) because Isaiah wrote long ago that “In that day the Lord will take away the bravery of their tinkling ornaments about their feet, and their cauls, and their round tires like the moon, the chains, and the bracelets, and the mufflers, the bonnets, and the ornaments of the legs, and the headbands, and the tablets, and the earrings, the rings, and nose jewels, the changeable suits of apparel, and the mantles, and the wimples, and the crisping pins, the glasses, and the fine linen, and the hoods, and the veils” (Isaiah 3:18-23). Why would God take these away? Because these things were sinful? No, it was because they had been in a long state of disobedience to God and were into idolatry and God was going to send them into captivity (Isaiah 3:24-26) and their wealth, including their jewelry and clothing would be stripped away by their captives with the hopes that they would repent and turn back again to God.

We cannot set up our own standards to judge people by. We must rely on God to judge the hearts of people because He sees the heart and knows for sure; we can’t and we don’t know. We sometimes make false assumptions and judgments on people. The Bible does not strictly forbid tattoos and body piercings but even these can go too far. If you are a Christian, then you are a witness to the lost and the way you talk, dress, and act either glorifies God and draws people to the Savior or makes them see you’re no different from them and they see that as hypocrisy. May it never be so.