What Is Zion and The Biblical Meaning? What Is Mount Zion In The Bible?

What Is Zion and The Biblical Meaning? What Is Mount Zion In The Bible? June 17, 2015 Jack Wellman

What does the word Zion mean according to the Bible? What is “Mount Zion” in particular talking about?

The “Zion” itself simple means “fortification” like a citadel but it’s also another name that is used for Jerusalem or the City of David and is associated with God and is sometimes referred to as “the City of God.” The word Zion has a broad spectrum of meaning that is greater than any one single entity or identity because Zion was also known as the seat of power for the kingdom of Israel but also for the Kingdom of God. We know that it is a place that God loves and cares deeply about because the city is also associated with God’s chosen people, Israel. Zion is used interchangeably with Jerusalem in many Scriptures like in Isaiah 52:1-2 so any time you see the word Zion used it is referring to Jerusalem, the City of God, the City of David, the people or nation of Israel or the people of God and sometimes typifies God’s place of rule or where His presence resides like in Jeremiah 31:6 where he writes “Arise, and let us go up to Zion, to the Lord our God.”

The word “mount” is simply a shortened meaning of mountain and mountains often refer to governments or nations but often is referred to in Scripture as “the mountain of the Lord, to the Rock of Israel” (Isaiah 30:29b). In the case of Mount Zion it is representative of the Kingdom of God where we read in Hebrews 12:22 that “you have come to Mount Zion and to the city of the living God, the heavenly Jerusalem, and to innumerable angels in festal gathering.” That is where it is said “the assembly of the firstborn who are enrolled in heaven, and to God, the judge of all” (Heb 12:23) will be at and it looks ahead to the New Jerusalem that will descend out of heaven (Rev 21:10-26). 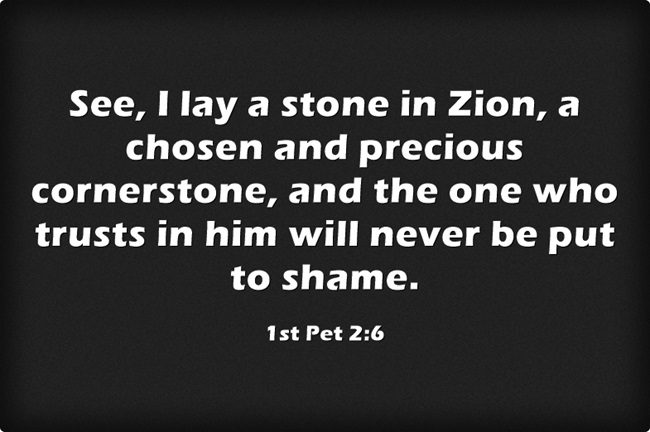 When Jesus came to do His earthly ministry it was said “Behold, I am laying in Zion a stone of stumbling, and a rock of offense; and whoever believes in him will not be put to shame” (Rom 9:33) and that “The Deliverer will come from Zion, he will banish ungodliness from Jacob” (Rom 11:26) and “the cornerstone is Christ Jesus himself” (Eph 2:20). The word Deliverer is capitalized and as such, is a proper noun; another name for Jesus Christ Who was a cause of many to stumble and offended many (“a rock of offense”) but for others who “believe in him [they] will not be put to shame” because they have trusted in the only name by which they must be saved (Acts 4:12) for He is “a precious cornerstone for a sure foundation; the one who relies on it will never be stricken with panic” (Isaiah 28:16). As was prophesied hundreds of years ago this Cornerstone came “From Judah” (Zech 10:4). Unfortunately, “The stone the builders rejected has become the cornerstone” (Psalm 118:22; 20:17) and they didn’t recognize Him. Peter did recognize Him and wrote “See, I lay a stone in Zion, a chosen and precious cornerstone, and the one who trusts in him will never be put to shame” (1st Pet 2:6).

The Seat of the Universal Kingdom

If you read much of Revelation 21 you’ll discover that the New Jerusalem will descend out of heaven and that is the central place where God will rule out of. It’s not so much that we go to heaven but heaven comes down to earth and besides, heaven is any place where the presence of God is. Heaven is not so much a place as it is a Person and that Person is Jesus Christ. In the Apostle John’s vision in Revelation 14:1 he writes “Then I looked, and behold, on Mount Zion stood the Lamb, and with him 144,000 who had his name and his Father’s name written on their foreheads.” By Jesus standing on Mount Zion we understand that He stands above and rules over Mount Zion, the Kingdom of God and that is where John “saw no temple in the city, for its temple is the Lord God the Almighty and the Lamb. And the city has no need of sun or moon to shine on it, for the glory of God gives it light, and its lamp is the Lamb. By its light will the nations walk, and the kings of the earth will bring their glory into it, and its gates will never be shut by day—and there will be no night there. They will bring into it the glory and the honor of the nations” (Rev 21:22-26)

If you’ve had a time where you have repented of your sins; that is if you’ve forsaken them and turned away from them, and then placed your trust in Christ, you will be in the New Jerusalem and have a part in Mount Zion’s Kingdom of God, but if not, know this, “nothing unclean will ever enter it, nor anyone who does what is detestable or false, but only those who are written in the Lamb’s book of life” (Rev 21:27).

June 17, 2015
What Does The Bible Say About Tattoos and Piercings?
Next Post

June 17, 2015 Can The Bible Save My Marriage?
Recent Comments
0 | Leave a Comment
Browse Our Archives
get the latest from
Evangelical
Sign up for our newsletter
POPULAR AT PATHEOS Evangelical
1

Persecution: The New Reality for Biblical...
The Chorus In The Chaos
Related posts from Christian Crier