Top 7 Bible Verses About Taking Care Of The Earth

God commands us to keep and care for the earth but God’s edict to have dominion over the earth doesn’t mean to have complete domination and exploitation of it.

Genesis 2:15 “The Lord God took the man and put him in the Garden of Eden to work it and keep it.”

God gave mankind a command and told him that he must tend or keep the garden. The Hebrew word for “tend” or some translations say “keep” it is “shamar” and it means more than just keep it neat and tidy. The Hebrew word means “to guard” or “to watch and protect.” The other Hebrew word in this verse that’s very important is the word “work” or as some translations more accurately say “to cultivate” and is from the Hebrew word “`abad” meaning “to serve” so Genesis 2:15 would better read as: “The Lord God took the man and put him in the garden of Eden to serve it and to guard and protect it.” That means that we are stewards of the earth and the Master will require of us an account on how we’ve been stewards of what He has given us. So far, it’s not been good stewardship to say the least.

Proverbs 12:10 “Whoever is righteous has regard for the life of his beast, but the mercy of the wicked is cruel.”

Laws such as “Do not muzzle an ox while it is treading out the grain” (Duet 25:4) and as Jesus asked “Which one of you who has a sheep, if it falls into a pit on the Sabbath, will not take hold of it and lift it out” (Matt 12:11)? God’s compassion and love for His creatures is evident throughout the Bible like in Exodus 23:4 where even “If you meet your enemy’s ox or his donkey going astray, you shall bring it back to him” and “If you see your fellow Israelite’s ox or sheep straying, do not ignore it but be sure to take it back to its owner” (Duet 22:1) yet we find mother cats abandoned in the middle of winter, pregnant dogs dumped in the middle of scorching Kansas summers of 100 degrees left alone. What cruelty there is among the animal kingdom and the blood is on the hands of many. 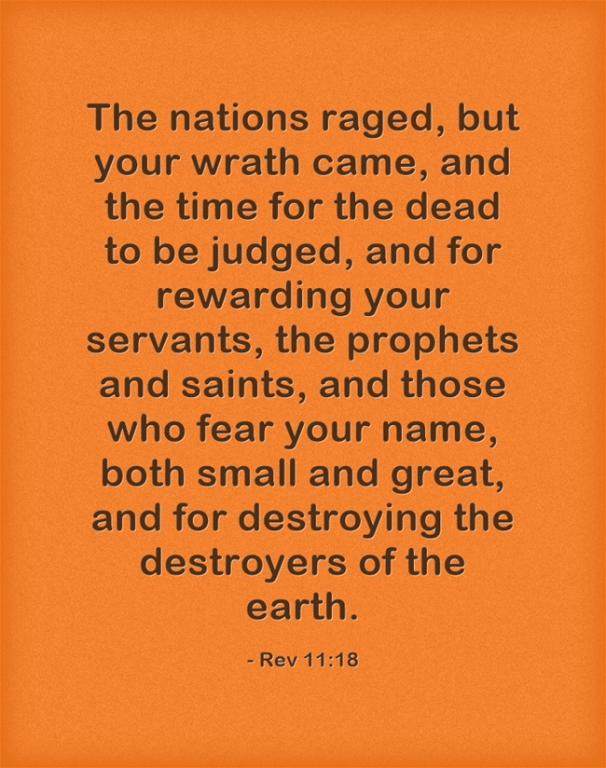 Revelation 11:18 “The nations raged, but your wrath came, and the time for the dead to be judged, and for rewarding your servants, the prophets and saints, and those who fear your name, both small and great, and for destroying the destroyers of the earth.”

God will not leave those unpunished who destroy the earth because those who do so are only interested in using and abusing the earth to make a profit but at what cost? We all are responsible for how we live our lives and if we throw trash out of the car, how we leave trash in campsites or pour out toxic wastes in the ground. Years ago our neighbor used to pour his used motor oil on the fence line so that he wouldn’t have to weed eat where the mower wouldn’t reach but his trees started to die and he ended up having to cut down two huge one hundred year old tress in his back yard. How sad.

Genesis 1:26 “Then God said, “Let us make man in our image, after our likeness. And let them have dominion over the fish of the sea and over the birds of the heavens and over the livestock and over all the earth and over every creeping thing that creeps on the earth.”

God gave mankind dominion over the earth but not in order to use or misuse it at any cost for any reason. We have destroyed many areas of the planet to suit our own needs and this earth must groan under the weight of the ravaging and pillaging of the planet.

Proverbs 27:18 “Whoever tends a fig tree will eat its fruit, and he who guards his master will be honored.”

This is a double proverb in the sense that the one who tends or takes care of the fig tree will probably tend after other things and by doing so, he is guarding his master’s possessions. We might not be able to tend the world but we can tend our own little corner of it and do what we can where we live. In our home, we recycle about 85% of our trash and that includes aluminum, steel, newspaper, junk mail, glass, plastic (4 different kinds), chipboard (like with toilet paper and paper towel rolls) and many other things to where we’ve cut out trash down to one small bag per week as opposed to it being 2 large bags every week. Food items are tossed into the compost pile.

Numbers 35:33“You shall not pollute the land in which you live, for blood pollutes the land, and no atonement can be made for the land for the blood that is shed in it, except by the blood of the one who shed it.”

God clearly commanded Israel to not pollute the land even though He was speaking about establishing cities of refuge where those who had accidentally killed someone could take refuge from any family member that wanted to avenge them, thereby shedding blood on the land but even if it’s not the exact application for taking care of the earth, the principle of good stewardship cannot be lost in this verse.

Psalm 24:1 “A Psalm of David. The earth is the Lord’s and the fullness thereof, the world and those who dwell therein.”

This is not our earth because the title holder is God and He will hold us responsible for how we care for it. As we read in Revelation 11:18, those who abuse and destroy the earth will not go unpunished and knowing that the earth is not really ours, we should treat the earth with the respect of knowing it is God’s own possession and not ours but He was still willing to share with us to use for our own good.

God commands us to keep and care for the earth but God’s edict to have dominion over the earth doesn’t mean to have complete domination and exploitation of it but sadly, this is what has happened; we continue to rape the land, denude the forests, strip-mine the hills, burn through the resources, and gut the earth. This is the only place that we have and if we chose to abuse it, it will be a choice we will live to regret.