What are 7 of the top Bible verses about deception in the Bible and what can we learn from them?

Proverbs 26:25-26 “When he speaks graciously, believe him not, for there are seven abominations in his heart; though his hatred be covered with deception, his wickedness will be exposed in the assembly.”

Many who are double-faced will say good things to your face but talk about you behind your back so someone who is deceitful can’t usually be trusted when they speak graciously about you or someone you know to their face because his true hatred is covered by deception and in time, his wickedness will be exposed in the assembly” and this might mean in a church, a place of work, or at least at the end of this age at the Great White Throne (Rev 20:12-15). Everything hidden in this life will be revealed after this life.

Second Peter 2:2, 12-13 “But false prophets also arose among the people, just as there will be false teachers among you, who will secretly bring in destructive heresies, even denying the Master who bought them, bringing upon themselves swift destruction. But these, like irrational animals, creatures of instinct, born to be caught and destroyed, blaspheming about matters of which they are ignorant, will also be destroyed in their destruction, suffering wrong as the wage for their wrongdoing. They count it pleasure to revel in the daytime. They are blots and blemishes, reveling in their deceptions, while they feast with you.”

The entire context of this chapter could have been quoted here because it’s all about false prophets and teachers who are “blaspheming matters of which they are ignorant” but their end is to be destruction, like all false teachers (Rev 21:8). They actually revel in their deceptions and with great duplicity still have the gall to “feast with you” or with the church. Just like Satan was as deceiver, so are these who bring false teachings. 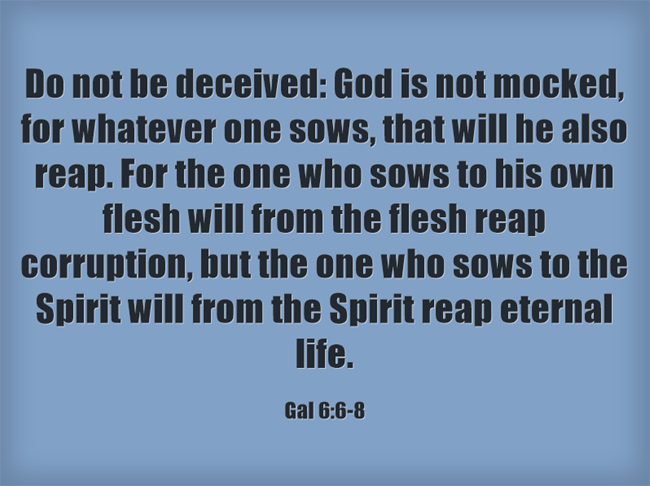 Proverbs 27:6 “Faithful are the wounds of a friend, but deceitful are the kisses of an enemy.”

I often say that I’d rather be corrected than incorrect because at least I can learn something from my mistakes but flattery or “the kisses of an enemy” do me no good at all because they’re deceitful. That’s why your friends love you enough to tell you the truth, even if it wounds you because they are wounding you to heal you.

James 1:26 “Those who consider themselves religious and yet do not keep a tight rein on their tongues deceive themselves, and their religion is worthless.”

No one can say that they love God and not bridle their tongue because “With it we bless our Lord and Father, and with it we curse people who are made in the likeness of God” (James 3:9). “Can a spring pour forth from the same opening both fresh and salt water” (James 3:11)? The deceived person’s tongue betrays them and they deceive others and are themselves deceived. Jesus said “the evil person out of his evil treasure produces evil, for out of the abundance of the heart his mouth speaks” (Luke 6:45). Like a deep well that a bucket is lowered down into, what comes out of the well reveals whether the water is truly good or not. The well might look good from the ground level but what’s deep inside tells the truth so looks can be deceiving.

Second Thessalonians 2:9-11 “The coming of the lawless one is by the activity of Satan with all power and false signs and wonders, and with all wicked deception for those who are perishing, because they refused to love the truth and so be saved. Therefore God sends them a strong delusion, so that they may believe what is false.”

The first deceiver was Satan who deceived Eve in the garden and persuaded her to take and eat from the tree of the knowledge of good and evil. First off, Satan questioned God’s word (Gen 3:1) and then he deceived her about the true consequences of her disobedience (Gen 3:5). Sadly, Eve was deceived but Adam went into it with his eyes wide open (1st Tim 2:14). The Devil is still a deceiver and today he imitates Bible teachers, pastors, and even Christian writers. He hates the truth but loves deception and stands behind some pulpits today and this is “no wonder, for even Satan disguises himself as an angel of light” (2nd Cor 11:14).

Here is a warning from Paul to not be deceived because we can’t live in sin and not suffer the consequences. I know of a couple of Christian friends of mine who do this and have deceive themselves into thinking that since they’re saved they know that God will forgive them and yes, He will forgive them, but this doesn’t do away with the consequences of their sins. That’s very dangerous ground to stand on because you cannot mock God. I have tried telling them that if they “sow to [their] own flesh [they] will from the flesh reap corruption” but it falls on deaf ears because they’ve deceived themselves into thinking that they’re just fine. That is our nature and the reason that Paul tried to warn the Galatian church.

Today more and more false teachers, pastors, and authors are saying that homosexuality is just fine but the Bible says in more than a dozen places that those who practice such things are headed for the judgment of God such as in Revelation 21:8 which speaks of the lake of fire. If they justify homosexuality as being okay then does this mean that these other sins listed here are okay too? Why not have drunkards drive the church bus? What not have known adulterers counseling those who are going to pre-marital counseling? Why not have swindlers be in charge of the church bank account or be the treasurer? You see my point. The fact is that those who do such things will not inherit the kingdom of God which leaves only one other option (Rev 20:12-15).

It is so easy to deceive ourselves. One way to avoid being deceived is to be in the Word on a daily basis. The best way to discern truth from error is to be reading the truth and that is found only in the holy Bible.

Rich and Poor?
Economists tell us how the economy goes, but God tells us how...
view all Evangelical blogs
What Are Your Thoughts?leave a comment
Copyright 2008-2020, Patheos. All rights reserved.