Here are 7 of the top Bible verses about false prophets with commentary on each one.

Matthew 24:24 “For false messiahs and false prophets will appear and perform great signs and wonders to deceive, if possible, even the elect.”

The word “many” and “false prophets” appear together so often in Scripture that this tells us that there won’t be a lot or several of them but “many,” meaning not a few. Jesus warns us about this “many” in this same chapter of Matthew 24 where He says “and many false prophets will appear and lead many astray” (Matt 24:11). The Apostle John also says “many” (1st John 4:1), Peter says “many will follow” them (2nd Pet 2:2) and in Jeremiah’s day there were also very many so this is not a select few that the writers were talking about but “many false prophets” and there seems to be no shortage of them today just as Jesus warned that there would be “many false prophets” who will “lead many astray” or I would say they will lead many away…from the truth that is.

Second Peter 2:1-3 “But false prophets also arose among the people, just as there will be false teachers among you, who will secretly bring in destructive heresies, even denying the Master who bought them, bringing upon themselves swift destruction. And many will follow their sensuality, and because of them the way of truth will be blasphemed. And in their greed they will exploit you with false words. Their condemnation from long ago is not idle, and their destruction is not asleep.”

There is a chapter break just before 2nd Peter 2:1 just prior to his saying “but false prophets also arose from among the people” and this word “but” is like a conjunction and it looks backward to the previous verses in 2nd Peter chapter 1. At the end of 2nd Peter 1 he had just been writing “For no prophecy was ever produced by the will of man, but men spoke from God as they were carried along by the Holy Spirit” (2nd Pet 1:21) so the “but” is there because Peter was saying that God inspired the authors of Scripture “but false prophets also arose among the people” indicating that the false prophets and their words are not inspired by God’s Spirit and so they are obviously false teachers. They brought in secret heresies and even went so far as to deny “the Master who bought them.” Here again we read “many” where Peter says that “many will follow their sensuality,” not a few. Just like the wolves in sheep’s clothing, they will also “exploit you with false words” and not God-breathed Scripture. 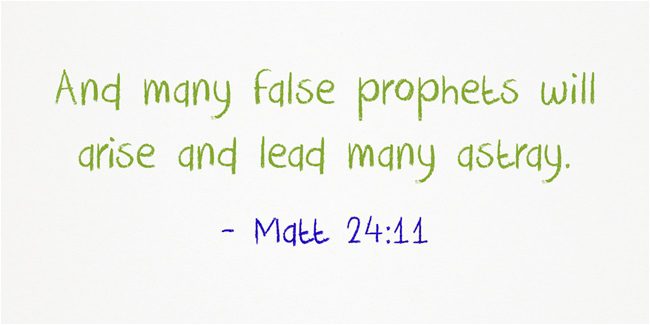 Luke 6:26 “Woe to you, when all people speak well of you, for so their fathers did to the false prophets.”

If someone is speaking well of you there is every indication that they are flattering you with falsehoods or lies. The Bible teaches that none do good and none are righteous (Rom 3:9, 12) but here I believe the context is when “all people” and even preachers always speak well of you, somethings seriously wrong. Jesus said that “so their fathers did to the false prophets.” We once had a man who came to our church and he hated that we called ourselves sinners but the Bible says we are still sinners and if we say we have no sin, we’re calling God a liar (1st John 1:8, 10) but he ignored this and still refused to say he still sinned or was a sinner. I finally told him, “I’m so sorry my friend that you say you’re not a sinner because Christ came to die for sinners.” I never saw him again.

First John 4:1 “Dear friends, do not believe every spirit, but test the spirits to see whether they are from God, because many false prophets have gone out into the world.”

I love this; John is saying to “test the spirits” and see if they’re from God or not but how can we do that? Place the teachings next to those in the Bible and it should be abundantly clear whether it’s “from God” or not. We need to test all teachings against the Word because “many false prophets have gone out into the world.” Amen?

Jeremiah 23:16 “This is what the LORD Almighty says: “Do not listen to what the prophets are prophesying to you; they fill you with false hopes. They speak visions from their own minds, not from the mouth of the LORD.”

Even in Jeremiah’s day there was no shortage of false prophets. The difference is that the false prophets had audiences that loved their messages but hated what Jeremiah was saying because he was speaking the truth and that was that they needed to repent and humble themselves before God. The true teachers of God don’t tickle the ears of the listeners (2nd Tim 4:3). I believe the Word of God comforts the afflicted but it also afflicts the comfortable. True?

Matthew 7:15 “Beware of false prophets, who come to you in sheep’s clothing but inwardly are ravenous wolves.”

False prophets aren’t interested in the truth. They are only interested in leading as many astray as they can to follow them (Matt 24:11) and they only want to exploit you (2nd Pet 2:3). They look good on the outside, just like the scribes and the Pharisees did to the people, but they are dressed in sheep’s clothing, meaning that they speak “churchianity” they look “religious” and might even appear like a true prophet but they are really “prophets for profit” or “false profits.”

Ezekiel 13:9 “My hand will be against the prophets who see false visions and who give lying divinations. They shall not be in the council of my people, nor be enrolled in the register of the house of Israel, nor shall they enter the land of Israel. And you shall know that I am the Lord God.”

If you know of a false prophet or teacher, you must confront them and tell them that God’s hand is against them and they will not be in the kingdom because they are professing “false visions” and even giving “lying divinations” but their source of not from God and that only leaves one other source and it is Satan or his demons.

I believe it makes more sense to call these false prophets “false profits” or prophets of profit for like the ravenous wolves who want to exploit, extort, and fleece the sheep, the false prophets seek to do this only “because they are turning whole families away from the truth by their false teaching. And they do it only for money” (Titus 1:11). Some even go so far as to say “that godliness is a means to financial gain” (1st Tim 6:5) where Paul was warning Timothy about false teachers with ungodly motivations (1st Tim 6:3-5) but you can be sure of this, “the time is coming when people will not endure sound teaching, but having itching ears they will accumulate for themselves teachers to suit their own passions and will turn away from listening to the truth and wander off into myths.” (2nd Tim 4:3-4) and I believe that time has come.

July 16, 2015
What Does The Bible Say About Wolves In Sheep’s Clothing?
Next Post