Here are my top 7 Bible verses about spiritual blindness with commentary that follows each.

Jesus quotes, nearly word for word, Isaiah’s prophecy about the hardening of the hearts of those who would refuse to believe in Him (Isaiah 6:10). It’s not that God has hardened their hearts or that God has blinded their eyes, but as the author of Hebrews wrote “Today, if you hear his voice, do not harden your hearts as in the rebellion” (Heb 3:12) so they are actually hardening their own hearts by refusing to hear the Spirit’s voice as in the Holy Spirit Who says, “Today, if you hear his voice” (Heb 3:7). This warning about not hearing His voice, which is the voice of the Holy Spirit, is found throughout Scripture and is repeated many times as it is again in Hebrews 4:7 where it is written “God again set a certain day, calling it “Today.” This he did when a long time later he spoke through David, as in the passage already quoted: “Today, if you hear his voice, do not harden your hearts.” The point is you must hear His voice today; you must listen to the Spirit’s voice of putting your faith in Christ. The more you suppress His voice, the harder your heart becomes until your heart reaches a point that you will not hear His voice anymore. Your heart hardens and your eyes become blinded to the glorious gospel in Jesus Christ.

Second Corinthians 4:4 “In their case the god of this world has blinded the minds of the unbelievers, to keep them from seeing the light of the gospel of the glory of Christ, who is the image of God.”

The spiritual blindness of those who hate Christ comes not only from a refusal to hear the Spirit’s voice but also from the blinding by Satan, “the god of this world.” He has so blinded the minds of the unbelievers that they can’t see the light of the gospel of Jesus Christ. God will move heaven and earth if a person genuinely seeks to know God but suppressing the knowledge of God, time after time, is where God finally gives them up to the lusts of their own flesh and Satan keeps them in darkness.

No wonder most of the Jews refused to believe in Jesus Christ; the teachers of the law and the Pharisees were blind guides so it was like the blind leading the blind. The saying “there is none so blind as those who refuse to see” is true just as it was of the religious leaders in Jesus’ day. The problem for these blind leaders was that they “trusted in themselves that they were righteous, and treated others with contempt” (Luke 18:9) and Jesus rebuked them for this by saying “You are the ones who justify yourselves in the eyes of others, but God knows your hearts. What people value highly is detestable in God’s sight” (Luke 16:15). 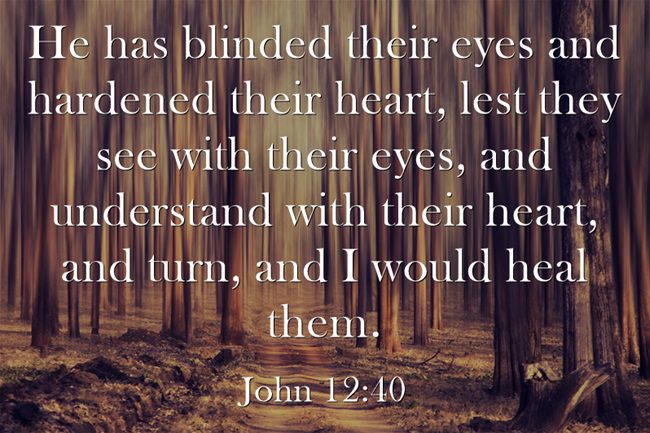 Just as in Jesus’ day, ancient Israel also had spiritual blindness and was dull of hearing. Time and again they refused to obey God and instead, fell into idolatry and this caused God to chastise them by sending them into captivity. Jesus quoted this in John 12:40 because they were refusing to see and closing their ears intentionally so that they could not “turn and be healed” of their sins.

Zephaniah 1:17 “I will bring distress on mankind, so that they shall walk like the blind, because they have sinned against the Lord; their blood shall be poured out like dust, and their flesh like dung.”

Zephaniah’s serious prophecy of the destruction that was to come upon, not just Judah and Israel, but upon all of mankind was because of their refusal to turn to the Lord. Sin has a way of blinding those who are living in it and the result is that God has no choice but to punish the wicked, even though God takes no pleasure in their death (Ezk 18:23, 32).

Many profess to be Christian but their behavior betrays them. They claim to be Christ’s but they don’t even know that they’re walking in darkness. If they say they love God but hate the brothers and sisters, they are just giving lip service to Christ and will be exposed as false converts on the day of Jesus’ return (Matt 7:21-23). They are the tares growing up alongside the wheat. I had a lady once tell me that she loved God but could not stand being around the people in the church. I am a father and so if someone came up to me and told me that they loved me but hated my children, I’d have a problem with that! See my point?

Matthew 15:14 “Let them alone; they are blind guides. And if the blind lead the blind, both will fall into a pit.”

I briefly touched on this idea earlier when the blind guides, the teachers of the law and the Pharisees, were leading others into a pit. They themselves couldn’t see the weightier matters of mercy and justice and faith and Jesus warned “What sorrow awaits you teachers of religious law and you Pharisees. Hypocrites! For you are careful to tithe even the tiniest income from your herb gardens, but you ignore the more important aspects of the law–justice, mercy, and faith” (Matt 23:23).

There are certainly more than seven verses about spiritual blindness in the Bible such as in Isaiah 43:8 where he wrote “Bring out the people who are blind, yet have eyes, who are deaf, yet have ears” and in Deuteronomy 28:28-29 where it was said that “The Lord will strike you with madness and blindness and confusion of mind, and you shall grope at noonday, as the blind grope in darkness, and you shall not prosper in your ways. And you shall be only oppressed and robbed continually, and there shall be no one to help you” and even in Isaiah 42:18 where God pleads with them, “Hear, you deaf, and look, you blind, that you may see” but they refused to listen and to see because they hardened their hearts and refused to hear the Spirit’s voice. I pray you do not do likewise.