What Does The Eagle Represent In The Bible? A Christian Study

Does the eagle have special meaning in the Bible and if so, what does it represent?

The Eagle Bears us Up

The image of God as an eagle is found throughout the Bible but primarily in the Old Testament. It is a sign of strength and able to bear much weight, as Moses wrote, “You yourselves have seen what I did to the Egyptians, and how I bore you on eagles’ wings and brought you to myself” (Ex 19:4). This is further symbolized when Moses said of God “Like an eagle that stirs up its nest, that flutters over its young, spreading out its wings, catching them, bearing them on its pinions” (Duet 32:11). The eagle can bear up the young eaglets on its pinions, which are the outer wings. This is basically what God did when He brought Israel out of captivity from Egypt and continued to bear her up in her wanderings in the wilderness.

The psalmist often referred to God in the imagery or as having the attributes of an eagle and especially when he wrote that it was God “who satisfies you with good so that your youth is renewed like the eagle’s” (Psalm 103:5). Isaiah also saw the symbolic strength of God as depicted in an eagle when he wrote “but they who wait for the Lord shall renew their strength; they shall mount up with wings like eagles; they shall run and not be weary; they shall walk and not faint” (Isaiah 40:31). 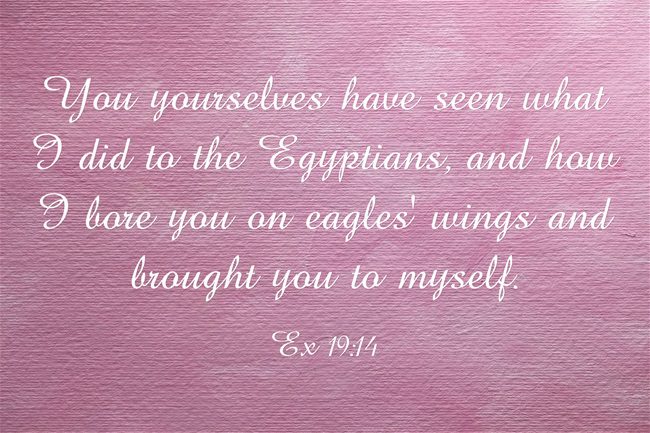 The Eagle as God’s Rod against Israel and Judah

God also uses the eagle in the Bible to describe different powers which will come down swiftly upon Israel if she refuses to live in obedience to Him. God spoke through Jeremiah in warning Judah about a coming threat from the north by stating “Behold, he comes up like clouds; his chariots like the whirlwind; his horses are swifter than eagles—woe to us, for we are ruined” (Jer 4:13). If the nation continues in idolatry and refused to repent even after being warned, God thunders “The Lord will bring a nation against you from far away, from the end of the earth, swooping down like the eagle, a nation whose language you do not understand” (Duet 28:49). These “pursuers were swifter than the eagles in the heavens; they chased us on the mountains; they lay in wait for us in the wilderness” (Lam 4:19). Further, Habakkuk says much the same thing if Israel refuses to repent, writing about the coming enemy “Their horses are swifter than leopards, more fierce than the evening wolves; their horsemen press proudly on. Their horsemen come from afar; they fly like an eagle swift to devour” (1:8).

The Eagles as God’s Rod against the Nations

God also uses the language of a swooping eagle even against the nations surrounding Israel “Behold, one shall mount up and fly swiftly like an eagle and spread his wings against Bozrah, and the heart of the warriors of Edom shall be in that day like the heart of a woman in her birth pains” (Jer 49:22). Whichever nation exalts itself against the Most High, God says “Though you soar aloft like the eagle, though your nest is set among the stars, from there I will bring you down, declares the Lord” (Obadiah 1:4).

The Eagle as God’s Protection

God refers to Himself as an eagle for several different reasons and one example is of His protective nature as in Psalm 91:1-4 “He who dwells in the shelter of the Most High will abide in the shadow of the Almighty. I will say to the Lord, “My refuge and my fortress, my God, in whom I trust. For he will deliver you from the snare of the fowler and from the deadly pestilence. He will cover you with his pinions, and under his wings you will find refuge; his faithfulness is a shield and buckler. ” Eagles represent sovereignty and supremacy and how fitting since God is the real ruler of kings and presidents (Dan. 2:20-21/5:18-21, Prov. 8:15-16, Rom. 13:1-2) but also, when the storms hit, eagles can fly far above the storms, indicating that God is never affected by conditions for He is also sovereign over nature.

If you have ever watched an eagle soar, it is nearly motionless and stationary. This absolute lack of movement makes it naked to the eyes of its prey. This majestic bird may have a wing span over eight feet and weigh up to 15 pounds and live up to 40 years. Eagles are indigenous to North America but they used to be predominant in Palestine at one time. They are also the most attentive parents of all the bird species and perhaps the greatest teachers of their young, and like doves, they will remain monogamous until death. God is like an eagle, He covers us and He shadows us (Psalm 36:7, 63:7, 91:1-4, 1st King 8:7), covers us (Psalm 91:1-4), hides us (Psalm 17:8) and is even under us (Psalm 36:7).

July 17, 2015
What Does Water Represent In The Bible? A Christian Study
Next Post

July 17, 2015 What Does The Bible Mean When It Uses The Term “Fruit”?
Recent Comments
34 Comments | Leave a Comment
"Is there a positive correlation between human violence and holy books which contain texts of ..."
John Arthur Why Is Violence Escalating In America?
"Mary was not requesting that generations would call her blessed, she was saying that generations ..."
Cath 3 Examples Of Answered Prayers In ..."
"Spells are simply mumbo jumbo and anyone who believes in their ability to work is ..."
John Arthur 5 Prayers For A Cheating Spouse
"please read my story https://uploads.disquscdn.c..."
SANGOMA NANA 5 Prayers For A Cheating Spouse
Browse Our Archives
Follow Us!