Was Lucifer A Fallen Angel? A Bible Study

Most of the better manuscripts and different translations that I have checked do not actually have the name Lucifer in them. The King James Version as well as a few others does say in Isaiah 14:12 “How art thou fallen from heaven, O Lucifer, son of the morning! how art thou cut down to the ground, which didst weaken the nations!” The Hebrew word Isaiah uses is “heylel” and it means “light-bringer, shining one” or “morning star” so even though most translations don’t use Lucifer, the meaning behind this name is often given as “O Day Star” or “Morning Star” and it is generally understood to be Lucifer and the fact that it’s capitalized means that it’s a proper noun which gives an indication of it being someone’s name and in this case, and most Bible scholars are in agreement, that it is speaking about Lucifer, Satan, or the Devil.

Satan in the Old Testament

In 1st Chronicles 21:1 it says “Then Satan stood against Israel and incited David to number Israel” and the Hebrew word for Satan is exactly the same and it means “adversary, one who withstands.” This is exactly the role that Lucifer or Satan plays today as he did then. He is God’s adversary, even though he’s no match for God, and he is our adversary too like he was in inciting David to sin in numbering the troops of Israel. He also “withstands” God and has been, ever since his fall. He is also withstanding God by willful and malicious disobedience. He is behind the rulers of the world too (Eph 2:2) as he weakens the nations (Isaiah 14:12b) and is continuing to do so till this very day. 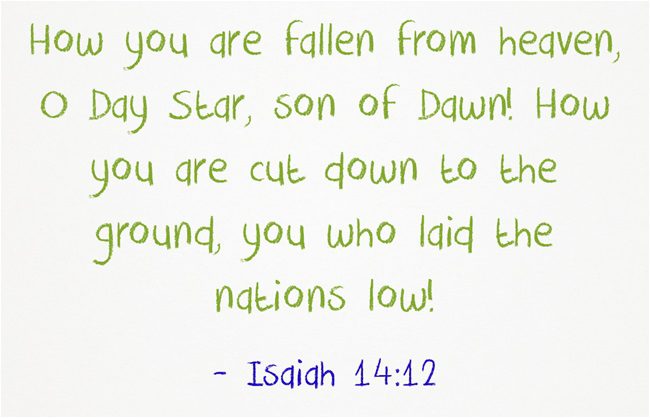 Job also dealt with Satan, even though he had no idea, but this was a one-on-one confrontation where “the sons of God came to present themselves before the Lord, and Satan also came among them” (Job 1:6). There is good reason to believe that Satan is very much like a roaring lion roaming about, seeking whom he might devour as Peter wrote (1st Pet 5:8). God asked Satan “From where have you come?” Satan answered the Lord and said, “From going to and fro on the earth, and from walking up and down on it” (Job 1:7) indicating that Lucifer or Satan has free reign over the earth but that doesn’t mean he is in full control or can do anything he wants. Martin Luther once said that even the “Devil is God’s Devil” and we see this when God allowed Satan to afflict Job but gave him limits: “And the Lord said to Satan, “Behold, all that he has is in your hand. Only against him do not stretch out your hand (kill him)” (Job 1:12).

How and why did Lucifer Fall?

Isaiah seems to describe the why and how of Lucifer’s fall in Isaiah chapter fourteen and in verse twelve it says “How you are fallen from heaven, O Day Star, son of Dawn. How you are cut down to the ground, you who laid the nations low!” Why did Lucifer fall? Isaiah 14:13a says “You said in your heart, ‘I will ascend to heaven; above the stars of God I will set my throne on high.” Lucifer wanted to ascend “above the stars of God” or the angels of God and said to himself “I will set my throne on high” or really, he wanted to be the most high and sit in the place of God. He still has that passionate desire so that he can be worshiped. This is clear when he said “I will sit on the mount of assembly in the far reaches of the north” (Isaiah 14:13b). The assembly is the assembly of worshiping angels and to sit on the mount of “the far reaches of the north” is a desire to sit on the very throne of God.

Lucifer’s Desire to be God

Lucifer or Satan not only wanted to ascend above the angels of God but He wanted to be God as Isaiah writes “I will ascend above the heights of the clouds; I will make myself like the Most High” (Isaiah 14:14). You could read this as “I will be the Most High” and since the words “Most High” is capitalized, this is talking about God Himself. Instead of being exalted, God says he would be “cut down to the ground” (Isaiah 14:12). The Hebrew word for “cut down” is “gada`” and means “to chop down, to cut,” or “to shave off” so instead of ascending “above the heights of the clouds” he will be “chopped down” or really, cast down. So this makes clear that Satan or Lucifer fell as Isaiah 14:12a says “How you are fallen from heaven” or cast down from heaven; the heaven where God’s throne resides. By the way, the “heights of the clouds” that Lucifer wanted to ascend above is clearly the Shekinah clouds of the glory of God.

God resists the proud (Prov 3:34; 1st Pet 5:5; James 4:6) and this is why Lucifer or Satan fell. He was an angel of God, perhaps at one time worshiping God himself but he became full of himself and overestimated himself because of his own beauty and glory (Ezk 28)and reasoned within himself, I want to be God. The result was that Lucifer fell and thus, he became a fallen angel and he is our enemy but Jesus triumphed over him at the cross. There are still spiritual wars and skirmishes going on but the victory is assured for all who have repented and trusted in Christ.

July 22, 2015
Who Were The Scribes In The Bible? A Christian Study
Next Post