What Is The Biblical Difference Between Meekness and Humility?

What Is The Biblical Difference Between Meekness and Humility? July 23, 2015 Jack Wellman

Are meekness and humility different? Are they the same? What’s the difference between the two?

One of the best definitions of meekness that I have ever read is that it is strength under control. Meekness does not mean weakness and being a doormat so that everyone can walk all over you. The definition of meekness is someone who is humble, teachable, and patient under suffering. The person who has meekness means that they have the absence of any feelings of being better than others. This also means that they are modest and lowly in spirit.

Humility is a lot like meekness. For example there is also the absence of any feelings of superiority or of being better than others and it is seen as the act or posture of lowering oneself in relation to others and there is an absence of pride or self-assertion. Someone with humility tends to esteem others better than themselves and often puts others interests ahead of their own interests. Again, it doesn’t mean being a doormat so that everyone can walk all over you and take advantage of you and it is not groveling in front of other people. It is an attitude towards oneself more than toward others. 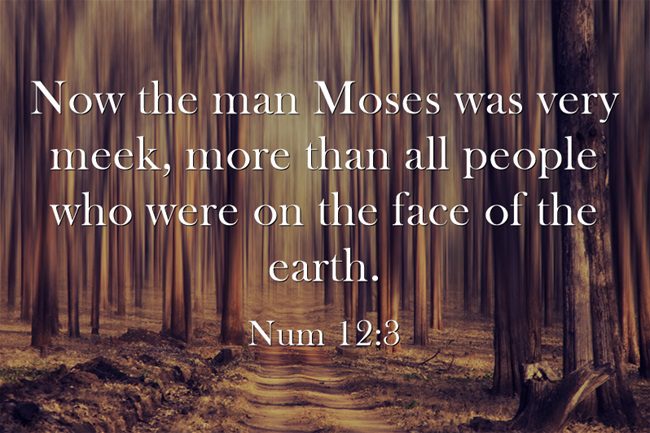 The Meek are Blessed

Jesus pronounces a blessing on everyone who is meek such as in Matthew 5:5 where He said “Blessed are the meek, for they shall inherit the earth.” Who will inherit the land in the kingdom? The Bible says that “the meek shall inherit the land and delight themselves in abundant peace” (Psalm 37:11). Moses was called meek but he certainly wasn’t weak. The Bible says “Now the man Moses was very meek, more than all people who were on the face of the earth” (Num 12:3) but there is no sign of Moses every being weak. In fact, it was just the opposite as we see Genesis 2:16-17 “Now the priest of Midian had seven daughters, and they came and drew water and filled the troughs to water their father’s flock. The shepherds came and drove them away, but Moses stood up and saved them, and watered their flock.” Here was one man who took on several shepherds and drove them away from harassing the seven daughters of Midian. We don’t know how many there were but there were probably more than three or four. Here was one man, Moses, who drove them all away even though he was called the meekest man on earth.

The Humble are Blessed

Jesus once said that “Whoever humbles himself like this child is the greatest in the kingdom of heaven” (Matt 18:4) because “Whoever exalts himself will be humbled, and whoever humbles himself will be exalted” (Matt 23:12). Even our Lord and Savior “being found in human form, he humbled himself by becoming obedient to the point of death, even death on a cross” (Phil 2:8). Jesus was humble but no one would say He was weak! James writes that “God opposes the proud, but gives grace to the humble” (James 4:6) which is just what Peter wrote (1st Pet 5:5). Solomon knew that “with the humble is wisdom” (Prov 11:2) so it’s the smart thing to do for “He leads the humble in what is right, and teaches the humble his way” (Psalm 25:9). Do you want God to reward you? Then know this, “The reward for humility and fear of the Lord is riches and honor and life” (Prov 22:4).

Everyone who has humility has meekness and every person with meekness is likely also humble. Meekness is contrasted with humility as referring to behavior towards others, where humbleness refers to an attitude towards oneself but is still seen by others. Both are attributes of a godly person and they are fruits of the Spirit. God will not save those who are proud and have a pride-filled heart but He will only “save all the humble of the earth” (Psalm 76:9) as “he adorns the humble with salvation” (Psalm 149:4).